Wind and solar accounted for nearly 10% of global electricity generation in the first half of the year, according to new analysis.

Many countries now generate about a tenth of their electricity from wind and solar, the analysts noted, but there are several key exceptions, including Russia (0.2%), Canada (5.3%) and South Korea (4.0%), energy research company Ember noted.

And since 2015 – the year the Paris Climate Agreement was signed – wind and solar have captured a five-percentage-point market share from coal.

However, despite wind and solar’s market share increasing by 1.7 percentage points from last year, the energy transition is not taking place fast enough to limit global warming to 1.5C above pre-industrial levels, Ember warned.

Dave Jones, senior electricity analyst at Ember and one of the authors of the report, said: “Countries across the world are now on the same path – building wind turbines and solar panels to replace electricity from coal and gas-fired power plants.

“We have the solution. It’s working. It’s just not happening fast enough.”

Wind and solar generated 1,129TWh in the first half of the year, accounting for 9.8% of electricity generation in the 48 countries analysed in Ember’s global half-year electricity report. Together, these countries make up 83% of global electricity production, the researchers noted.

China generated the most wind power (237TWh) in the first half of the year, ahead of the United States (175TWh). The two market leaders also had the greatest increases in generation in absolute terms: Chinese wind generation rose by 23TWh in H1 2020, while US production increased by 22TWh.

Meanwhile, the biggest yearly changes by percentage happened in Russia (up 236%), Colombia (up 114%) and Argentina (up 76%). However, wind accounted for only 0.2%, 5.3% and 6% of each country's total generation respectively in the first half of the year.

Coal generation fell 8.3% in the first half of 2020 – its sharpest ever drop, Ember noted. The researchers mostly attributed this to a 3% reduction in global electricity demand because of the coronavirus pandemic, and, to a lesser extent, rising wind and solar generation.

Wind and solar have nearly captured a five-percentage-point global market share from coal since 2015, the year of the landmark Paris deal. 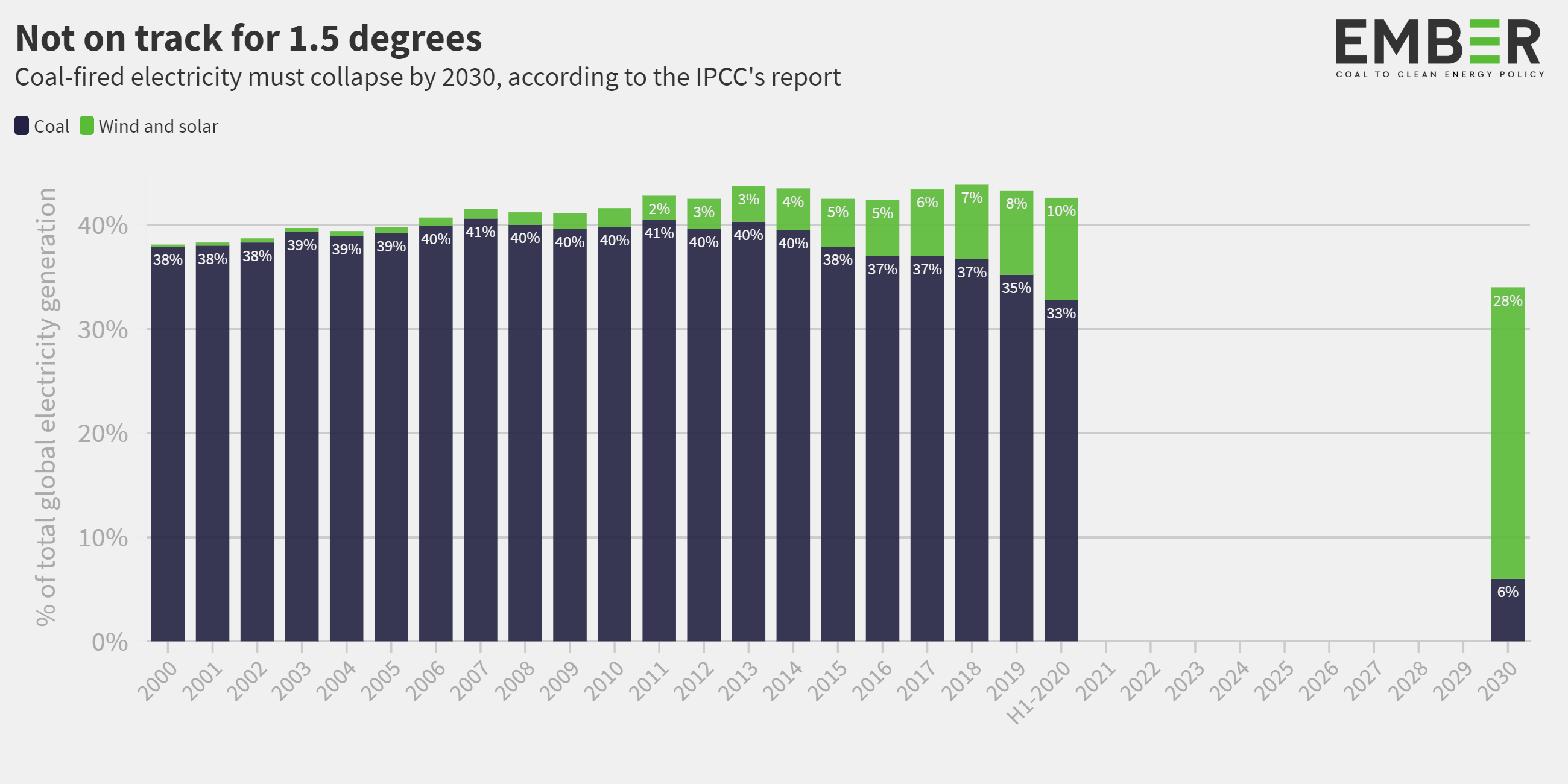 However, if the world is to limit global warming to 1.5C, coal generation needs to fall by 13% every year this decade, and should account for just 6% of global generation by 2030, according to the IPCC.

In the first half of 2020, despite lower electricity demand due to the coronavirus pandemic, coal generation has only fallen by 8% from the same period one year earlier.

Ember concluded that this suggests that the global energy transition is off-track to limit global warming to 1.5C above pre-industrial levels.