Dongfang Electric Corporation has recenty commissioned China's first 10MW offshore prototype, and is propelling its onshore turbines well in to the emerging 5-6MW supersized rotor sector. We spoke to DEC's technology experts about the company's plans to scale-up its direct-drive onshore and offshore turbines, and build on its growing international presence.

The Covid-19 crisis caused considerable delays in the installation of Dongfang’s D10.0MW-185. “Such delays are unfortunate, but our confidence in the turbine’s capabilities was such that we pressed ahead with the prototype,” says R&D vice-director Mr Zhaowei. “It is further a commercial sale to a wind-project developer [Fujian Xinghua Bay, phase 3] with another ten units planned.

“The D10000-185 has set three records,” he continues. “It is Asia’s most powerful turbine at 10MW, has the biggest rotor diameter at 185 metres, and the 90-metre blades are the longest ever fitted to a Chinese turbine.”

Scaling up to 10MW — DEC’s largest previous offshore turbine was a 5MW geared machine (see below) — represented a big step, while the turbine had to meet another goal, a design life of at least 25 years. Zhaowei adds that these scaling challenges also apply to component suppliers, which had never produced such large-scale parts before. DEC focused its attention on the castings (nacelle bedplate, main carrier and hub castings), large-size bearings, and blades.

“Developing a 10MW-rated direct-drive PMG turbine represented no real bottlenecks because we could benefit from over 60 years in-house know-how and experience with building large-scale electric machines for industrial and utility-power generation,” says Zhaowei. “Our generators for both onshore and offshore direct-drive models are standard outer-rotor designs with single piece (inner) stator ring.”

The huge air-cooled 10MW generator has an outer diameter of around eight metres, a mass of over 250 tonnes, and it operates at 3.15kV rated medium voltage. The compact drivetrain further incorporates a main bearing unit, which consists of a hollow stationary inner shaft, two taper-roller bearings, and a rotating part supporting rotor and generator-rotor. 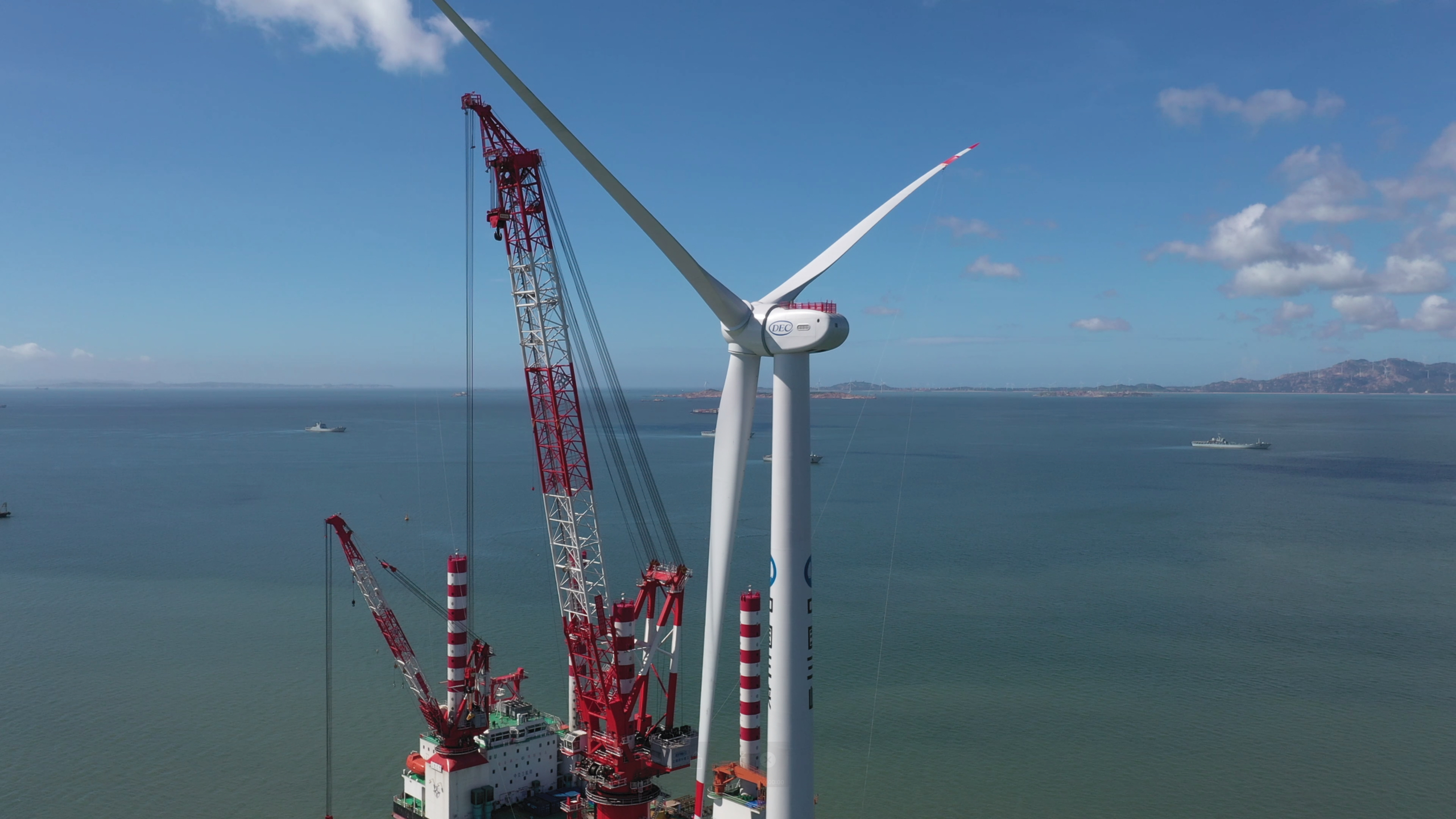 “The main electrical components, including converter and MV-transformer, are for maintenance convenience located in the tower base. This allows for a smaller-size nacelle that offers enhanced protection against typhoon-related impacts,” Zhaowei explains. “Furthermore, the generator electrical system is designed in two single independent circuits, which provides operational redundancy through enabling the turbine to continue operation at 50% output level in the event of a failure in one circuit.”

The D10.0MW-185 features an in-house developed electric pitch system, and in-house blades made in glass and carbon fibre (main beam) reinforced epoxy (G&CFRE) with 34-tonne mass each. This is a competitive value considering blade dimensions, offshore high-wind IEC I (S) certification, and in being part of an “active typhoon resistance strategy” up to 77m/s survival wind speed. The blades feature state-of-the-art saw-tooth trailing-edge and vortex generators add-ons. According to DEC, the turbine generates annually 4,093 full load hours (40,930MWh) at 10m/s mean wind speed.

“We have proven our capabilities with the D10.0MW-185, and this is just the beginning,” says Zhaowei in a joint discussion with director of overseas marketing Mr Wuce. “The current 490-tonne nacelle mass has considerable potential for further optimising, and generator built-in reserves allow for upgrading to 11-12MW with an enhanced rotor diameter of over 210 metres. “The prototype has in fact already produced power at over 11MW level. Further in the pipeline are a new 12-15MW platform with rotor diameters in excess of 220m, plus a floating offshore project we have been working on for over a year now. This will likely incorporate one or more 7MW turbine(s) and a prototype planned next year in China.”

“The prototype is planned for later this year, again offshore, and we expect the D7.0MW-186 to become a future ‘star product’ for China and typhoon-prone countries and regions in the Asia-Pacific. These include markets like Vietnam, South Korea, The Philippines, and Indonesia. An additional focus is at other international wind markets including in Europe.”

The D7.0MW-186 produces 4,028 full-load hours at 8.5m/s mean wind speed, corresponding to an AEP of 28,196MWh, and an ongoing parallel focus at continued product optimizing. Already over 1GW confirmed orders were booked for projects in three Chinese provinces.

All onshore blades come only in glass-fibre reinforced epoxy — even this latest 85-metre component – with the main reason given as the cost of carbon.

“Transporting these large blades by road will not be a big issue, because manufacturing facilities will be built in the vicinity of future wind farms within these regions. Segmented onshore blades are currently not in focus and would require extensive R&D effort, whereby guaranteeing operational safety for up to 25-year design life is key,” they say.

The second new onshore model in development is 6.0MW with a 164-metre rotor, mainly targeted at international markets and especially Nordic countries, with series ramp-up set for the first quarter of 2022. DEC, in addition, is actively working on new tower solutions for the 120-160m+ range including conventional and modular steel designs and concrete-steel hybrids, the latter together with local partners.

Entering international offshore markets is one of DEC’s key priorities, for which a new department was established in 2018 with the main task to explore new market models inside and outside China. The search for international market opportunities focuses especially at the upgraded 10MW platform targeted at the large mature European offshore market.

"Certification according to IEC standards and open communication about operational record are thereby crucial, and so is our willingness to learn from others,” they say, and conclude: “DEC is open to localisation options especially regarding nacelle assembly, tower and blade manufacture. In parallel, we seek experienced European partners in multiple areas including port logistics, offshore transport and installation, and in setting up efficient upkeep solutions for the long-term.” 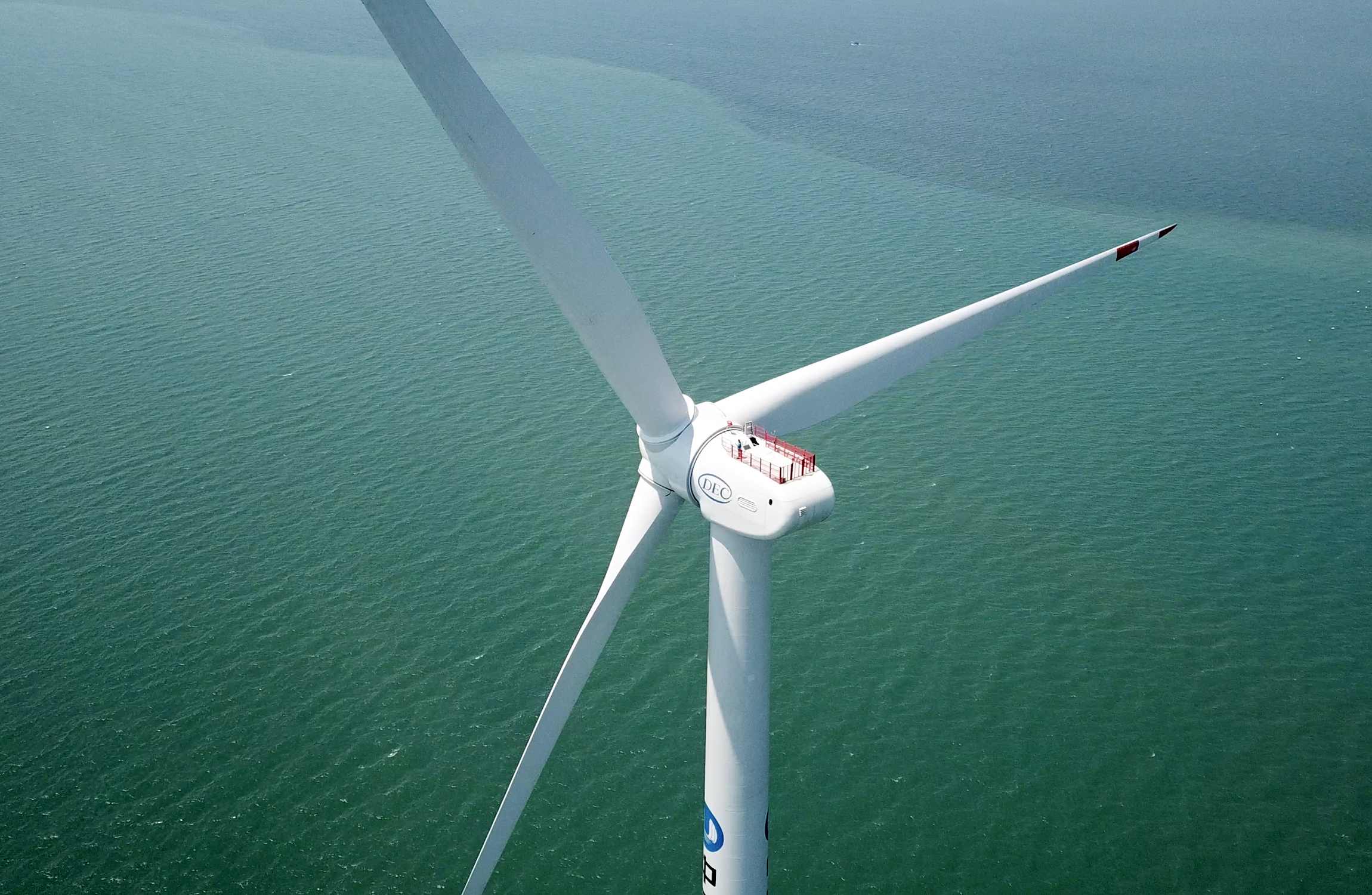 Dongfang’s wind activities commenced in 2004 through entering a cooperation with Repower (later Senvion) of Germany, likely using its MD70 high-speed geared DFIG-based technology and a prototype a year later. The 2MW successor model was already a full in-house product development that evolved step-by-step into the 2MW platform today reduced to two model variants, the G2000-127 and 2.2MW G2200-135. The 2MW platform serves the local market only.

During 2008 two subsidiaries were merged and renamed Dongfang Electric Corporation (DEC), and, in parallel, a start was made in developing in-house direct drive wind technology. The first 1.5MW prototype was installed a year later in Inner Mongolia.

In 2010 DEC entered into a co-development agreement with US-based AMSC for a 5.0MW high-speed geared offshore turbine, featuring 140-metre rotor diameter and PMG. The FD140-5MW prototype for IEC I was installed in 2012, followed by a second prototype at Rudong Intertidal project a year later. This turbine model is still part of the offshore portfolio but is considered too small for current market demands.

The Chengdu-based company is today a leading power equipment supplier employing 17,000 global staff, with power generation activities ranging from gas-fired, hydro, nuclear, to solar and a fast-growing wind business base.