The compact “lightweight” E-160 EP5 E1 flagship for IEC IIIA sites is fitted with custom-developed 78.3-metre LM blades for one of the wind industry’s largest onshore rotor diameters at 160 metres. These are also the longest blades ever to be fitted on an Enercon turbine.

The prototype features a 120-metre bolted wide-base modular steel tower (MST), but there will be a 166-metre hub-height option too, plus various other tower solutions. Enhanced ‘Mark 2’ MSTs are being increasingly deployed for Enercon’s EP3 turbines, and now being extended to the EP5 platform, because the company considers these the most efficient in terms of transport logistics.

Normal tubular steel towers offer an economical solution for lower hub heights and in international markets, but demand for classic concrete-steel hybrids is falling and the latest next generation hybrid towers are now being phased out.

Scholle says that the pathway towards E-160 prototype completion and the installation process itself faced specific Covid-19-related challenges, including minor delays prompted by supply chain issues.

The completion of the E-160 prototype comes only months after Enercon commissioned five 4.3MW medium-wind E-147 EP5 E1 pre-production turbines, four operating in Finland and one in Germany. A prototype of the envisaged 5.0MW E-147 E2 upgrade is planned later this year.

When Enercon acquired Lagerwey in late 2017, the small Dutch supplier operated two L136-4.5MW prototypes at a coastal location in the north of the country. The 4.65MW E-136 EP5 is essentially a modest enhancement of the original Lagerwey flagship and forms the basis of the EP5 platform. The E-147 EP5 and E-160 EP5 platform extensions were announced less than a year later. 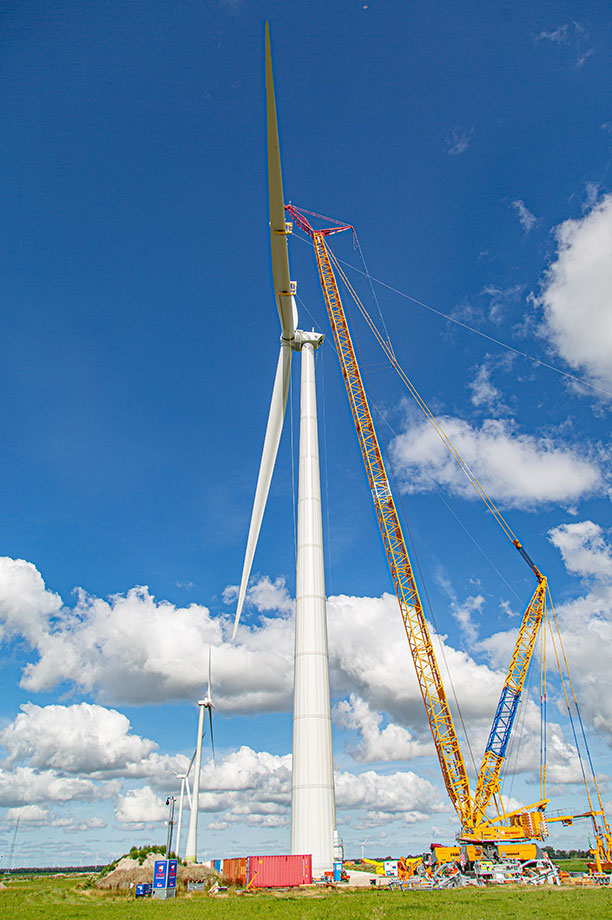 “The E-160 E1 (pictured) represents the latest milestone in our technology transition,” says Scholle. “But to stay aligned with the competition under today’s highly dynamic market conditions requires thinking ahead and acting swiftly. We have therefore already decided on an E2 upgrade of the E-160, with a 5.5MW power rating, with a prototype around the end of the year,” he says.

Scholle adds that the E2’s extra 900kW installed power boosts AEP by roughly 9%, which can be equated to over 21,500MWh on reference sites with 7.5m/s mean wind speed. Increasing power ratings is at the heart of Enercon’s strategy, and a key design driver for yield enhancement and LCoE reduction. We have already seen the evidence of this from the E2 versions of the E-138 (see box), and E-147.

High ratings and large rotors are a winning combination, says Scholle, but the prevailing wind conditions of the site have to be adequate.

Scholle is not currently considering additional variants adapted to the low and ultra-low-wind (about 6m/s mean wind conditions) that are not uncommon in China and India, requiring turbines with specific power ratings in the 160-170W/m2 range.

“Most low-wind markets are difficult to enter because they require high towers and large rotors, which are expensive and only viable for local suppliers with a low-cost supply chain,” he says.

“And because all major wind markets — including new ones in South America — are now auction driven, this clearly pushes everything towards achieving the lowest possible LCoE. The overall market conditions typically demand large-size turbines with big rotors and power ratings to match.”

The impact of a tiny percentage in yield gain — even less than 1% — adds up to substantial revenue for large-scale turbines with AEP levels in the 15-20,000MWh range.

The E-160’s upgrade to E2 specification is the main focus of product development, taking priority over the less complex E-147. Both EP5/E2 variants are essential to Enercon’s ambitious technology transition agenda, but it is the E-160 that is attracting the most interest from developers. The E-136 EP5 is a niche product for high-wind sites but has attracted some substantial provisional orders.

The E-147 and E-160 share the same enlarged permanent magnet generator (PMG) layout, but the E-160 rotor and direct-drive generator combination turns slower due to the larger rotor size. This means higher generator torque and more internal heat to be dissipated for similar power output. Scholle adds that this was a main reason for the reduced (initial) output of the 4.6MW E-160 E1 against the 5MW for the E-147 E2.

“Fortunately, we could retain a mainly unchanged generator layout for the E-160 E2, which included an outer diameter of under six metres, a critical dimension for road transport,” says Scholle. “This was enabled by reuse of the thermal reserves within the generator, and by retaining the largely passive [i.e, no circulation pumps and fans] air-cooled generator design.”

Measuring and validating the individual engineering concepts and features under real-life conditions is fundamental to the development of the turbine platform. The E-160 E1 design, in parallel with the PMG application, marks Enercon’s first step into the ultra-large rotor segment. The enhanced E-160 E2 represents the primary design basis for developing additional future PMG-based direct-drive models with higher nominal power and yield potential. 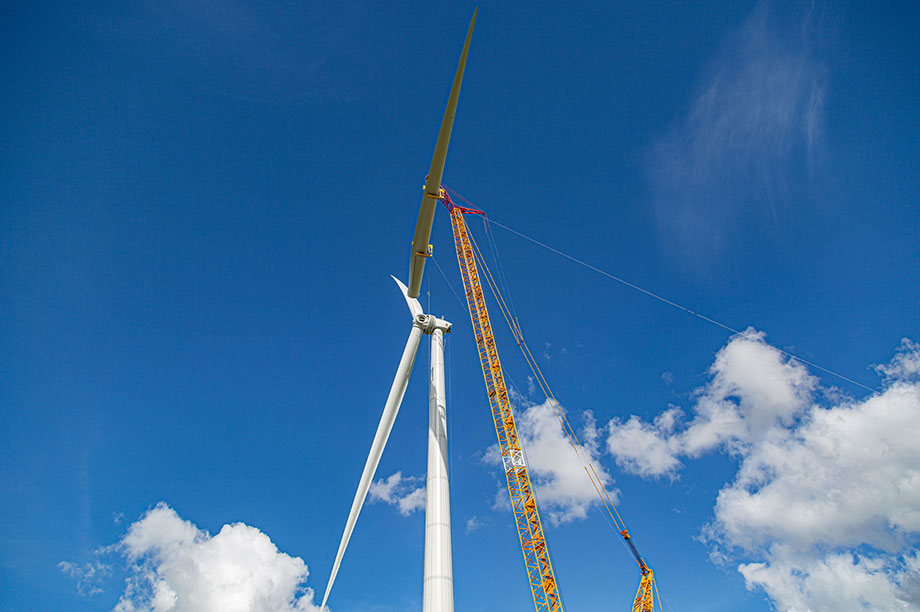 The last blade was installed on the E-160 prototype this week (pic: Klaas Eissens)

“An essential part of our technology transition is cross-optimisation between platforms,” says Scholle. “Major benefits could already be achieved by feeding-in experiences we’ve learned from the E3 into the EP5 platform — and the other way around. These optimisations range from hardware-related loads to loads-reduction through advanced control, plus reducing lifting masses, enhancing transportability, rigorous simplifications and cost-outs wherever feasible to enable industrialisation at large volumes.”

A large part of Scholle’s job is dedicated to guiding different teams in thinking about fresh ideas for the post E-160 E2 era. Because direct-drive PMGs remain a core future technology, generator Dutch and German teams have already been integrated within Enercon’s WRD R&D centre. However, new generator concepts are only part of the story. R&D activities extend to whole new turbine concepts, all production and process stages including reduction of lifting masses, efficient transport-logistics and shipping, installation and grid connections simplification, lifetime upkeep, and end-of-life decommissioning.

Scholle concludes: “Future developments require continuous evaluation of current solutions and simultaneously looking ahead for new products as a top priority and with maximized added value to our customers. Another ongoing topic is optimal turbine size, whereby ongoing scaling could hit some technical limits regarding main components like blades and hubs getting so big that they become difficult to transport. However, physical space for increasingly larger turbines is not unlimited either, and a typical aspect whereby cost, risk and ambition with for instance required total height must be weighed against public acceptance.”

Development of the EP3 platform which features classic externally excitated generators, started in early 2017. The E-126 and E-138 are the first EP3 models commercially available, and the E-115 EP3 prototype for high-wind sites will be installed later this year.

The 3.5MW E-138 EP3 E1 prototype has been operating at the Dutch Wieringermeer site since spring 2019. The upgraded 4.2MW E-138 EP3 E2 prototype, offering an extra 1,500MWh AEP over the E1 version at sites of 7.5m/s wind wind speed, has been generating electricity since March at a site in Schleswig-Holstein. Production ramp-up is now gaining pace in several markets with around 160 units to be delivered by the end of the year, and larger volumes expected from 2021 onward.

Enercon has been employing a new method for the fitment of the massive blades on the E-160 prototype. The blade gripper part, functionally comparable to competitor devices, comes with an in-house hub rotating tool temporarily mounted to the hub installing the second and third blade. The method was used first for the installation of the E-147 EP5’s in Finland and since adapted for the larger E-160 EP5.

It replaces here Enercon’s patented, uncomplicated and much used solution for its own in-house blade developments, including the segmented blades of the previous 4.2MW E-141 EP4 flagship. The solution comprised only two premanufactured holes in the upper and lower skin blade structure relative to the blade’ centre of gravity. A sling arrangement forms a triangle for crane hook attachment. When a blade is lifted off the ground, it remains horizontal and perfectly stable. After installation, the holes are closed from the inside.