Just 219MW of new offshore wind turbines was commissioned in the first half of 2020, 118MW of which had been installed in 2019 but was only connected to the grid this year, bringing the cumulative operational capacity to 7,760MW by the end of June, according to Deutsche Windguard data. More than 1GW was commissioned in the whole of 2019.

The next German offshore wind projects to be realised will be those awarded in tenders in 2017 and 2018, which are due to come online between 2021 and 2025.

Tenders are planned to resume from 2021. 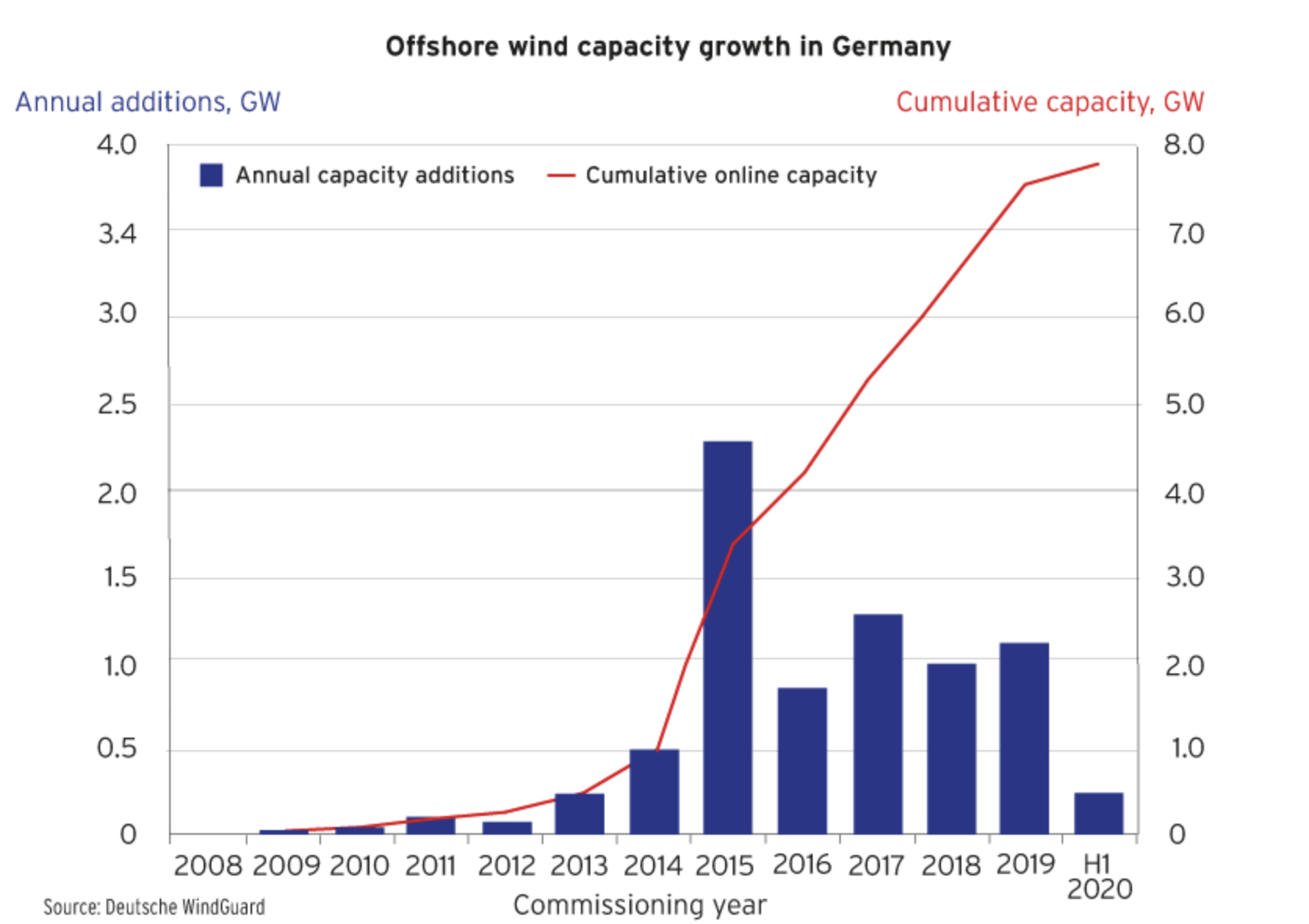 With the capacity from projects already online and awarded at tender, Germany’s operational offshore wind fleet is due to reach 10.8GW by 2025 — 9.2GW short of the government’s 20GW target for 2030.

To meet the government's 2030 target, more connection capacity would need to be approved and added, it pointed out.

In a joint statement issued following publication of Deutsche Windguard’s H1 2020 report, wind industry groups welcomed the security offered by the governments’ long-term targets for offshore wind: raised from 15GW by 2030 to 20GW by 2030 and then to 40GW by 2040.

But with just 219MW brought online in the first half of 2020, and no new projects due online until next year, the groups stated that the German offshore wind industry is in the middle of an “expansion gap”.

They called for the “fastest possible tendering” and a decision to be made on “an economically efficient remuneration system for future offshore wind farms”.

Contract for difference (CfD)-style tendering — as used in the UK, France, Italy and Denmark — would work best and guarantee low and stable electricity costs, the groups argued.

The German government approved its hydrogen strategy in June, including plans to incentivise 5GW of green hydrogen output by 2020. And maritime and hydrographic agency BSH has provisionally chosen the first two sites for power-to-x, and could start tenders from 2021. Powe-to-x technology converts surplus power from electricity to another fuel to decarbonise sectors such as aviation or heating.

The groups further called on the government to create the necessary conditions for cross-border offshore projects, including choosing suitable sites and clarify investment framework to be used.

Iberdrola has stopped drilling work at the site off Brittany, France, after hydraulic fluid leaked from a jack-up vessel

Shell, BKK and Lyse will apply for licences in the Sørlige Nordsjø II and Utsira Nord Norwegian offshore wind auctions

EDP Renewables and Engie announced plans for the new project at an investment forum in Madrid, according to South Korean officials