Up to 5.9GW will be selected by Poland's energy regulator by the end of June 2021, before 5GW of further capacity will be competitively auctioned across two tenders in 2025 and 2027.

Under the proposals, developers would be eligible for government premium payments for 25 years, the Polish Wind Energy Association (PWEA) said. Other renewable projects are only eligible for 15-year contracts.

The increased volume of projects to be selected in the first phase is more in line with the combined capacity of already existing advanced projects, the PSEW added. Since the first draft was published, utility Polska Grupa Energetyczna (PGE) has secured environmental permits for two large wind farms, for example..

Poland currently has no legal minimum local content requirement, but developers would need to set and maintain a level on a project-by-project basis under the proposal, PWEA advised Windpower Monthly.

Under the new draft, investors would be responsible for building and financing the connection between offshore wind farms and the onshore grid. This was unclear in the original version, which had been published in January. It was updated in early July following a consultation.

Lawmakers are now due to consult again on the updated version and forward a revised draft to the Polish parliament on 14 July.

Michal Kurtyka, the country's climate minister, aims to have it passed by the end of the year.

The act follows Polish government and offshore wind representatives agreeing to work together to develop, sign and ultimately implement an offshore wind “sector deal” for the country, similar to the agreement  in place in the UK.

PWEA vice-president Kamila Tarnacka said: “More ambitious targets set for the first phase of development of offshore wind power in Poland and the announced sector deal with the Polish government are also strong signals for companies from the supply chain.

“The Polish wind industry is ready to increase its manufacturing capacity in order to meet the future demand for components and services for wind farms to be built in the Baltic Sea.”

The first up to 5.9GW of projects could be selected before 30 June 2021 under the revised draft.

These first Polish offshore wind farms would be likely to include the most advanced projects in the country’s pipeline, PWEA told Windpower Monthly, such as Polenergia and Equinor’s 1.2-1.4GW Baltyk II and III), PGE’s 2.5GW Baltica 2 and 3, and RWE’s 350MW FEW Baltic 2 for a total of 4.0-4.3GW (see below) 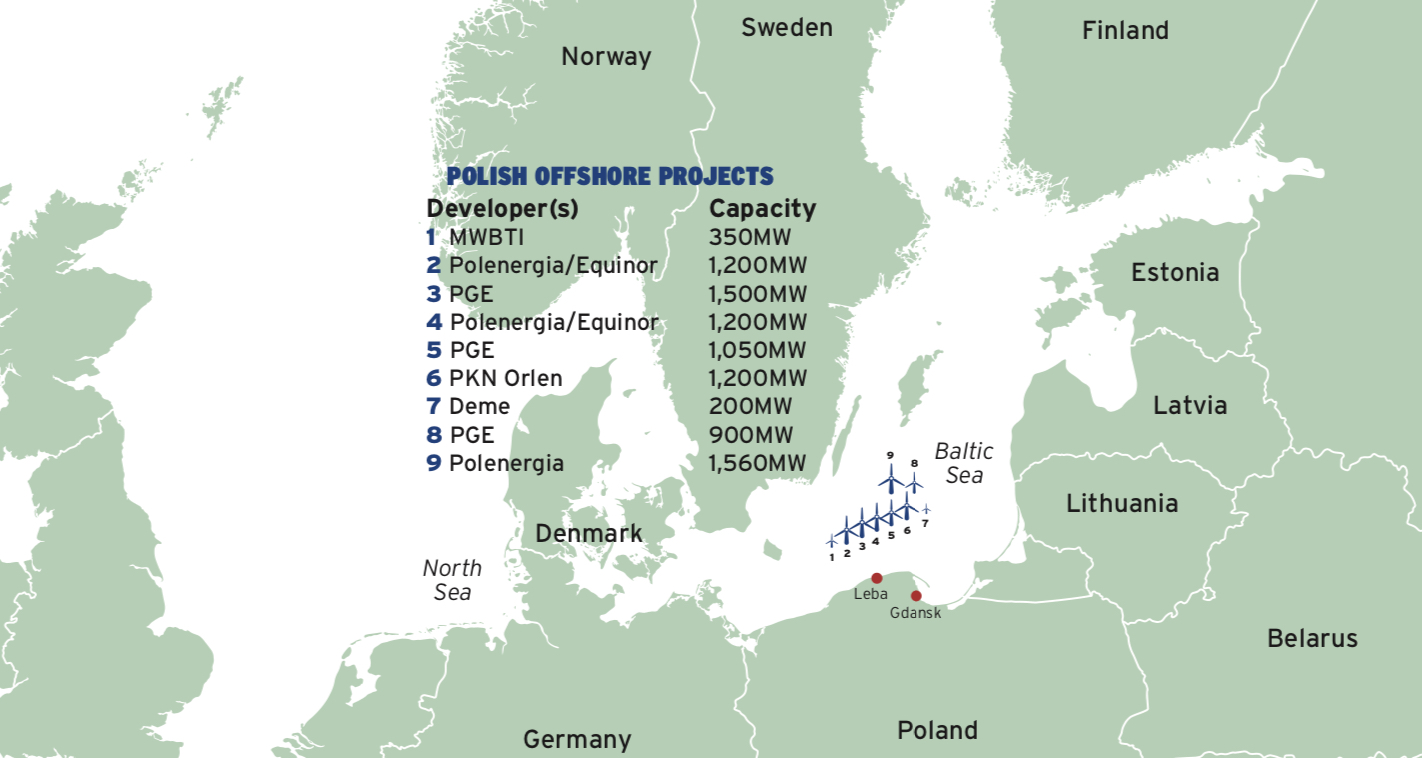 According to the proposed contracts, if the price obtained is lower than the one guaranteed by the state, project owners would be compensated for the deficit, while developers would refund the difference if the market price is higher than the agreed price.

The European Commission will need to approve support payments in this first phase as the contracts would not have been competitively tendered, PWEA pointed out..

Legislators argued that ending the selection process in June 2021 rather than at the end of 2022 would make a more precise distinction between the first and second phase of funding, and so better comply with EU regulations and guidelines.

In a second phase, two 2.5GW tenders would be held in 2025 and 2027, dropping the 500MW warmup auction contained in the original proposal.

An additional round for at least 500MW is now pencilled in for 2028, if the Polish council of ministers decide more capacity is needed.

For projects awarded in both phases, developers will have seven years to commission their wind farms after being granted support.