While there was an overall improvement in safety performance, last year saw a surge in the reported number of injuries relating to lost workdays.

Chair Tove Lunde, in her foreword to G+’s 2019 safety performance report, wrote: “We are therefore disappointed with our 2019 incident data, especially following the significant progress made the previous year.

“The difference is in part driven by a change in the metrics used to collate and analyse the data, but is nonetheless still a focus of discussion and attention, with members scrutinising reported incidents to establish if appropriate G+ guidance was in place and if being followed.”

G+'s data represents only Europe and the US. In total, G+ recorded 62 'lost work day incidents' for 2019 where a 'high-potential incident' resulted in a person having to miss at least one day due to injury. In 2018, this figure stood at just 39 incidents (see chart). 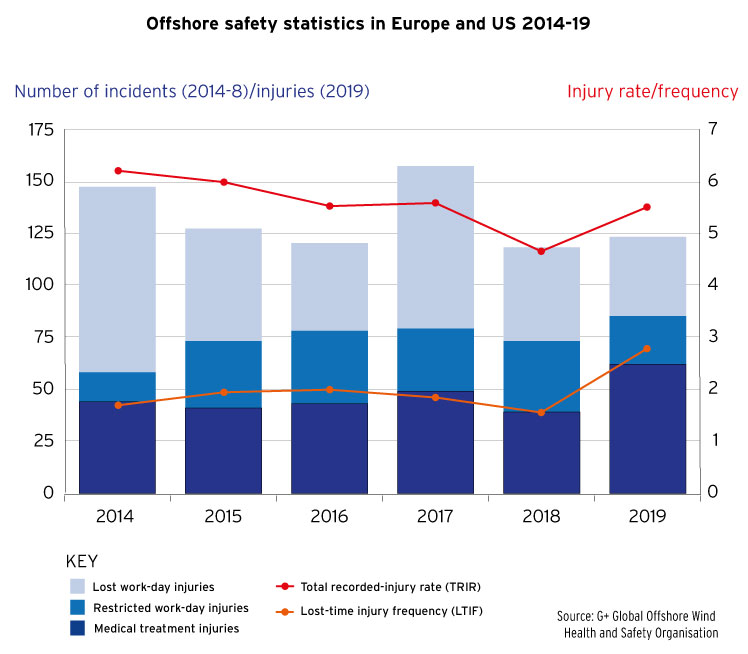 With the expansion of the offshore wind industry, the G+ has “recognised the growing potential risks,” the report states. It has since published its good practice guidelines and is working on a helicopter good practice guidance.

On the plus side, the number of injuries requiring medical treatment fell for a second year to 38, making it the lowest number on record. In 2019, the watchdog only reported 252 "high potential incidents" defined as an event that has the potential to cause a fatality or a life-changing injury. In 2016, that figure stood at 344 and is slightly lower than last year (256).

The report states that lifting operations and working at height are the two most potentially dangerous areas where injuries occur. In response, the G+ has focused its reporting efforts on areas where high potential incidents are more likely to occur, such as working at height, transfer by vessel and access/egress.

Overall, the working hours of G+ members have been on the decline in the past couple of years, from 26.8 million in 2017 to 22.4 million in 2019. This has been driven by the number of sites under construction, the report states.