Rystad Energy expects the two markets to reach parity as soon as next year, before offshore wind spending overtakes upstream offshore oil and gas Capex in 2022.

While oil and gas spending is expected to continue on a downwards trajectory through 2022, offshore wind spending is set to increase as countries strive to reach their 2030 renewable energy targets, the analysts believe.

The coronavirus (Covid-19) pandemic has caused the oil market to collapse, Rystad explained, with several final investment decisions postponed and lower investment being made.

Conversely, spending on European upstream offshore oil and gas — searching for potential oil and gas fields, drilling exploratory wells, and subsequently drilling and operating the wells — is due to shrink from more than €22 billion in 2019 to below €15 billion in 2022.

Rystad’s forecast refer to all investments made within a calendar year, including capital spending for projects due to be commissioned post-2022. 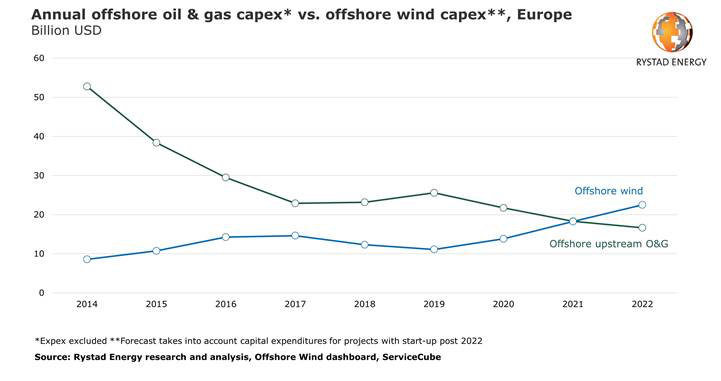 “Offshore wind development in Europe is expected to flourish in the coming years as countries strive to reach their ambitious 2030-targets – and large investments will be required,” says Alexander Flotre, Rystad Energy’s project manager for offshore wind.

“Commissioning activity is expected to increase towards 2025, and projects expected to be operational in 2023-2025 are already driving up capital expenditure in 2020. This trend will continue in the coming years.”

Rystad’s forecast echoes UK advisory firm EY’s suggestion that renewables could be seen as a safer investment bet than fossil fuels after the coronavirus pandemic.

The Norwegian analysts expect Europe to maintain its dominance in offshore wind over emerging markets and competitors such as China, south-east Asia and the US.

Most of this new capacity will come from projects that have already been approved. But if European countries are to reach their 2030 climate targets, further auction rounds will need to take place in the coming years, Rystad warned.

Established markets such as the UK, the Netherlands, Germany, Belgium and Denmark are expected to contributed to increase spending levels, while newcomers such as France and Poland will add to growth between 2023 and 2025

Rystad expects European capacity growth to accelerate in the near term, but previous analysis suggests that this will require ever-greater amounts of investment.

WindEurope noted that Capex per megawatt in projects reaching financial close increased last year - from €2.45 million/MW in 2018 to €4.28 million/MW in 2019. This was due to projects being built in new markets and facing more strenuous permitting challenges.