Equinor is projected to spend about $10 billion (or 57% of the combined $17.5 billion investment) on renewables in this period, including $6.5 billion in the next three years on offshore wind, Rystad Energy found.

The majority of Equinor’s greenfield capital spending in the next five years is expected to be on renewable energy, Rystad noted.

If the Norwegian energy giant’s investments were excluded, the combined outlay of the nine other oil and gas majors included in this outlook would decline over the next three years. 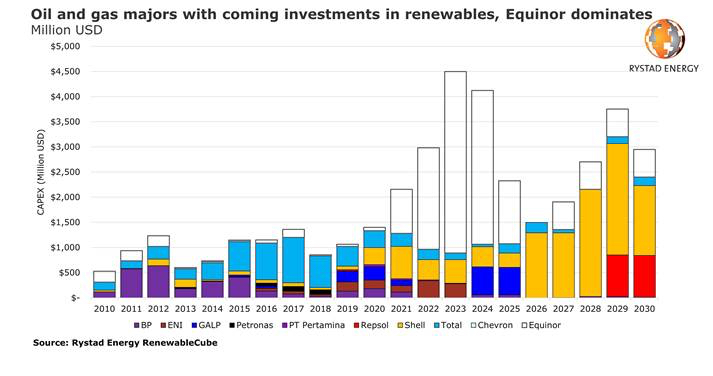 These ten fossil fuel majors are forecast to spend $166 billion on greenfield oil and gas projects in the next five years - more than nine times their expected outlay on renewables in the same period.

“Recent suggestions of ‘resilient green strategies’ or ‘business as usual’ simply do not carry much weight, with the exception of Equinor,” said Rystad Energy’s product manager for renewables, Gero Farruggio.

“Not until later in the decade do we see an increase in renewable spending from other companies.”

Portuguese company GALP, which is directing just under a quarter of its greenfield expenditure to renewables as it targets a 10GW renewables portfolio by 2030, is due to be the second highest spender on clean energy in the next five years.

Spending on renewables does not feature heavily in the spending plans of the other eight companies (BP, Eni, Petronas, PT Pertamina, Repsol, Shell, Total and Chevron) in the next five years.

The oil and gas majors’ planned wind and solar spending in the near-term is so low that, if needed because of the coronavirus pandemic, they could cut Capex by 20% across their overall investment portfolios without reducing renewables spending, Rystad claimed.

However, from 2026 through to 2030, Shell is expected to spend the most on renewables of the ten companies, while Repsol is due to ramp up its investments in wind and solar from 2029.

The analysts added that GALP and Shell look the most exposed to potential renewable spending cuts, but these companies are not expected to make significant investments in the near-term - not before 2024 for GALP and even later for Shell. By this time, oil prices will have recovered, creating a better environment for investment, Rystad noted.

The coronavirus pandemic could also prompt oil majors to increase capital spending on renewables, the analysts suggested. This claim echoes EY’s prediction that renewables may be a safer haven for investors than fossil fuels in the long-term.

Rystad’s Farrugio added: “The pandemic is creating a number of distressed sellers and reducing acquisition costs for assets and companies, thereby creating opportunities for Big Oil to accelerate its energy transition through acquisitions.

“And with exploration and production companies announcing deep spending cuts, we may yet see a ramp up in renewable investments as recent headlines suggest, facilitated by new mergers and acquisitions.”