A flooded gravel pit near the port of Bremerhaven in northern Germany provided the test site for the launch of the 1:10-scale Nezzy2 prototype. At full size, it will be more than 350 metres wide and 200 metres tall, but even at this scale, peaking at around 18 metres above the water level, it has the appearance of a “real thing”; and all striking details are in place, radically different from current industry practice.

These include the self-aligning downwind layout with two closely interspaced counter-rotating rotors; the droplet-shaped towers in V-formation with guy-cables interlinking the towers to provide the tower-foundation interfaces; and only the three bright yellow buoyancy elements of the semi-sub platform protruding from the surface.

The key difference from the 2017 concept launch is the use of three-bladed rotors (see 'Rotor alternatives').

Only three years ago, aerodyn-engineering president and Nezzy2 creator Sönke Siegfriedsen said he did not expect full-scale prototype implementation before 2024-25. He now thinks this timeline could be advanced towards early 2022 or even late next year.

EnBW is providing the necessary project funding and has been issued exclusive regional rights for deploying Nezzy2.

Klaus Ulrich Drechsel, team manager for civil engineering, wind and marine technology at EnBW, said the company started scanning the market for interesting floating turbine concepts three years ago. EnBW plans to invest more than €5 billion in renewables by 2025 and believes that floating is the future of offshore wind.

EnBW’s development activities in the floating offshore sector include in France via its subsidiary Valeco, and the US market, where it has joined Trident Winds’ 1GW project off the central Californian coast.

“The scan involved 50 floating systems, 20 of which were chosen via an evaluation matrix, and finally five technologies remained for further independent investigation and proof of concept.”

From EnBW’s point of view, Nezzy2’s integrated design — rather than the more conventional “bottom-fixed” turbine mounted on a floater solution — together with its self-aligning functionality and limited draught requirement, were the key benefits of aerodyn’s concept.

The mix of concrete and steel as the main materials was seen as a positive too, and another plus factor was that the design does not require large cranes for installation, potentially opening up new geographical markets.

“Because we are already looking beyond 15MW, another Nezzy2 benefit is that there are no constraints by limited dry-dock capacity,” said Drechsel. “The technology readiness is not as advanced as some already semi-commercial solutions, which means we have to speed up.” 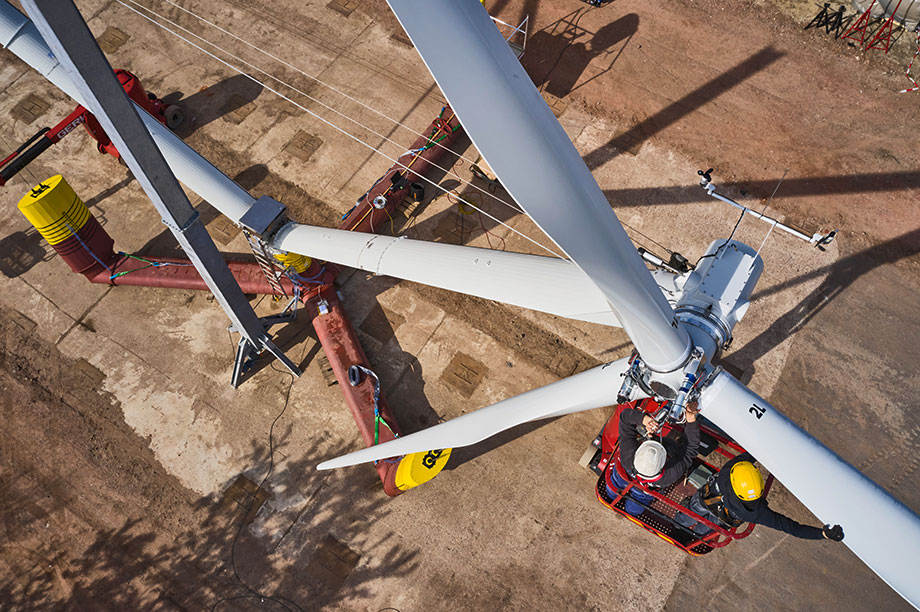 For practical reasons, the scaled prototype in Bremerhaven will be first tested in the pictured three-blade configuration, followed by the two-bladed rotor design of the original equipment design, requiring two different hub sets.

For the first full-scale prototype, aerodyn and EnBW have teamed up with a major turbine OEM (not named), which will supply the 7.5MW units with three-bladed rotors as standard.

“Both solutions are functionally comparable,” said Siegfriedsen. “But the two-bladed scaled design has already proven its worth in Japan by surviving three major typhoons in wind speeds up to 40m/s, corresponding to 120m/s for full-scale. The self-aligning rotor is then locked in a safe fully-pitched horizontal position.”

Weight is a key factor, he explained. Individual turbine head mass with a 155-metre two-blade rotor diameter will be in the 270-280-tonne range. Three-bladed equivalents would be much heavier, and this is a mass multiplier that affects all other turbine and foundation components.

Another consideration with the full-system is that two-bladed Nezzy2 units are easier to install with the blades in horizontal position and already fully mounted. However, the installation team has successfully practiced an in-house method for mounting the three-bladed units through lowering the towers towards horizontal position, also eliminating large crane deployment.

The accelerated pathway towards a full-scale prototype has been made possible by several successful testing and validation milestones for the original SCDnezzy design. “A two-bladed downwind 6MW SCD 6.0 offshore prototype was installed in China in 2014 and has been building a track record ever since,” says Siegfriedsen.

Clocking up floating experience for Nezzy started with wave-basin testing a 1:36-scale model with a single rotor in Cork, Ireland during 2017. This involved surviving simulating scaled wave heights up to 30 metres, extreme conditions not uncommon in the Atlantic.

“In the same year, we bench-tested an extensively modified 3MW two-bladed SCD 3.0 (upwind) nacelle at TWTH Aachen Technical University, before shipping it to Japan for a demonstration project involving an Ideol floater,” he continues. "These tests triggered turbine modifications essential to withstand the system accelerations resulting from floater movements up to a ten-degree maximum inclination, which included fitting different bearings in the gearbox, blade and yaw systems, and an adapted lubrication and electrical system.

“Calculations further showed that the required tower mass is about three times higher than an equivalent tower for fixed-bottom application,” Siegfriedsen says.

“Testing and technology validation of our 1:10-scale Nezzy with a single-rotor at the Japanese east-coast in Kure near Hiroshima in early 2018 proved another great learning experience.”

Give and take on power yields

The difference in output between the two versions is relatively small, all things considered, according to Siegfriedsen: “The annual energy production (AEP) of equivalent size two-bladed rotors is 3-3.5% less than a three-bladed rotor.”

Nezzy2 looks at it holistically because of the complex system dynamics under which all forces interact three-dimensionally. The substructure arms, as well as the towers are impacted by both waves and wind. The counter-rotating rotors each have a specific rotational direction for keeping the guy wires continuously under tension. The arrangement further minimises tip-speed differences during a blade’s passage, while the close interspacing according to computational fluid dynamics (CFD) simulations raises AEP by about 2%.

The aerodyn team deployed an uncomplicated in-house-built barge for mapping water depths across the pit aimed at allocating even depth values for the six anchors. The prototype has a Nezzy-specific single-point mooring system with six drag anchors, each lowered at about 10-metre water depths — corresponding to 100 metres at full scale.

“The same vessel is used for installing anchors and turbine visits,” says Siegfriedsen. “The prototype has around 50 sensors, four of which measure forces in the mooring system. This crucial system has three key functions: accommodating the anchor lines; transmitting the power produced from a rotating to a stationary part; and transmitting sensor signals, which are transmitted to shore via separate cables from the power generation.”

The lack of waves and sea current inside the gravel pit allows the research team to study Nezzy2 wind tracking “in isolation”, a process planned to take roughly two months. This might be expanded to four months, depending on regulatory approval for testing the prototype under Baltic Sea wave and wind conditions. This could ideally take effect this summer for a ten-week period and would be solely aimed at taking wind measurements, while the power will be dissipated. After testing completion, the scaled prototype will be dismantled. Testing of a 15MW full-scale model is scheduled off the coast of China from late 2021 at the earliest and with the other - not to be named - industrial partner supplying the nacelles. 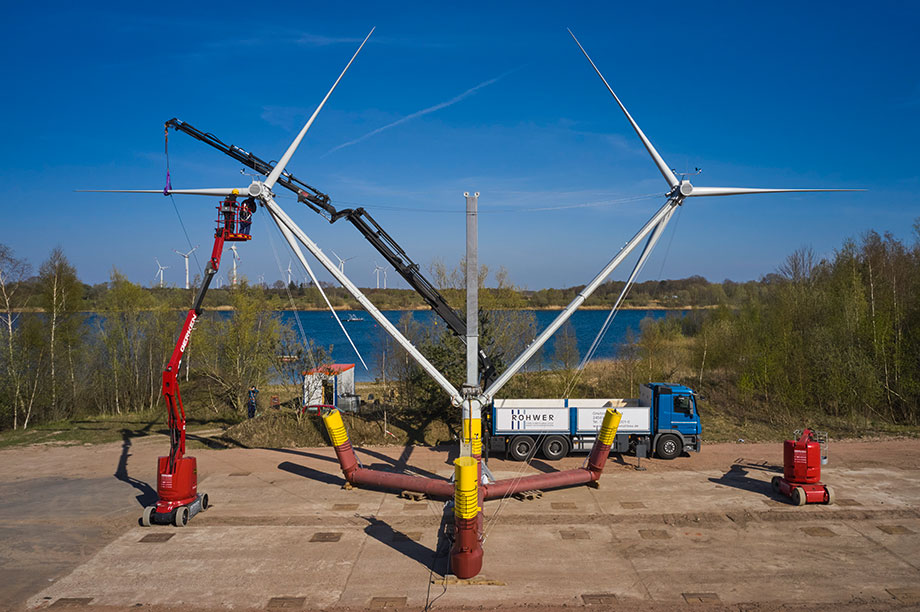 The main advantage is that the new designs are much easier and faster to build by local firms specialising in concrete structures, taking one to two days to complete a unit.

“An additional benefit is eliminating the need for sealed compartments that are otherwise essential during floating from port to wind-farm sites. We further plan to optimise the power transmission system via a new, patent-pending, brushless device, and by making power cables lighter, with more dynamic flexibility. These cables are not commercially available yet, which will require a dedicated market pull”, he concludes.