The manufacturer claims an increase in AEP of more than 25% over its its SG 11-200 DD predecessor.

The specific power rating at 14MW output level is 362W/m2, set against 350W/m2 for the SG 11-200 DD, but a maximum output of 15MW can be reached with the power boost feature engaged under specific operating conditions.

The only current reference is the direct-drive GE Haliade-X 12MW featuring a 220-metre rotor diameter (316W/m2), which was launched in March 2018 with a 2019 prototype and series production envisaged to start next year.

The manufacturer has already secured preferred supplier status for Germany’s 900MW Borkum Riffgrund 3 and the 242MW Gode Wind 3 projects for the longer-bladed model, together with orders of around 140 units for the SG 11-193 Flex DD in the Netherlands.

Both variants share the same nacelles, while the B94 inner blades (currently being tested at the new Aalborg test rig in Denmark) has been stretched to B97 specification.

The platform today encompasses more than 1,000 operational turbines, with another thousand in confirmed orders. A further 2,500 geared turbines, ranging from 450kW to 4MW have been installed since 1991.

“During the process of setting out the main SG 14-222 DD specifications, we asked ourselves how far it would be wise to go in stretching rotor size and rating”, says SGRE's offshore wind CEO, Andreas Nauen.

“This had to be weighed against a tight time-to-market goal in 2024, including prototype installation next year. Meeting those targets required a strict design freeze.

"We therefore decided on an incremental evolution of proven technology, rather than a new platform concept that would require a different generator, blade design and main bearing solution, and a lot more time and effort,” he says.

That decision drove the choice on the key components and systems could be re-applied to the 14MW turbine, and which "costs-outs" were possible.

Nauen adds that offshore wind is a LCoE-driven market characterised by falling prices. On that criteria, the new SG14-222 flagship is a clear winner over the 11-200, he says.

“This is confirmed by the positive client feedback. They also express a lot of confidence in our direct-drive technology, which now achieves up to 98% availability in the harsh marine environment. To remain the offshore market leader, and despite the huge pressure on LCoE, we have to continuously minimise commercial, supply-chain and technical risk for our clients.”

SG 14-222 nacelles can still be built in the main German plant in Cuxhaven. There is only limiting factor, now being addressed. SGRE is also building two new blade production halls in Aalborg, Denmark, to accommodate the B108 blades, 27 metres longer than the current 81.5-metre units, and to prepare these plants for future generations of offshore blades.

A compromise had to be made regarding optimal blade chord width, otherwise it would have been too big for the current plants.

“Our future global manufacturing network includes a new combined plant for nacelles and blades in France.

"The nacelle assembly facility in Taiwan will be expanded as well to form a regional offshore wind nacelle industrial hub together with local suppliers. Specialisation in specific plants is a further option under consideration,” Nauen says. 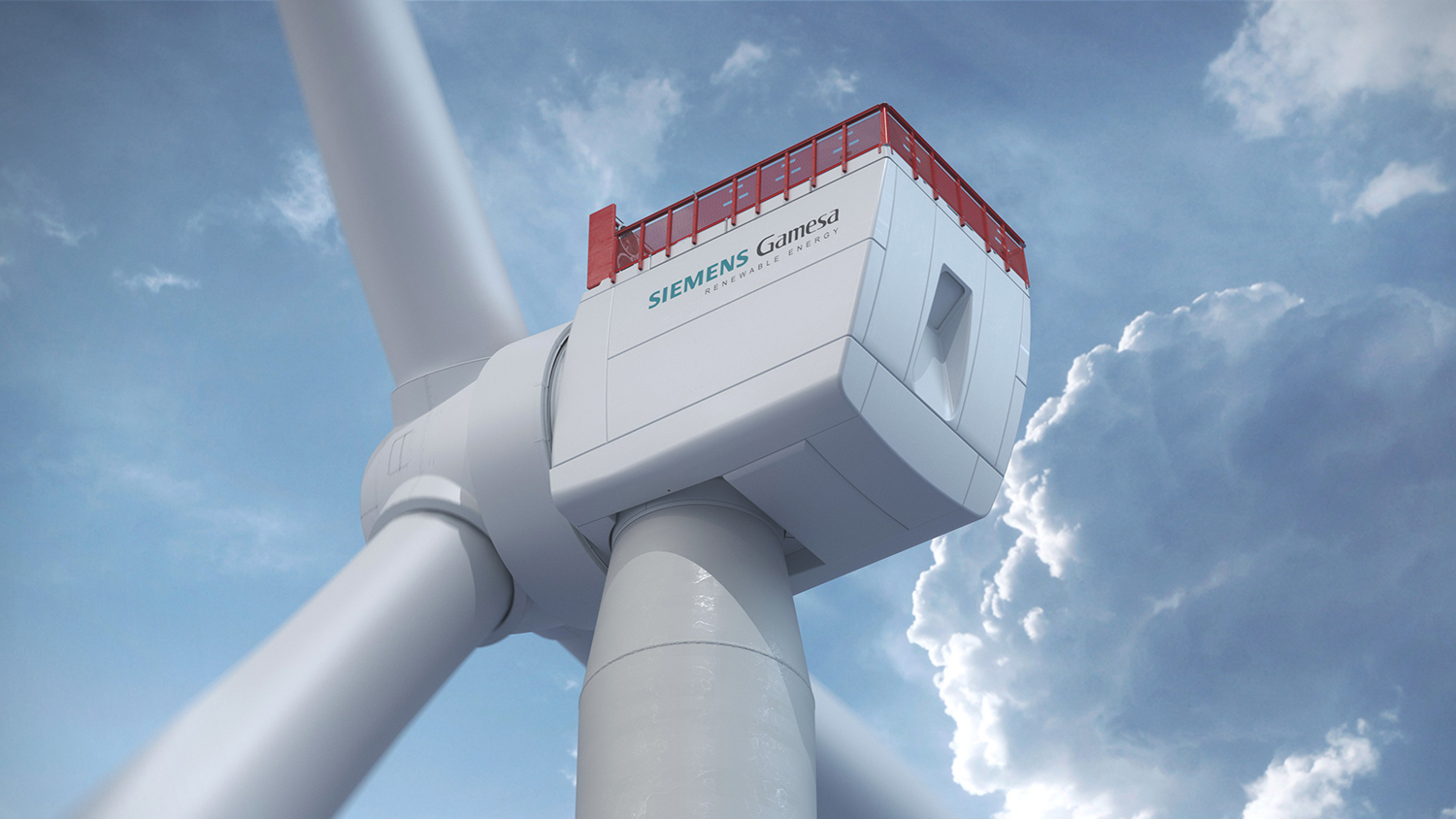 From the pictures, there is little to differentiate the 11MW and 14MW nacelles. "We retained the nacelle back end, but the segmented outer rotor generator diameter has increased by around one metre," says senior product manager Peter Esmann.

"The increased circumference of the outer rotor ring means we could put more magnets inside to compensate for the reduced rotor/generator revolutions of the 222-metre rotor. It also offers enhanced heat dissipation performance — essential because of the higher rating in combination with reduced rotor-generator rotational speed."

At around 500 tonnes, the 14MW's nacelle mass compares favourably with the 600 tonnes quoted in the prototype specs of GE's 12MW Haliade-X.

A key overall design focus was on driving down loads throughout the structure, says Esmann together with head of structural blade design Jeppe Funk Kirkegaard.

"Because it's a fully integrated design, multiple enhancements could be achieved through a combination of turbine control, tooling and optimising structural interactions," they explain.

"This involved many small incremental improvements, Reducing blade loads, for example, allows you to optimise blade mass, which has additional mass savings across the entire structure."

Continuous feedback from the turbine fleet fed into the design. In hindsight, the SG 10-193 DD proved to be a rather conservative design, but it offered additional scaling reserves for successor models.

The hub's outer dimensions could be retained, but reinforced by "adding mass in a smart way", says Kirkegaard.

"That allowed smaller-diameter pitch bearings and blades with a reduced root size. All additional savings help because the highest blade mass share is in the inner-third section."

Another focus area, first introduced with the SG-10-193, aims at optimal AEP at the project level instead of getting most energy out of single turbines, which allows substantially reduced loads at the individual unit level.

The main benefit for the harsh offshore environment is that it eliminates the erosion-prone leading edge-seam and structurally critical trailing-edge.

"Each new IB-generation showed it was possible to increase manufacturing efficiency — measured in kilos per square metre of blades processed on the factory floor," says Kirkegaard.

IB-technology is well-suited to SGRE's current in-house production set-up with still relatively modest numbers, he says. But it could be less suitable for outsourced high-volume production and external built-to-print arrangements for smaller and less advanced commodity blades.

SGRE considers the 14MW+ rating with a 222-metre rotor the optimal configuration within current technology and logistical restraints, and that its direct-drive concept is both versatile and scalable.

However, the future of offshore wind development is hard to predict, which is clear from the huge steps that have been made in the past few years. The debate on how just how large and powerful offshore turbines could, or should, become, continues.

The key for Esmann and Kirkegaard is to do something that makes technical and commercial sense, and does not turn out to be a white elephant. Trying to anticipate what might happen six years ahead before starting out on a new product development while finding the right spot in the market, is a complicating factor.

"From a purely technical perspective, there is no issue with a 16-17MW turbine with a rotor diameter to match," they say. "But there must be a sound business case, including the careful weighing of all risks."