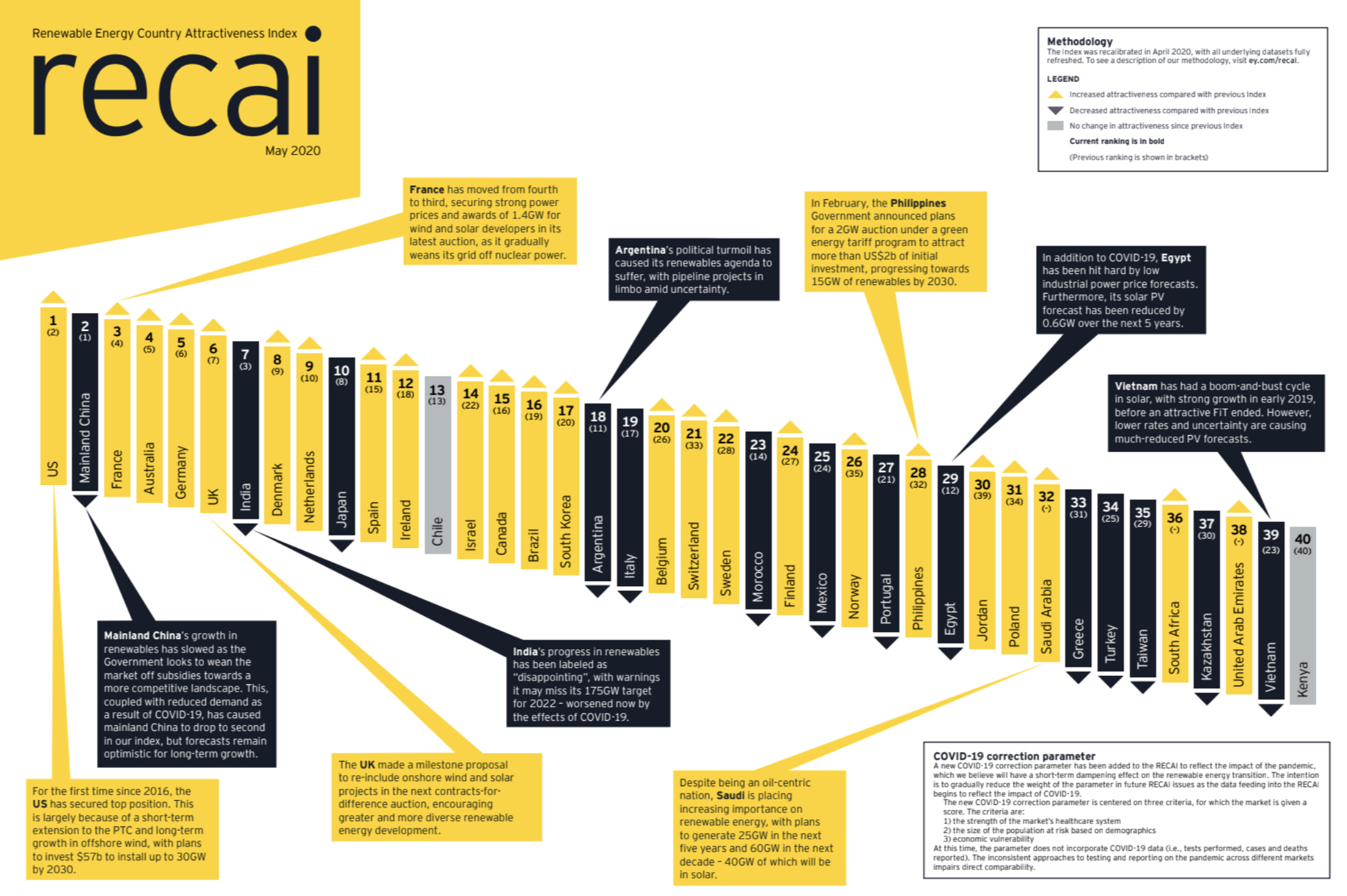 For the first time in its twice-yearly rankings, EY factored in the strength of markets’ healthcare systems, the size of their population that is at-risk based on demographics, and their economic vulnerability - key indicators of a market’s resilience against the coronavirus.

EY expects the global renewables sector to recover after a short-term slowdown caused by the Covid-19 pandemic, but warns it will be uneven between markets.

The US leapfrogged mainland China into the top spot for the first time since 2016.

This was due to the short-term extension to its production tax credit (PTC) support scheme and the prospect of long-term growth in its offshore wind sector.

EY anticipates $57 billion will be invested to develop up to 30GW of offshore wind in the US by 2030.

Meanwhile, China plans to end subsidies for renewables at the end of the year but is discussing an extension in response to the pandemic.

Despite trading places, the US and China remain ahead of France, Australia, Germany, and the UK in terms of attracting investors in renewable energy.

France moves from fourth in the last ranking in November to third, due to strong power prices and capacity awards in wind and solar tenders. It is also gradually weaning off nuclear power, EY noted.

The UK's reinstatement of onshore wind to its tender scheme moved it up to sixth from seventh.

It overtook India — demoted from third six months ago — as its energy transition stutters.

India is set to miss its ambitious target of 175GW of operational renewables by 2022 — including 60GW of wind — EY stated.

Last week, the Global Wind Energy Council warned that India would likely fall 10GW short of its target for wind, due to insufficient grid capacity and availability of land, as well as capped tariffs deterring developers from competing for capacity in auctions.

Elsewhere, Japan was fell two places to tenth in the ranking after declining to increase its 2030 emissions reduction target.

Its demotion comes despite the country making progress in starting its offshore wind sector, with the first final investment decision made on a project, and participants gearing up for the country’s first offshore tender, which is expected in the second half of the year.

Spain leaped from 15th to 11th, buoyed by the coalition government setting out aggressive plans to increase wind and solar.

Ireland was promoted to 12th from 18th after its government announced details of a new renewable electricity support scheme, which includes plans for a series of tenders, and amid growing interest in the offshore wind sector.

Argentina fell from 11th to 18th amid political turmoil, which has derailed the country’s renewables agenda and kept pipeline projects in limbo.

While EY warned of a slowdown amid the coronavirus pandemic, the advisor suggested renewables could be seen as a safer investment bet than fossil fuels in the long-term.

In the introduction to the latest report, Recai chief editor Ben Warren wrote: “The need, after the pandemic, to ensure greater economic and social resilience will work in favour of distributed power sources, such as wind and solar, and the applications offered by battery storage.

“Large companies will be keen to demonstrate that they are responsible corporate citizens, encouraging them to source clean energy.”

EY noted that institutional investors are increasingly demanding businesses to not just deliver a financial return but also demonstrate how they make a positive contribution to society.

There is a trend for investors to allocate more capital to renewable energy infrastructure to hedge their exposure to climate change, the advisors noted.