The 15MW "paper" giant features a record 240-metre rotor and comes with a monopile-type fixed-bottom support structure and a floating solution in development, according to NREL’s post-doc researcher and main turbine designer Evan Gaertner and senior research engineer Garrett Barter.

Additional values include a hub height of 150 metres and a design focus on generic IEC IB offshore locations with mean speeds of around 8.65m/s, typical along the US east coast. Under these conditions, the corresponding significant wave height is around 1.4 metres with a peak spectral period of 7.9s. The monopile substructure is designed for 30-metre water depths. However, this article focuses on the turbine rather than its foundation.

"To be relevant today and in the coming years, our 15MW-RWT should leap ahead of current-generation commercially developed turbines, but it cannot leap so far that aggressive technology innovations are required," Gaertner and Barter explain. "This means the power rating has to be above 10MW but below 20MW, and it continues along the same growth trend of GE’s 12MW Haliade-X, using a similar drivetrain configuration." 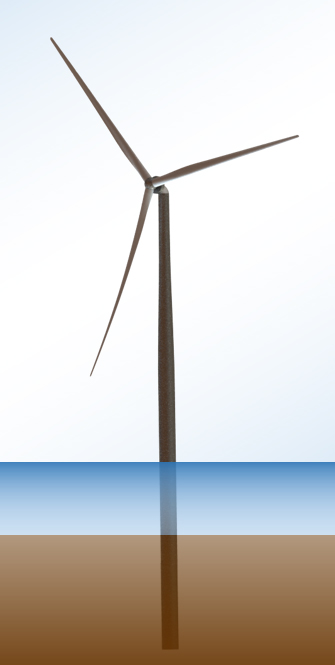 The blade’s structural configuration is fairly traditional, with two carbon-reinforced load-carrying spars. The composite contains a modest 3.7% carbon share on a mass basis. The design rated tip speed is 95m/s.

Gaertner outlines some other basic assumptions on the blade topology, including 4-degree coning and 4-metre pre-curving. "The 65-tonne blade mass, 10 tonnes more than the Haliade-X, resulted from a series of optimisation studies rather than a scaling exercise from an existing design," he says.

"However, our optimisation codes are relatively low fidelity and focused on spar-cap and trailing-edge reinforcement designs. It’s therefore possible that blade root build-up is either under- or oversized, with significant impacts either way on blade mass. The current conservative blade design is a starting point offering lots of opportunities to allow an increase in blade length and/or a reduction in blade mass."

Continuing the same specific power reduction trend of the 12MW Haliade-X would have resulted in a rotor diameter exceeding 250 metres, which the team considered to be a little too aggressive following consultation with industry, Gaertner explains. A rumoured Haliade-X 14MW uprate would, however, raise specific power to 368W/m2, putting the various figures "all in the same ballpark", he adds.

The 15MW concept design deploys collective blade pitch instead of load-based IPC (individual pitch control), as is already incorporated in some very large turbines for onshore and offshore, whereby individual blade angles are adjusted continuously as a function of ongoing blade-root load measurement.

"This advanced [IPC] solution was discussed, but again we opted for a conservative design that would serve as a good baseline to examine the cost-benefit trade-offs of new technologies," Gaertner says. "We also offer the 15MW conceptual design in multiple modelling platforms, with two new controllers based upon a similar exploration and optimising philosophy. One major innovation from our perspective is the Rosco controller meant to offer automatic tuning of controller gains and settings based on physical geometry and mass properties. This makes it well suited to exploring new designs or continuous improvements where controller is updated with each new design iteration."

The NREL opted for a direct-drive configuration with an outer-rotor generator, similar to Siemens Gamesa’s 6-11MW offshore portfolio, developed in-house. 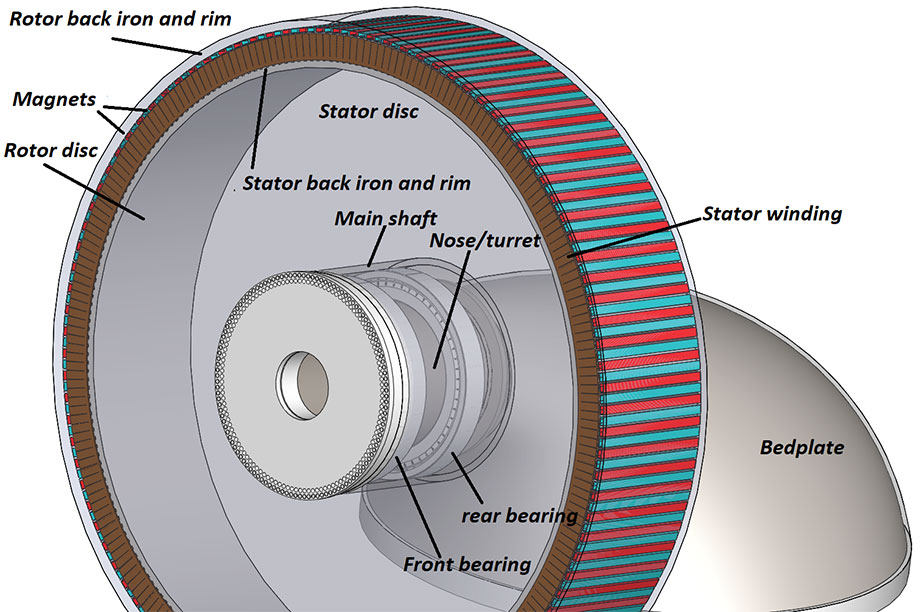 "This will serve as a baseline for further technology exploration. For outer-rotor multi-pole designs in particular, the increased rotor peripheral [outer] area offers multiple advantages. It results in a smaller overall generator volume, lower mass and cost, and reduced short-circuit current compared with conventional inner-rotor designs."

The outer-rotor layout further facilitates a simple rugged structure allowing easy assembly, and it enables short-end-windings and optimal heat transfer between the stator’s windings and teeth. The main dimensions of the huge actively air-cooled generator include an air gap with a diameter of 10.35 metres and a 2.17-metre core length, with a 96.5% calculated rated efficiency. Because the generator does not operate at sensitive temperatures, it only requires neodymium (NdFeB) magnets rather than the supply-chain critical rare earth dysprosium, she says.

Another distinct choice was for a compact state-of-the-art two-bearing rotor-generator support solution with a hollow stationary shaft and a rotating shaft for the turbine-rotor and generator-rotor attachment, Gaertner and Sethuraman explain. "Again the goal was to be somewhat conservative and pick one considering our limited resources. It is also essential to note that this turbine is a concept development that only exists in models. It is not intended to actually be built and operated."

The upwind bearing facing the rotor is a double-row taper-roller type for handling high radial loads, whereas the downwind bearing is a spherical roller type equipped to carry the axial loads, Sethuraman adds. Both bearings support the mass and aerodynamic loads from the turbine rotor, main shaft and generator-rotor mass. As a similar approach was used in an earlier IEA Wind 10MW design, analytical formulations are readily available.

It is sometimes argued that a large-scale direct drive unit will inevitably lead to a very heavy generator, with a significant negative impact on nacelle mass. The specifications for the 15MW RWT quote 372 tonnes for the stator plus rotor, and around 400 tonnes total generator mass, including bearings and integrated shaft.

A 1,017t head mass (72.6t/MW) already compares well to the 12MW Haliade-X with an estimated 875 tonnes (72.9t/MW). Considering, for instance, the current simplified main carrier casting shape, there appears potential to further reduce mass in the future as technology advances in specific areas.

Gaertner confirms this is the plan. "How far that can go depends on how technology develops. A traditional synchronous permanent magnet radial flux generator, including our design, does not scale particularly well to large machine ratings, and we expect that new generator technologies could therefore offer particular benefits."

Finally, asked whether they have any further scaling options in mind, Gaertner and Barter conclude: "For a reference turbine, this design is intended to be relevant until the industry firmly advances beyond the 15MW point, likely with various optimised rotor sizes for specific operating conditions. Offshore turbines have been growing quickly, but hopefully we have at least five to ten years until that happens."

The IEA Wind 15MW reference wind turbine (RWT) was developed by the NREL, with funding from the US Department of Wind Energy Technologies Office (WETO). It was conducted in collaboration with the University of Maine and the Danish Technical University (DTU) through IEA’s Wind Technology Collaboration Programme (IEA Wind) Task 37 on Systems Engineering in Wind Energy.

This latest RWT is available alongside two other open-source RWTs recently completed by the IEA Task 37 effort: a 3.35MW land-based design and a 10MW offshore concept.

Reference wind turbines (RWTs) have served the wind community since the early 2000s, with the most widely used turbine within universities and research institutes perhaps being the NREL 5MW (126-metre rotor) of 2009. Traditionally, RWTs have been realistic but not fully optimised designs that can be updated and improved upon.