Wind power, boosted by capacity increases in key markets such as China and the US, is expected to increase the most in absolute generation terms among all renewables, according to International Energy Agency (IEA) projections.

Renewables’ increased production levels and priority access to grids will increasingly squeeze out incumbent fossil fuel sources of generation as lockdowns drive a shift to low-carbon electricity, the IEA believes.

Reduced economic activity means energy and electricity demand are set to fall 6% and 5%, respectively, this year, while carbon emissions are expected to drop by 8%.

The projected decline in energy demand would be seven times steeper than the one that followed the 2008 economic crash.

The decline in electricity demand is due to be the largest drop since the Great Depression in the 1930s, while carbon emissions are set to fall to their lowest levels since 2010.

IEA executive director Fatih Birol warned a rebound in emissions is likely as economic activity is restored, and called on governments to put clean energy technologies at the centre of their recovery stimulus packages.

Describing the pandemic as “a historic shock to the entire energy world”, Birol added: “It is still too early to determine the longer-term impacts, but the energy industry that emerges from this crisis will be significantly different from the one that came before.” 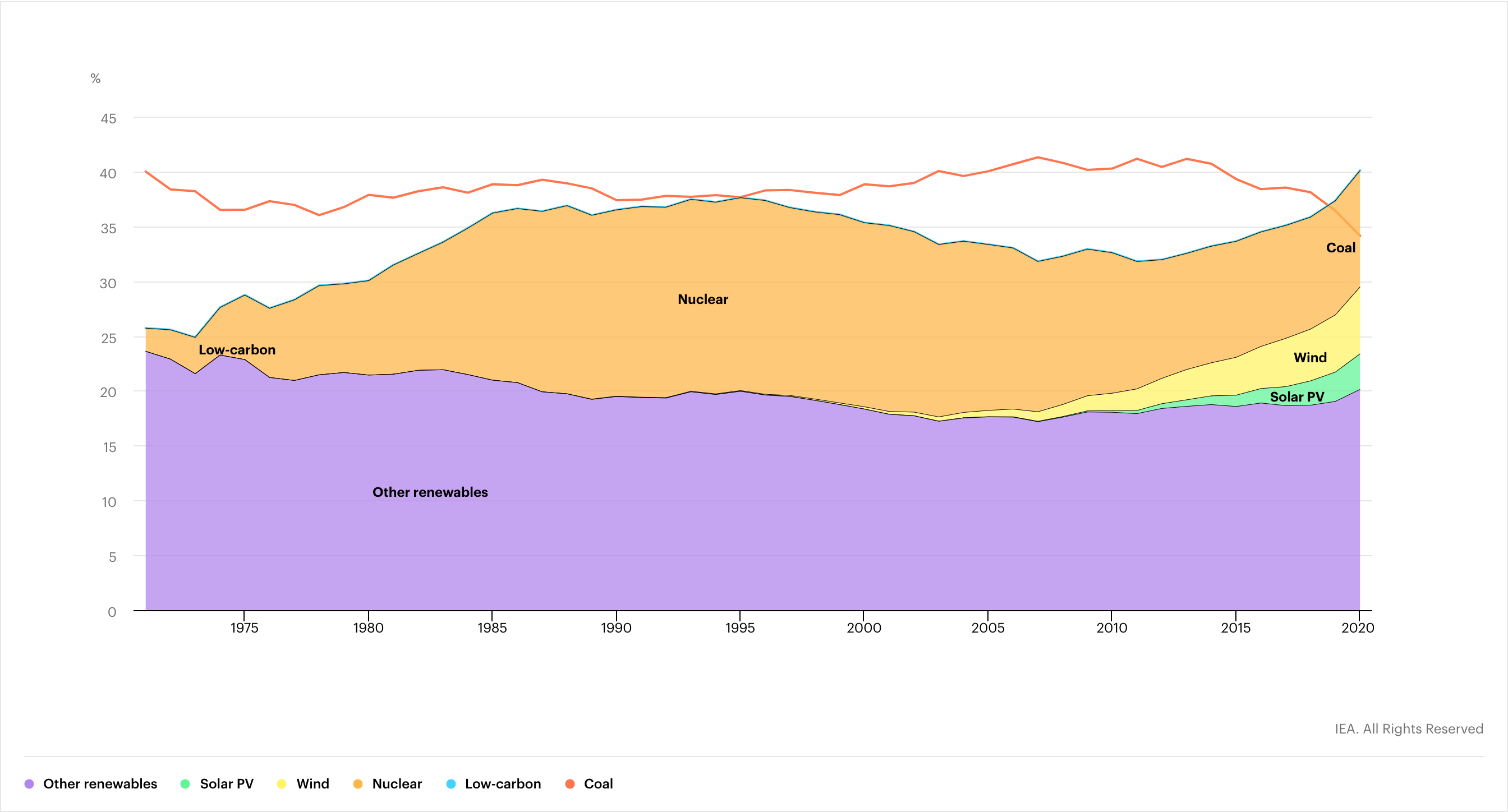 Low-carbon sources are expected to reach 40% of global electricity generation this year — six percentage points ahead of coal, in the IEA’s Global Energy Review.

While coal, oil and natural gas’ shares of generation slump, the IEA forecasts renewables will be the only energy sources to increase their share of generation this year.

For example, wind is projected to account for 6% of total electricity generation this year — up one percentage point from 2019.

Wind and solar PV’s increased shares are largely due to their priority access to grids and their low operating costs and new projects being completed in 2019 and early 2020, the agency explained.

Renewable generation is expected to increase 5% from 2019 — but this rise will still be smaller than previous years, the IEA noted. 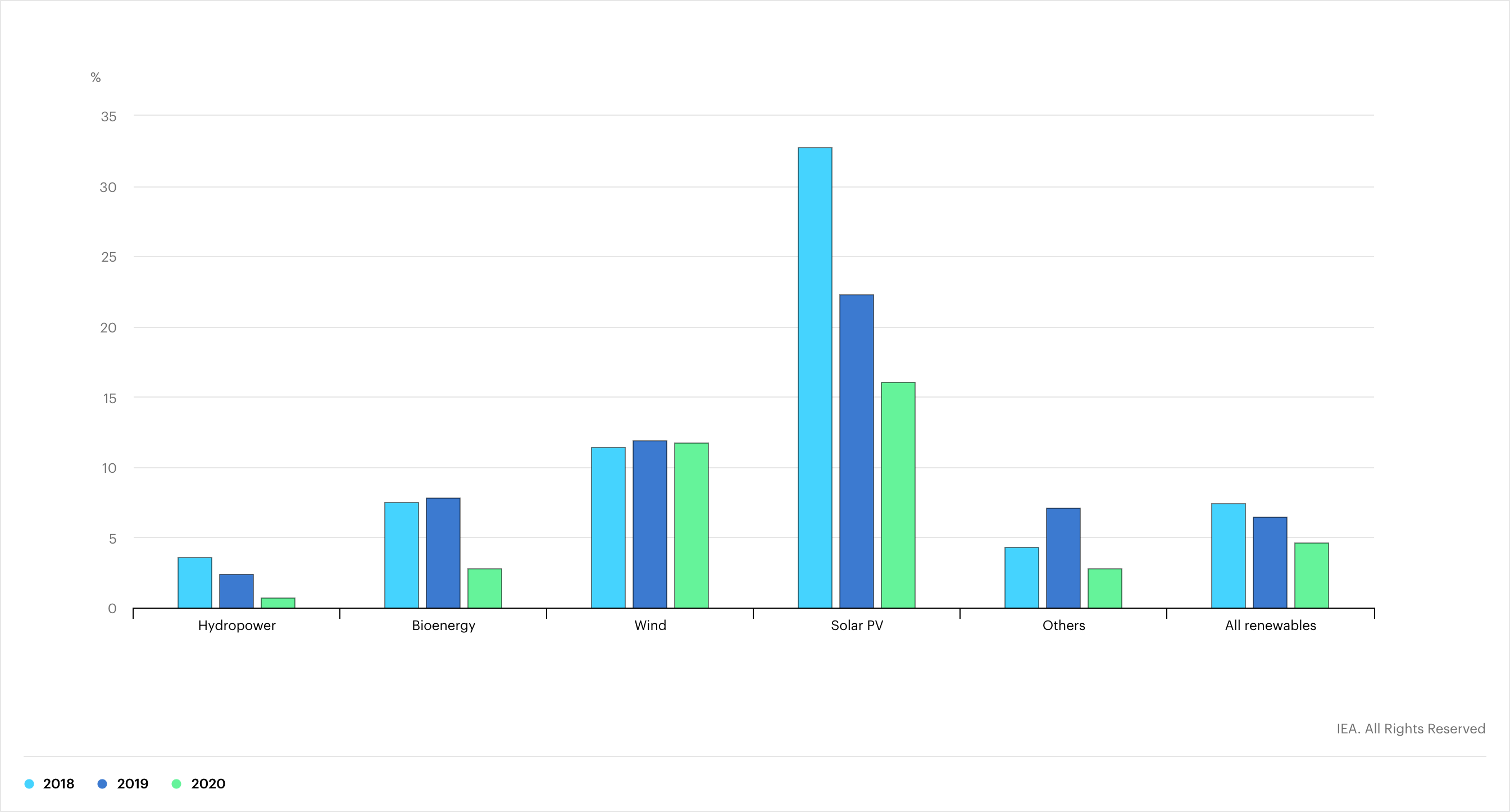 Wind and solar PV are due to account for the bulk of this growth in electricity generation, increasing 12% and 16% respectively.

While wind’s growth rate is the same as in 2019, solar PV’s increase marks a six-percentage-point decrease from last year’s growth.

The IEA noted that wind will be boosted by favourable resources in the first quarter of the year and the expectation of strong capacity additions in 2020 due to developers aiming to complete projects to meet policy deadlines.

Clean energy sources’ share of global energy and electricity use rose in the first quarter of 2020, aided by favourable weather conditions, and more than 100GW of solar PV and about 60GW of wind capacity being connected to the grid in 2019.

This helped to boost renewable energy use by 1.5% in Q1 2020, and renewable electricity production by 3% in the first three months of the year.

Once lockdown measures were put in place, electricity demand fell, while levels of wind and solar PV held steady, the IEA noted.

The 6% decline in global energy demand expected this year is equivalent to losing the entire energy demand of India, the world’s third largest energy consumer, the agency added.

This decline will be especially prevalent in advanced economies such as the US and the European Union, where the IEA projects drops of 9% and 11% respectively.

Lockdowns in response to the pandemic have also caused significant declines in overall electricity demand, with consumption levels and patterns on weekdays looking like those of a pre-crisis Sunday, the IEA stated.

However, these declines are uneven, the IEA explained.

As clean energy sources squeeze out fossil-fuels, all-time-high hourly shares of variable renewables in electricity demand have been recorded in several regions — including Belgium, Italy, Germany, Hungary and eastern parts of the US — during lockdown.

The IEA added that electricity systems have been able to deal with increasing shares of variable renewables over the past few months because most markets have already experienced higher levels in summer months when solar PV penetration increases significantly.

“This is a historic shock to the entire energy world,” said IEA executive director Fatih Birol.

“Amid today’s unparalleled health and economic crises, the plunge in demand for nearly all major fuels is staggering, especially for coal, oil and gas.

“Only renewables are holding up during the previously unheard-of slump in electricity use.”