Those two-thirds live in locations comprising 71% of global gross domestic product (GDP) and 85% of total energy generation, according to BloombergNEF (BNEF).

More powerful and efficient turbines and economies of scale achieved through building larger projects have helped drive down the costs of both onshore and offshore wind and will continue to do so, the analysts explained.

The levelised cost of energy (LCOE) for onshore wind projects has fallen 60% since the second half of 2009.

This latest benchmark is itself a 9% fall from projects reaching financial close in the second half of 2019. 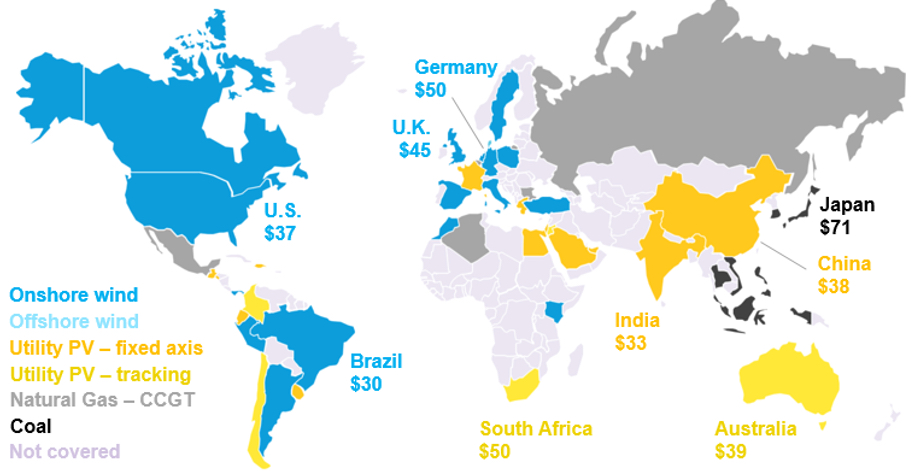 Onshore wind and solar PV are the cheapest source of electricity generation for most of the world's population (pic: BNEF)

Tifenn Brandily, lead author of the report, said that the cost reductions can partly be explained by manufacturers “getting better at extracting renewable resources”.

“But our analysis also suggests that since 2016, auctions are forcing developers to realise cost savings by scaling up project size and portfolios,” he added.

“Larger scale enables them to slash balance-of-plant, operations, and maintenance expenses – and have a stronger negotiating position when ordering equipment.”

The sharp drop in LCOE for onshore wind in the last six months comes as the average power rating of turbines increased from just over 3MW in H1 2019 to around 4.1MW this year, with hub heights rising from about 93 metres to just under 100 metres.

The output of the average onshore wind farm has also increased, doubling in capacity from 32MW in 2016 to about 73MW today, according to BNEF.

Additionally, the lowest prices globally are found in Brazil, where “wind resources are ample” best-in-class projects cost about $24/MWh.

The economic crisis of 2016 onwards prompted wary investors to drive up the cost of capital by up to 13% for wind projects, but lending rates have now fallen back to pre-crisis levels, BNEF stated.

Behind Brazil, the next cheapest projects can be found in the US, India, and Spain, where best-in-class onshore wind farms come in at $26/MWh, $29/MWh, and $29/MWh respectively — excluding subsidies.

Brandily sees even more powerful turbines and increasing hub heights continuing to lower prices by 2030, combining to deliver a 15-40% drop in LCOE compared to today — though the extent of these cost reductions will vary between markets.

This could mean that before 2030, the cheapest onshore wind farms could push below $20/MWh. 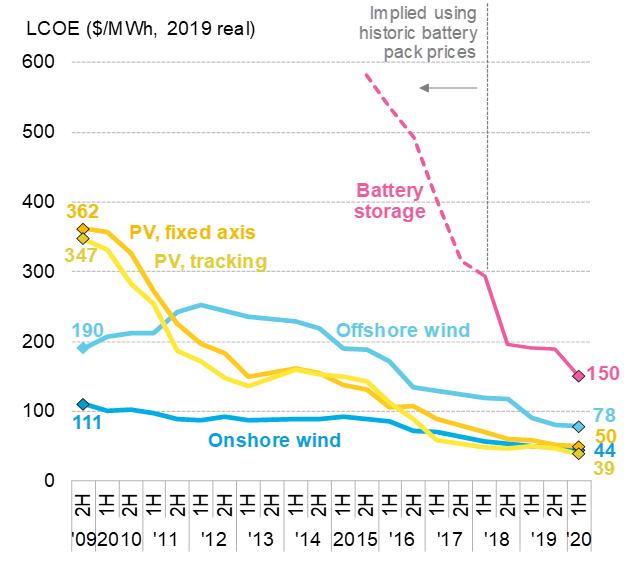 Onshore wind and offshore wind projects reaching financial close in the first half of 2020 averaged $44/MWh and $78/MWh, respectively

The increasing scale of individual turbines and projects as well as and lower financing costs have also helped drive down offshore wind costs, Brandily explained.

Some newly financed offshore wind projects are due to use 12MW+ turbines, whereas projects reaching financial close ten years ago used 3MW machines.

The cost of financing has also dropped significantly, as “investors and bankers have become more familiar with the risk profile of offshore wind projects,” he added.

BNEF expects further cost decreases from a range from about $50-115/MWh for projects being financed today — including transmission costs — to $37-90/MWh in 2030.

Like with onshore, the increased scale of turbines and projects will drive down costs — with fewer, more powerful turbines capturing and generating more energy and prompting fewer trips offshore, saving on technicians and vessels.

But project clustering will also help lower costs as fixed costs can be shared across several projects in close proximity to one another, Brandily added.

BNEF added, however, the report does not reflect what may happen to the LCOEs of different technologies as a result of the economic shock caused by the coronavirus pandemic.

It suggested that plunging oil prices could offer fossil fuels some respite from being beaten on price by wind and solar.

“One important question is what happens to the costs of finance over the short- and medium-term," Seb Henbest, chief economist at BNEF, said.

“Another concerns commodity prices: Coal and gas prices have weakened on world markets. If sustained, this could help shield fossil fuel generation for a while from the cost onslaught from renewables.”