Using figures from Windpower Intelligence, our research arm, Windpower Monthly compared the project data of onshore wind sites in the UK, France, Germany, Denmark and Sweden between 2015 and 2019.

Data was taken from projects with two or more turbines and using machines greater than 1MW. Some projects were discounted as the required information was inaccessible.

That data set showed that the weighted average of turbine capacity across the five countries has grown from 2.68MW to 3.3MW in the five years.

However countries like France and the UK – which claim to be leaders in the field but have both suffered from crippling and non-sensical political involvement – have lagged behind in the technology stakes and thereby missed out on critical capacity.

The clearest indication that these markets are falling behind in using the latest and most efficient technology is shown by the average rotor sized used over the last five years. 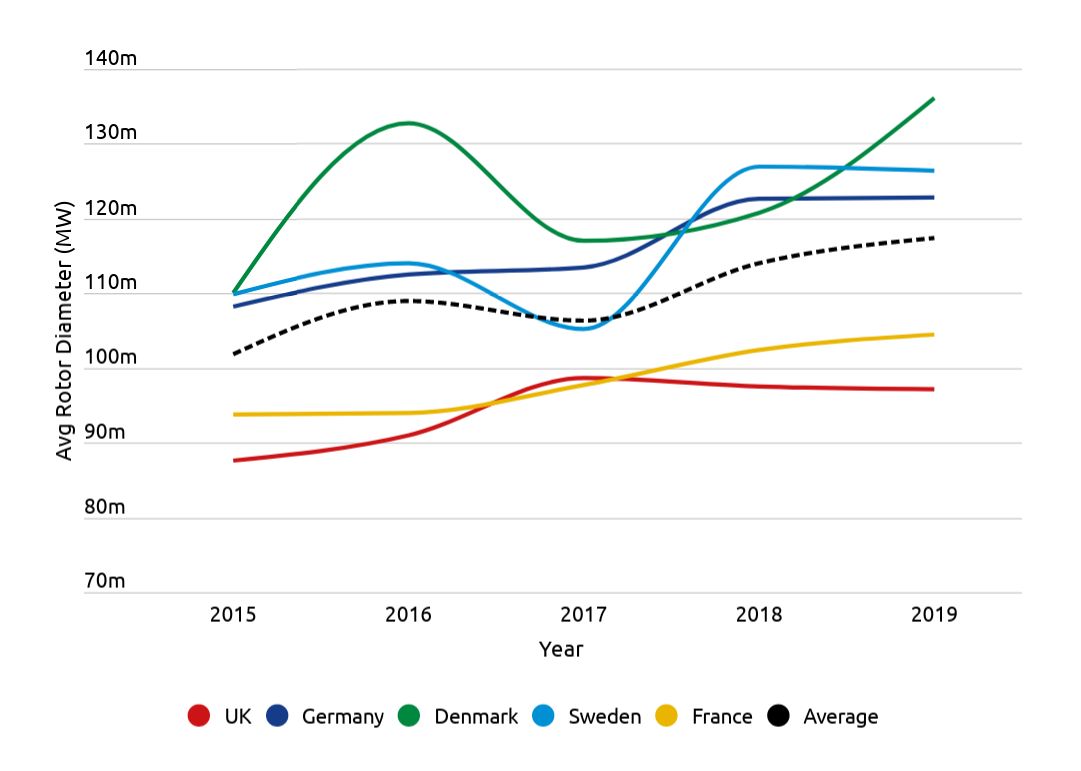 The average rotor diameter, weighted by the number of turbines, in the UK has increased from 87.57 metres to 97.2 metres over the five year period.

However, by comparison, Germany, Sweden, and Denmark all had averages nearly breaking 110-metres in 2015 and are now regularly installing turbines with 120-metre-plus rotors.

The greater capacity size, with the more efficient rotors, shows the UK and France have missed out majorly on capacity and generation, putting their 2030 targets in serious doubt.

French wind farms have suffered from the cumbersome appeals process caused by a misplaced pessimism towards the technology both onshore and offshore.

The country's stringent permitting process also means that while projects are constantly delayed in the courts, developers are unable to alter the turbine choice.

WindEurope has said projects in France could take up to seven years to be fully permitted. It is little wonder, then, that turbine technology has failed to keep pace with developers' hands tied. There are moves to change this. 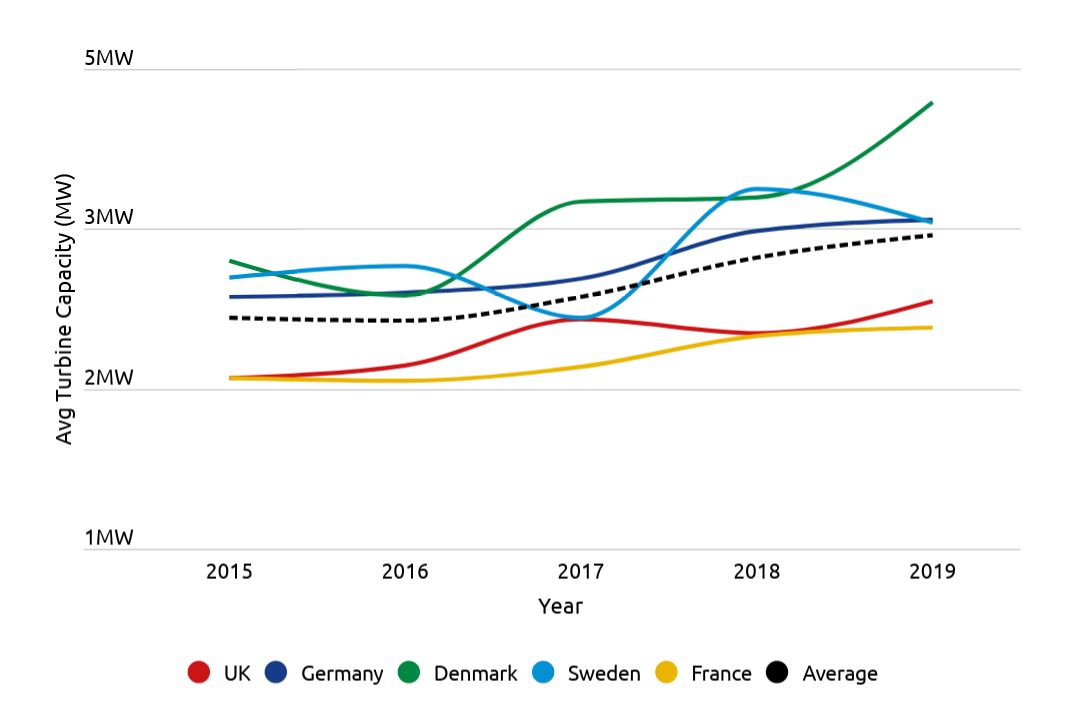 However the half a decade of indecision and red-tape has caused France to miss out on over 1.2GW of potential capacity due to technology constraints.

The UK has also had its fair share of Nimbyism for onshore wind, but mostly in the political classes. The government's official attitudes survey puts onshore wind acceptance from the general public at over 70% for much of the last decade.

The unofficial tip heigh restriction is a key hindrance to accessing the latest technology. At 125-metres, this limit has put nearly every new turbine model from the five major European OEMs out of reach to developers for the last few years.

Using the WPI data, if the UK had kept technological pace with markets like Germany and Sweden, it could have had installed more than 550MW of additional capacity over the last five years. This would put its onshore fleet beyond 14GW and on track to reach 20GW by 2030.

Now, not all the projects in this data set would have been suitable for the tallest turbines. But the data suggests the markets could have been further along with the green transition than they are today, had the latest technologies been utilised.

The argument could be made – fairly – that the US and China are also lagging behind in the technology stakes. The two leading markets in the world have been stuck in the 2MW range for much of the last decade.

But these markets have different dynamics to that of Northern Europe. Land is not at such a premium, meaning developers opt for a lot of smaller cheaper turbines to produce the same power.

That is changing, however, as the higher wind sites are being used up and low-wind speed areas are starting to be developed. This often leads to higher-capacity turbines as well the first of which are now being installed.

Germany was the jewel in Europe's wind crown for many years.

However, 2018 and 2019 saw the market begin to unravel. Permitting red tape, poorly structured auctions and grid constraints have seen new installations collapse, with little hope of recovery in the short term.

"More than 10GW of wind projects are stuck in permitting delays, according to a 2019 survey by consultancy FA Wind," GWEC reported in its annual look at the global market.

"As a result of these and other delays, the average duration for project permitting has nearly tripled since 2010."

That is reflected in the flattening of the curve seen in both charts. There are also fewer suitable sites where wind projects can make a profit, and the looming spectre of a 1km set back rule won't help.

The possibility of repowering some older sites with newer technology offers some hope.