Global onshore O&M costs increased by 20.9% between 2010 and 2020, due to higher-than-expected costs for servicing older assets and more robust service scopes, according to new research by IntelStor.

IntelStor expects this trend to continue as manufacturers try to claw back reduced margins on turbine sales through more expensive O&M agreements, it said.

During this reporting period, the typical scope of O&M agreements has widened, with service contractors increasingly likely to also offer full replacement of components such as gearboxes, generators, electrical systems, and blades in the event of catastrophic failure.

This more comprehensive and expensive type of contract becoming more commonplace means the combined global average cost has increased at a faster rate than that of either ‘standard maintenance’ or ‘full-wrap’ contracts individually. 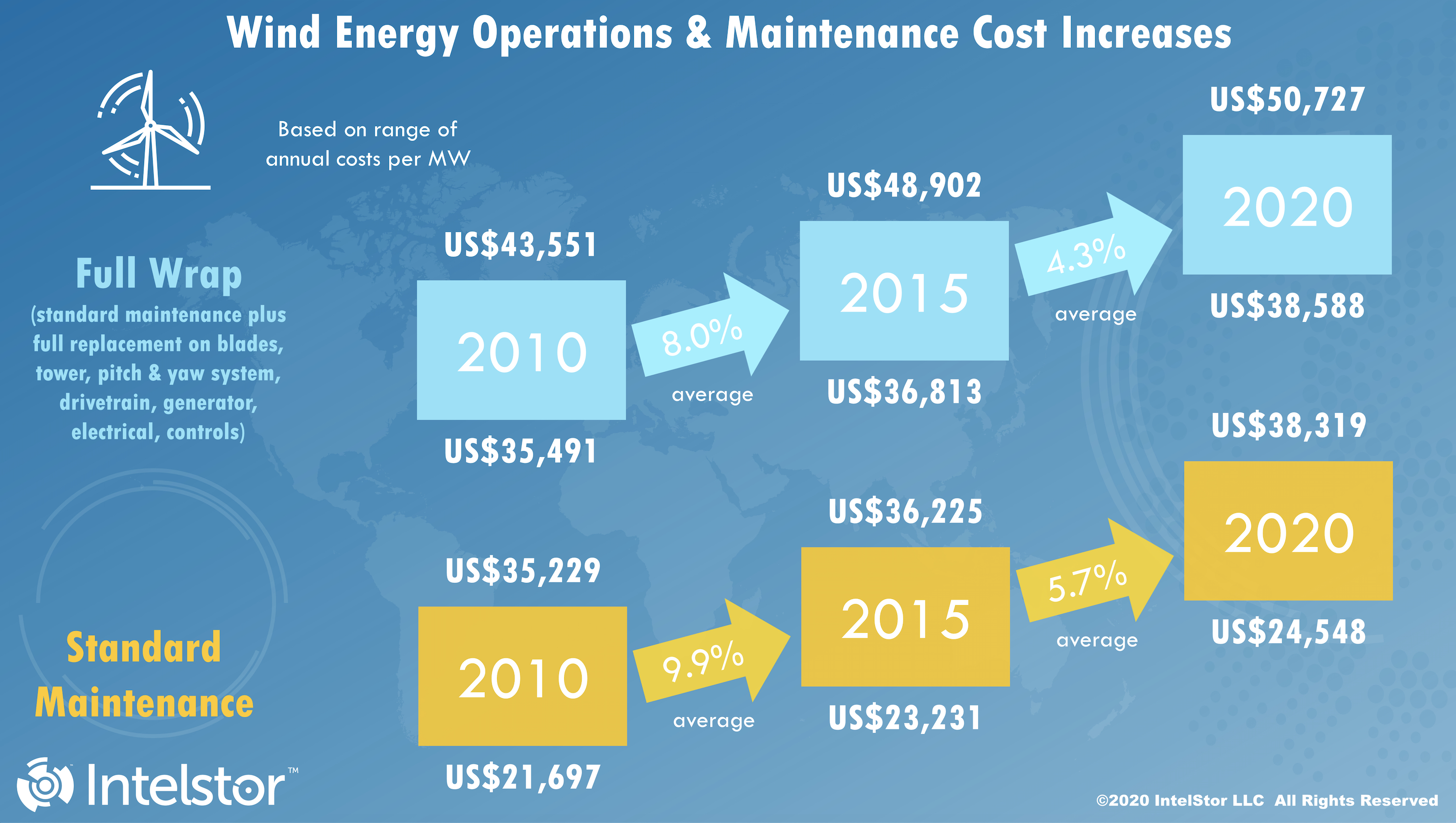 IntelStor believes full-wrap contract costs could increase by 3-5% over the next five years as manufacturers negotiate more expensive agreements.

For manufacturers to take a net positive return over the lifetime of a project, their turbines would need availability of 98-99% availability with only “minimal major corrective repairs”, IntelStor said.

Totaro said this strategy was “risky”, but “not impossible to achieve”.

Major OEMs Vestas, GE, and Siemens Gamesa all reach these levels “thanks to their large global footprint”, he noted.

Operators could make savings by using predictive analytics to better forecast component failures, Totaro suggested — enabling them to plan a scheduled maintenance outage instead of dealing with an unexpectedly broken down turbine.

They could also boost revenues by enhancing their annual energy production through selective power uprating when wind conditions allow, or by making pitch and yaw error corrections, he added.

However, project owners are still relying too much on more traditional, manual approaches to O&M, Totaro said, suggesting they pay for and use analytical tools, but do not fully capitalise them.

“Asset owners or operators are employing the digital service, but they’re still sending field service personnel out to inspect or fix turbines according to the manufacturer specification, rather than trusting the analytics to tell them when the lubricants need to be changed, for instance,” he told Windpower Monthly.

“Additionally, they are still maintaining a huge inventory of spare parts based upon experience rather than trusting the analytics to tell them that a component is likely to fail in three-to-six months and then ordering the replacement.

“It only works if you can trust the predictions being made, and that trust will take time to build up," he added.

The digital service companies can then analyse the operational history of turbines and develop predictive models of component faults and failures, allowing for more proactive action to be taken.

This data could also be used to identify turbine models that frequently have incorrect pitch and yaw settings, IntelStor added.

Taken together, the income from licensing this data could help to partially offset the growing cost of maintenance.

However, asset owners, manufacturers and independent service providers have traditionally been reluctant to share such data with other companies with no commercial incentive to do so.

This is especially true of manufacturers fearing liability exposure over warranty claims.

IntelStor said most companies would likely share more of their data if they were offered a royalty for licensing it, instead of just giving it away to a data pool, as has traditionally been the case.