The much talked about hydrogen economy is just around the corner, and it will be green.

Green hydrogen, where the gas is made from electrolysis using electricity generated by wind and solar, is set to become competitive during this decade, according to a new study.

The Hydrogen Council’s Path to Hydrogen Competitiveness: A cost perspective report, published in January 2020 and written by consultancy McKinsey & Company, predicts renewable hydrogen costs will fall by up to 60% by 2030.

Reasons include lower costs of renewable energy and scaling up of electrolyser manufacturing.

According to the report, an investment of $70 billion is needed for green and low-carbon hydrogen to be competitive.

The study identifies several areas where investment will make the biggest difference.

One of these is production, where achieving competitive renewable hydrogen from electrolysis will require an aggregated 70GW of electrolyser capacity.

"The cost of solar and wind power, the largest driver of renewable hydrogen production costs, has seen an 80% decrease over the past decade.

Recent subsidy-free offshore wind auctions in Europe, and bids close to or below $20/MWh for solar photovoltaic and onshore wind plants have been seen," the report states.

Once the cost of producing green hydrogen reaches around $2.50/kg, it will unlock around 8% of global energy demand by 2030, while a price of $1.80/kg would enable covering as much as 15% of demand by that date.

For example, pairing solar with wind power in Chile should reduce hydrogen production costs to as little as $1.40/kg in 2030.

The report models the 60% cost reduction trajectory for renewable hydrogen, based on a power-to-gas (P2G) plant connected to a dedicated offshore wind farm in Europe, from $6/kg today to 2.6kg in 2030.

The largest reduction in price is expected to come from a 60% reduction in the cost of electrolysers, driven by scale in production, learning rate and technological improvements, as well as from increasing system sizes from 2MW to around 100MW.

This will be followed by a reduction in offshore wind’s levelised cost of energy from $57/MWh to $33/MWh (see below).

It will begin production in August this year with an annual capacity of 350MW, and will ramp to 1GW within three years of starting operations.

CEO Graham Cooley says the company is bidding less than €1 million per megawatt in current tenders.

"We’ve halved the cost of electrolysers in the past three years and are now focused on increasing capacity further and reducing production costs."

"Projects are increasing in size. Today, £6.7 million is the average cost of a project, up from £6 million last year.

"Two years ago it was £4 million. The average project size being tendered for is 7MW, though some of these are well above 10MW in size, and one is near 100MW," Cooley says.

In August 2019, ITM Power partnered with Danish developer Ørsted for a feasibility study funded by the UK government to demonstrate the delivery of bulk, low-cost and zero-carbon hydrogen GW-scale polymer electrolyte membrane (PEM) electrolysis, manufactured in the UK.

The Gigastack project aims to slash the cost of producing green hydrogen through developing a 5MW stack module to reduce material costs, together with semi-automated manufacturing at ITM’s new factory, deployment of 100MW-plus electrolyser units using multiple 5MW units, and innovations in the siting and operation of these large electrolysers integrated with or near to large-scale offshore wind generation. 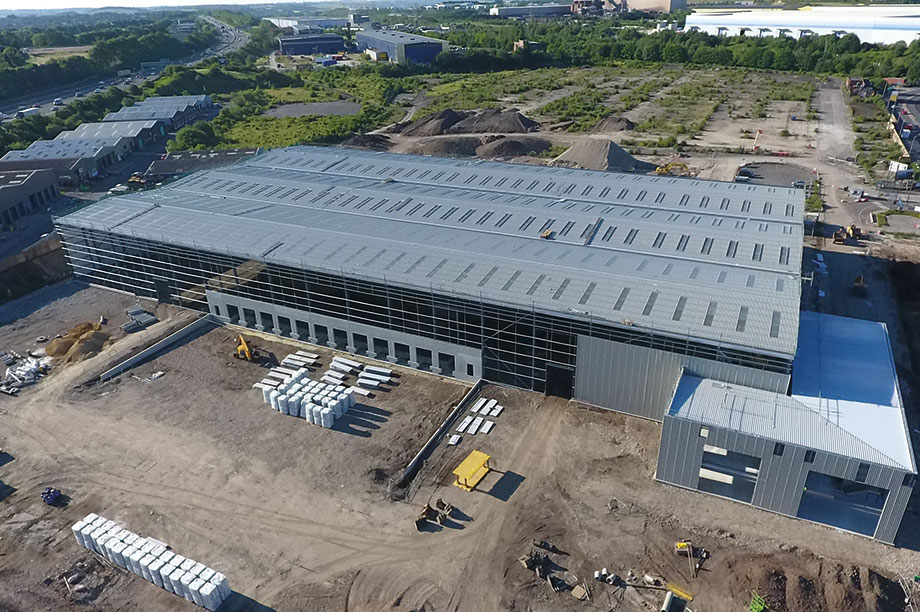 At the time of going to press, the company was preparing for the next phase in the project — looking for potential funding for implementation along with project partner Ørsted.

Several European countries developing offshore-wind resources are also targeting opportunities for producing green hydrogen at scale, affordably, including the Netherlands and Germany, where Dutch grid operator Tennet has been investigating the potential.

TNO Netherlands, an independent research organisation that focuses on applied science, is coordinating the project, which will establish one of the first electrolyser pilots located on an offshore platform.

A 1MW electrolyser will be installed on an operational gas platform 12km off the coast of the Hague, owned by Neptune Energy, to show that power-to-gas can be achieved in an offshore environment.

TNO Netherlands is in contact with several providers of electrolysers, which will need to make modifications of their containerised equipment to ensure reliable operation and robust performance at sea, according to Rene Peters, the organisation’s director for gas technology and energy markets.

One of the reasons Neptune Energy’s platform was chosen is because its operations are powered via a subsea cable connected to shore, supplying it with renewables-sourced electricity, which will also supply the electrolyser to produce green hydrogen.

In future, the idea is that offshore electrolysers will be connected to offshore wind farms.

The platform will also host a desalination plant, as the water for the electrolysis will be sourced from the sea.

There will also be important health and safety considerations to address as oxygen is a by-product of electrolysis.

The green hydrogen produced will be delivered to an existing gas platform and transported to shore via the subsea gas pipeline network.

The project timing is down to the lead time of the electrolyser producers. "All suppliers we have spoken to give a delivery timeframe of 1.5 years," Peters says.

"Following installation and commissioning, the offshore electrolyser will be up and running by the end of 2022."

The project has a budget of more than €10 million and NSE has applied to the Dutch government for further support.

After the 1MW pilot, NSE will commission a 10MW offshore electrolyser, then a 100MW version towards the end of this decade, according to Peters, in step with the Netherlands’ growing offshore wind capacity.

In the UK, the Oil and Gas Authority and seabed manager the Crown Estate are also interested in NSE because they see future opportunities to collaborate and share learning in terms of how offshore wind and the offshore oil and gas sector can be more closely aligned through using offshore fossil-fuel infrastructure to store and transport green gases generated with electricity from offshore wind.

"Part of NSE covers regulatory and policy aspects — nothing can be realised without the support of various stakeholders that will be impacted, including fisheries and shipping sectors, so we have to take a strategic planning approach and identify which offshore oil and gas assets can be used and which cannot," says Peters.

According to Vigen Nikogosian at consultancy Ebridge, green hydrogen is a hot topic in Germany.

Transmission system operators Tennet and Amprion are each involved in different projects to build 100MW electrolyser plants, with several other projects in the 20-30MW range.

"There is a huge move towards large-scale hydrogen production facilities," says Nikogosian.

The German government is working on a hydrogen framework, and in January published its national hydrogen strategy to 2035, he adds.

For hydrogen to become a central component of the country’s decarbonisation strategy, the entire value chain must be further developed, while opportunities have to be created to produce and use carbon-dioxide-free hydrogen as a decarbonisation option, the document states.

"From the federal government’s point of view, only carbon-dioxide-free hydrogen produced on the basis of renewable energy (‘green’) hydrogen is sustainable in the long term.

"However, in order to be able to achieve a rapid market ramp-up of hydrogen technologies for the decarbonisation of various application areas, carbon dioxide-neutral (‘blue’) hydrogen will also have to play a role, above all for economic reasons," the strategy reads.

Nikogosian says the government is considering a €600 million budget to support the building of hydrogen production plants and applications focused on industry and transport.

Last year, Ebridge designed a proposal to establish a future tender framework for producing hydrogen from offshore-wind-generated electricity, which is currently under consideration by the German government.

Elsewhere in the country, gas operators are working on plans to show how the existing gas grid can be upgraded for more hydrogen in future, which would allow the gas to be transported over long distances.

The government also sees opportunities to cooperate with other countries around the North Sea, such as Denmark, in relation to producing hydrogen at scale from offshore wind-produced electricity, Nikogosian adds.

A key issue to be addressed is the overall efficiency of hydrogen transportation and distribution, says Linde’s Heisterkamp.

"The future success of the industry also depends on decoupling the point of production from the point of use," he explains.

"In other words a pipeline infrastructure for hydrogen is key to success. With that hydrogen can be produced where conditions are ideal and the full potential of hydrogen for decarbonising sectors can be deployed."

A start-up has raised €8 million to build France’s first wind-powered hydrogen plant in the north-west of the country, with plans to deploy its concept to offshore wind by 2025.

Lhyfe, a French company founded in 2017, has developed a way to produce hydrogen with electrolysis using renewable energy without being connected to the grid.

"This is the first time an industrial-sized electrolyser will be powered with 100% renewable energy," Lhyfe founder Matthieu Guesné said.

Construction of the new demonstrator plant will begin in the next few months. It will be located beside an eight-turbine onshore wind project at Bouin, 50km south-west of Nantes in the Loire region.

The site is owned by local authorities that have also invested in Lhyfe.

Some of the turbines at the wind farm will initially be set aside to power the electrolyser.

By 2021, the company aims to be producing 300kg of hydrogen daily — gradually moving up to several tonnes — which will be delivered to the nearby town of La Roche-sur-Yon, where a hydrogen station will be installed to fuel the town’s newly-converted fleet of hydrogen-powered buses and refuse-collection vehicles.

Lhyfe’s model has been designed for local use and can be connected to different sources of renewable energy, which means it can be deployed easily.

The hydrogen it will produce is initially intended for transport and local industrial needs.

"We have developed an efficient and competitive turnkey industrial production solution, enabling local sourcing around our sites, which creates local jobs, income and energy independence.

"This is a break with the current model," said Guesné.

Over the next few years, the company hopes to be producing hydrogen from offshore-wind projects.

"The idea is to have small dedicated offshore wind projects, about 50km from the coast where they cannot be seen and where wind is constant.

"This is too far for producing electricity economically but not hydrogen. We will just replicate what we do onshore, offshore," said Guesné.