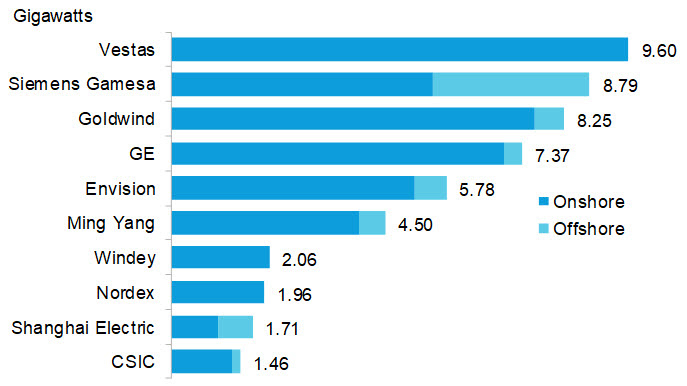 Vestas held on to top spot despite its market share dropping seven percentage points to 15%. Its commissioned capacity also fell 4.8% to 9.6GW.

The surge in newly operational capacity was driven by strong years in China and the US as developers rushed to build sites before subsidies expired, BloombergNEF (BNEF) explained in its 2019 Global Wind Turbine Market Shares report.

The research and data firm expects another strong year for the world’s two largest markets, helping to drive an expected 23% increase to 75GW of commissioned capacity globally in 2020 — 69.4GW onshore, 6GW offshore — it added.

However, Oliver Metcalfe, lead author of the report and BNEF analyst, warned: “Uncertainty post-2020 could expose some bigger players unless they diversify to new growth markets.”

Siemens Gamesa doubled its offshore installations and tripled its US capacity in 2019, helping it to rise from fourth place to second place.

GE accounted for more than half of the 9.3GW new capacity commissioned in its home market in 2019, enabling it to overtake Vestas as the top supplier in the US, and to finish fourth globally, behind Goldwind.

Bumper years in strong markets such as the US and China helped some manufacturers, but weaker activity in some markets hit other OEMs, the analysts added.

Meanwhile, Suzlon (464MW, all onshore, down from 933MW) suffered a similar fate in India, where insufficient grid infrastructure and delays in land allocations and tenders hindered installation.

New wind farms were commissioned in 43 countries last year, according to BNEF figures.

Total onshore additions were 13.3GW in Americas, 9GW in Europe — including Turkey and Russia — 500MW in Africa and the Middle East, and 30.4GW in Asia Pacific.

Siemens Gamesa more than doubled its offshore installations in 2019 (up to 3.3GW), retaining the top offshore supplier spot, ahead of MHI Vestas (1GW).

It commissioned nearly 2GW in UK waters alone, including the 1.2GW Hornsea One project off the east coast of England.

Tom Harries, head of wind research at BNEF, warned that offshore installations were likely to dip in 2020, before ramping up and breaking the 10GW-per-year barrier in 2023.

“This growth outlook has led to intense competition between turbine makers. At the moment, the advantage lies with the manufacturer selling the most powerful turbine," Harries said.

“Industrialising the production of a slightly smaller turbine through higher volumes could lower costs and prices.

“The opportunities for turbine makers to offset lower prices with long-term maintenance contracts is less clear than it is in onshore wind.”