The UK government has pledged £7.5 million (€9 million) to support the research stage of the Gigastack project, which is being carried out by electrolyser manufacturer ITM Power, offshore wind developer Ørsted, oil and gas company Phillips 66 and consultancy Element Energy.

This funding will support a feasibility study into connecting a 100MW electrolyser system — made up of 20 5MW modules — to Ørsted’s 1386MW Hornsea Project Two Hornsea Project Two (1386MW) Offshoreoff Yorkshire, UK, Europe Click to see full details wind farm, which is in line to be the world’s largest when commissioned in 2022.

In the modeled scenario, output from Hornsea Two would be used to split water into hydrogen (and oxygen) through electrolysis. This green hydrogen would then supply Phillips 66, which has a refinery in the Humber region, north-east England.

The Gigastack partners explained that this would reduce the carbon intensity of Phillips 66's fuels.

However, an Ørsted spokesman cautioned the Gigastack project is limited to research for now and that it is "too early to speculate about" whether it will result in a physical project.

Anders Christian Nordstrøm, vice president for hydrogen at Ørsted, hoped the project could help to bring down the cost of renewables-driven hydrogen production.

“Creating renewable hydrogen with offshore wind really has the potential to decarbonise industrial processes, and what is needed now is to scale up the electrolyser technology and bring the cost down,” he added. 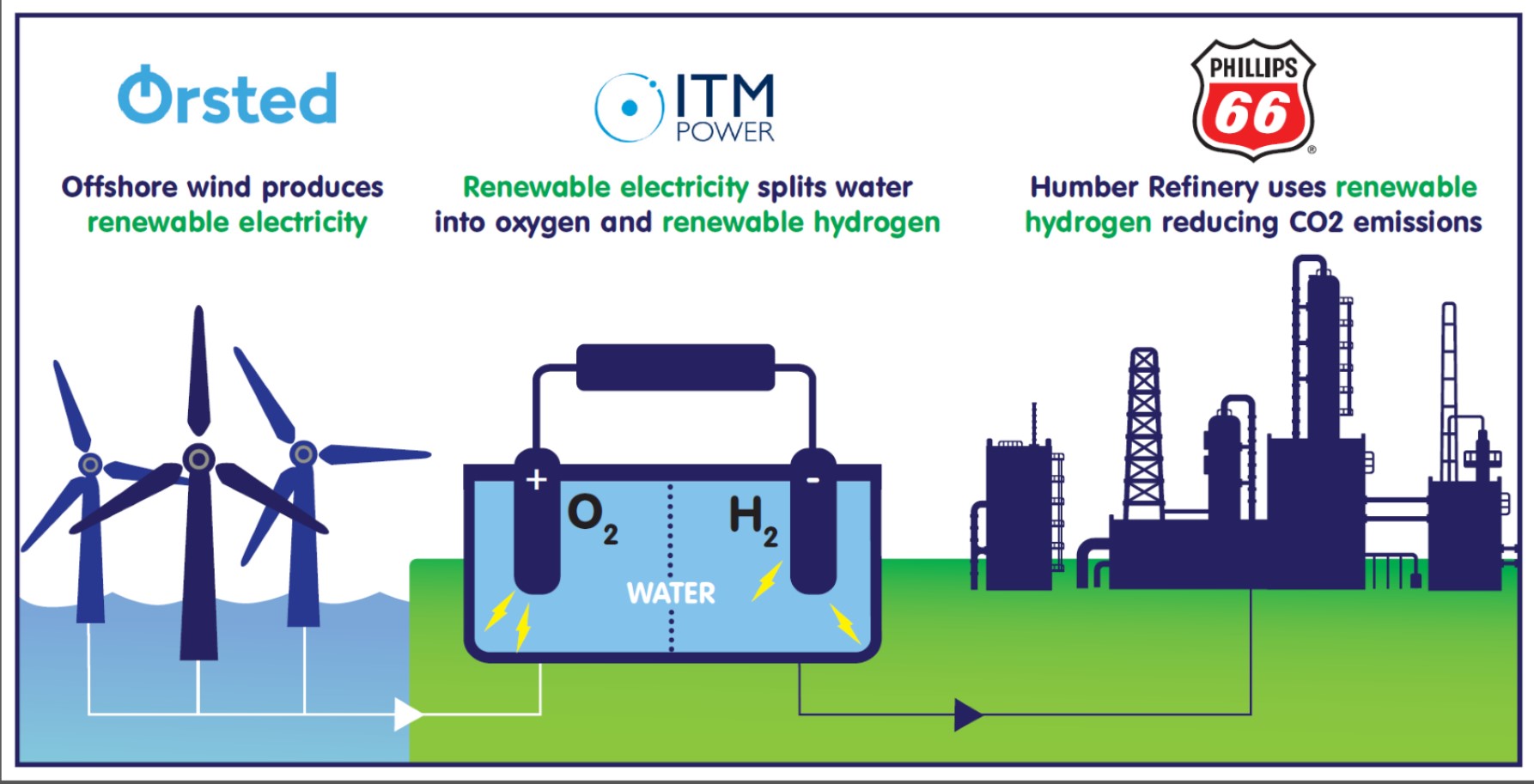 In the first phase of the Gigastack project, which ended last year, ITM developed designs for 5MW electrolyser modules and examined industrial applications of the technology.

The manufacturer worked with Ørsted to understand the potential synergies with offshore wind, and carried out market analysis and explored business models for the first industrial-scale 100MW electrolysers alongside Element Energy.

With the funding from the UK's energy ministry, it will now carry out a feasibility study into stacking the 5MW modules into a 100MW electrolyser system, which would be connected to Ørsted’s 1.3GW-plus wind farm.

The 100MW system could be constructed in 20MW phases, with 5MW stacks used in each of its five stages, Ørsted suggested.

ITM Power will install and trial its 5MW electrolyser stacks as well as semi-automated manufacturing machines for the large-scale and high-volume manufacturing of these modules.

It will begin production in August 2020 with an annual capacity of 350MW, but aims to ramp up to 1GW within three years of starting operations.

RenewableUK’s head of policy and regulation Rebecca Williams said: “Green hydrogen has the potential to be a gamechanger in the energy sector, accelerating the transition to net-zero emissions.

“This is a groundbreaking project, with what will be the world’s largest offshore wind farm set to provide renewable electricity to make green hydrogen, which can be stored to make our power system more flexible, or used as a clean fuel for transport, industry, and heating.”

EDF believes court ruling over indigenous land does not apply to its project on private land, and plans to proceed with construction