Capacity increased despite the continued slowdown in Europe’s biggest wind power market, Germany, but was boosted by signs of a revival in the continent’s second largest market - Spain.

Wind farms produced 417TWh in 2019 and accounted for 15% of electricity consumption in Europe - one percentage point higher than the previous year — according to WindEurope's annual trends and statistics report.

However, if wind power is to fulfil its role in the European Commission’s (EC’s) Green Deal, which targets greenhouse gas (GHG) emissions reductions from 1990 levels of at least 50% by 2030, and carbon neutrality by 2050, more onshore and offshore installations are needed, WindEurope stated.

CEO Giles Dickson said: “That requires a new approach to planning and permitting and continued investment in power grids.

“The National Energy and Climate Plans (NECPs) for 2030 are crucial here. The European Union (EU) needs to ensure they’re ambitious and rigorously implemented.” 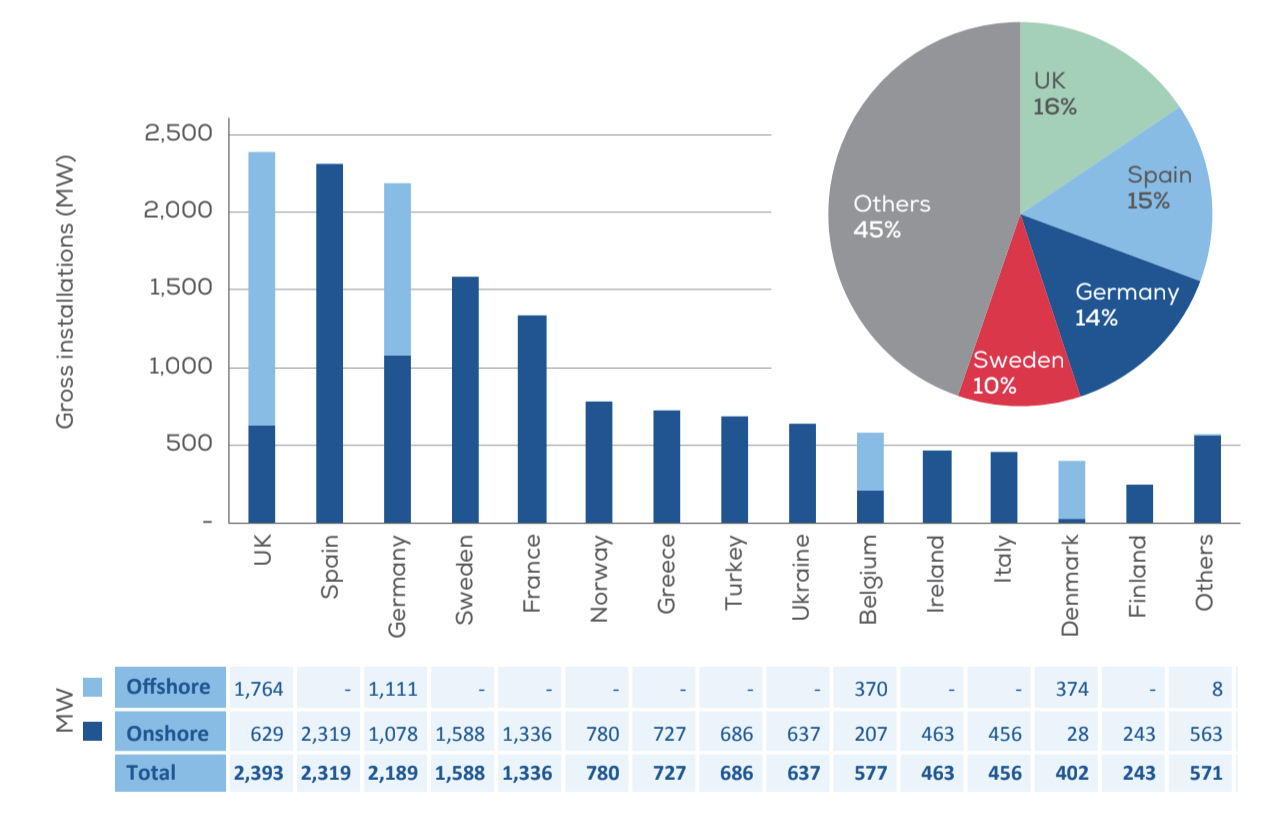 The UK (629MW onshore and 1,764MW offshore, for a total 2,393MW) installed the most new capacity in 2019, according to WindEurope figures, ahead of Spain (2,319MW, all onshore), which - as covered in Windpower Monthly's forthcoming March edition - recovered following a six-year slump.

Germany installed 2,189GW onshore and offshore last year, with its 1,078MW of onshore additions the country’s lowest tally since 2000. New investments slowed in Germany, which has been hit by permitting delays, with final investment decisions (FID) reaching a historic low of €300 million for 180MW of onshore capacity.

Sweden added a national record of 1,588GW onshore wind farms in 2019, but with its electricity certificate system phasing out after 2021, WindEurope warns there is “significant uncertainty” for the near-term future market.

Government tenders were held in 11 European countries last year, resulting in the award of 15,409MW of new capacity — 8,583MW onshore and 6,826MW offshore.

WindEurope warned that it is difficult to compare results due to differences between support mechanisms and their length, markets’ maturity and other conditions such as cost of capital, permitting and other sources of revenue and risk.

However, the industry body highlighted several notable auctions, including Poland, which held Europe’s largest onshore wind auction last year, awarding 2.2GW at an average price of €49/MWh. The UK awarded the most offshore wind capacity in 2019 — 5,466MW at £40.63/MWh (€46.16/MWh) in 2012 prices, including the costs of grid connection — WindEurope noted.

It also reported that five out of Germany’s six onshore rounds were undersubscribed in 2019, resulting in just 1,843MW being awarded from 3.7GW of capacity available, with developers strugglng to secure all the necessary permits ahead of tenders.

The country’s most recent onshore round was oversubscribed, but the German wind energy association cautioned that it “remains to be seen” whether the onshore wind sector is on its way to recovery.

Investments in new wind farms dropped 24% year on year to €19 billion in 2019, WindEurope noted, with total FID values dropping for both onshore and offshore projects.

In monetary terms, investments were at their lowest levels since 2013.

The new capacity being financed also dropped 28% last year, with investments made in 11.5GW of new capacity.

However, WindEurope noted that cost reductions across the industry’s value chain have made it possible for investors to finance more capacity for less cash.