Dismantling wind turbines is a growing business, with 400MW taken down in Europe in 2018, almost all of it onshore.

Germany accounted for more than half this capacity, disassembling 249MW, or 205 turbines.

The country has by far the largest onshore fleet in Europe, with total capacity reaching 53.2GW by mid-2019 across nearly 29,250 turbines, which will all, at some point, reach the end of their operational lifetime.

Many German turbines installed in the industry’s pioneering years have passed their 20-year technical design lifetime but keep running, thanks to a Renewable Energy Act 2000 rule that set the clock back to zero for 20 years of support for all those that were already online.

The first big wave of decommissioning is building up for 2021, when those 20 years of support are due to expire for around 6,000, mostly small, turbines totalling some 4GW.

Their owners may then sell directly into the wholesale electricity market or use alternative marketing options, such as power purchase agreements (PPAs), assuming costs such as the land lease, service and maintenance, insurance, and regular checks on structural stability, can be covered. Otherwise they face closure and dismantling.

Another option is repowering, which also involves taking down the old turbines before replacing them with newer, bigger machines if project owners can overcome Germany’s permitting hurdles, which are currently throttling both new and repowering onshore development.

A recent report by the UBA, the German government’s environment agency, warns of problems including potential recycling bottlenecks for fibre-reinforced plastics in rotor blades, as well as safety and environmental risks if turbines are not dismantled in a professional manner.

The agency is calling for proper guidance on dismantling procedures and clear regulations to protect people and the environment while ensuring high-quality recycling of materials.

But with onshore development stuck in the doldrums despite a growing need for renewables capacity to help tackle the climate crisis, turbine dismantling is often seen as a last resort.

"Wind farms will continue to be operated for as long as possible because there is demand for green electricity," says Lutz Schiermeyer, repowering project manager at Deutsche Windtechnik, which has dismantled several hundred turbines in the past decade.

There are mechanisms in place to help owners of wind farms exiting the support system — many of which are on a far smaller scale than those built more recently.

One of these is Enercon’s energy concept 20 +, under which wind farms are taken into a pool handled by the company’s direct-marketing subsidiary, Quadra Energy, and the green power is sold via PPAs.

According to an Enercon spokesman, industries such as the automobile and chemicals sectors with ambitious decarbonising plans are keen to buy green electricity, and have welcomed the firm’s new green power purchase and service agreement (green PPSA).

"Since its launch in early November, Quadra has signed contracts with about 40 wind farms in Germany totalling around 100MW — and we are in talks with many more customers with whom we expect to sign further contracts soon," adds Thomas Krings, the company’s head of sales.

Interest in electricity from turbines leaving the support system, which then has the added value of renewable certificates, could shift the German turbine dismantling peak to 2025 and beyond.

Assuming turbines operate for an average of 20 years, the UBA considers Germany’s existing recycling infrastructure is already able to process the up to 5.5 million additional tonnes of waste concrete, nearly one million tonnes of steel, plus volumes of copper and aluminium that will accumulate each year as decommissioned machines are scrapped. 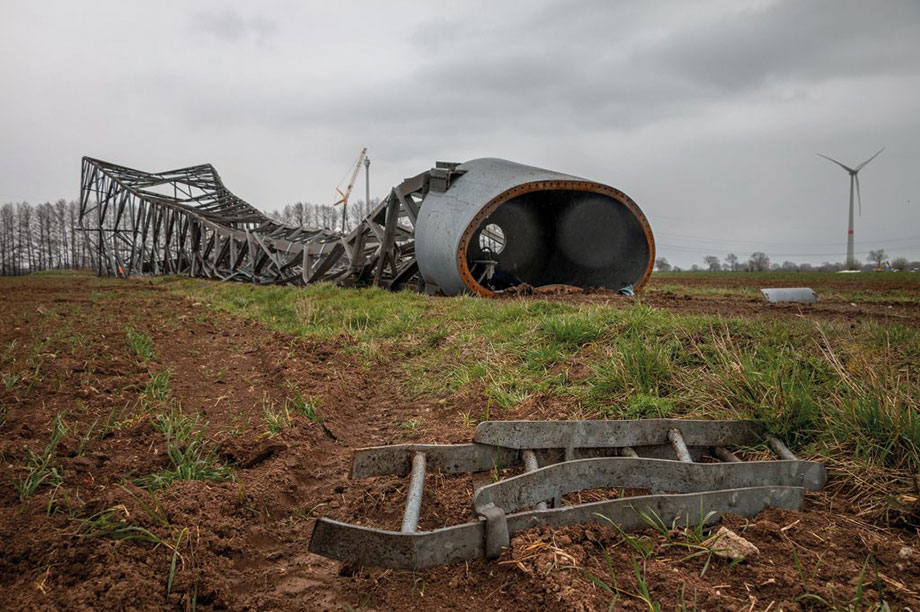 Due to high costs of hiring a crane, a controlled blast is often a safer and more cost-effective method to take down a lattice tower taller than 70 metres that cannot be resold (pic: Deutsche Windtechnik)

"An increased amount of scrap from dismantled wind turbines in Germany will not noticeably impact world market prices", says Schiermeyer.

Prices fluctuate all the time, by as much as 30% for steel in 2019. But the price for steel from a wind farm is negotiated individually, depending, for instance, on the transport route and effort required in cutting the steel into transportable pieces, he adds.

"The best option is refurbishment and re-use — we hold the most common blades ready for swift replacement when customers have a blade damage problem," says Schiermeyer.

The recycling of glass-fibre composite blades is relatively complex, compared with steel and other materials, but the blades have turned out to be long-lived and economically efficient — and they represent only a small part of the overall turbine mass.

"The glass-fibre composite share in the total turbine mass of a Vestas V52 with a 74-metre tower is just 4%, and less than 1% if the steel and concrete in the foundation is included," he points out.

Recycling currently involves chopping up the blades and shredding them before burning the material in waste incinerator plants or cement works.

The UBA considers the latter as the best option because the fibre composite is an alternative to coal or other fossil fuels, and the resulting ash is used in the cement clinker.

Neocomp in Bremen, part of waste-processing company Nehlsen, operates the only plant in Germany that can process composites containing glass-fibre from a range of sources.

Its services include rotor-blade collection from wind farms. The firm has a capacity of up to 80,000t/year for GFK.

The carbon-fibre composite (CFK) component in blades is trickier to deal with because the carbon fibres conduct electricity, presenting problems, for instance, in the electrostatic filters used in waste incinerator plants, until new filter types have been developed.

But the UBA sees the amount of CFK/GFK composite in blades staying below 10,000t/year until 2038.

Meanwhile, companies such as CFK Valley Stade Recycling and CarboNXT are specialising in fibre recovery using thermal processes such as pyrolysis and chemical processes like solvolysis, hydrogenation and alcoholysis, according to a recent expert paper on wind-turbine recycling by German wind energy association BWE.

However, the UBA is concerned about the dearth of facilities like Neocomp’s and proposes "waste product responsibility for rotor blades" to encourage additional recycling capacities.

Although still unclear whether this heralds an obligation for manufacturers to take back blades, turbine builder Enercon announced in early 2019 that it intends to build a pilot ultra-high temperature hydrolysis (UHTH) plant with partners at an unspecified site for improved recycling of blade composite material.

The process would separate organic from non-organic components, generating a "synthetic" methane gas to combust in power or heat production plants or to be used as raw material for hydrogen production, according to the spokesman.

Enercon still intends to realise the project, but has given it a lower priority for the time being while it concentrates on the comprehensive turnaround programme announced in November to reorganise the company and return it to profitability.

Another task will be developing recycling methods for the small amounts of rare earths used in permanent magnet generators as there is currently no feasible recycling methodology available, notes the UBA.

It forecasts 100-200 tonnes of waste containing rare earth will arise from turbine recycling annually from 2033 to 2040.

The UBA is also concerned about potential "considerable shortfalls" in funds for wind-farm dismantling from the mid-2020s, concerned that wind farm operators could take the "insolvency escape route."

German wind-project operators — usually companies — have a legal obligation to create a dismantling reserve fund and must take care of the dismantling, disposal and recycling.

"I am not aware of a single wind farm that filed for bankruptcy before dismantling, not least because every dismantled turbine has a value," says Deutsche Windtechnik’s Schiermeyer.

"The notion that taxpayers have to shoulder costs in connection with turbine dismantling is a fairy tale. In Germany, this is only true of nuclear-power stations," he says.

The UBA gives €30,000-60,000 per megawatt as a rough guide to turbine dismantling costs, adding that wind farm size, location  and turbine type affect the numbers.

"Spreading crane and other dismantling infrastructure costs across a larger number of turbines can substantially reduce expenditure per turbine, and earnings from metal recycling or the sale of second-hand components help to counter the costs," says Schiermeyer.

While recycling a steel tower makes a positive contribution, disposing of concrete rubble from a tower is free in some parts of Germany, but in others, comes at a price.

Controlled explosion of concrete tower segments or the foundation can be cheaper than demolition using a crane or a digger.

Disposing of blades without carbon-fibre content costs around €200-1,400 per tonne, according to UBA estimates, while the cost for those with carbon content will be higher. 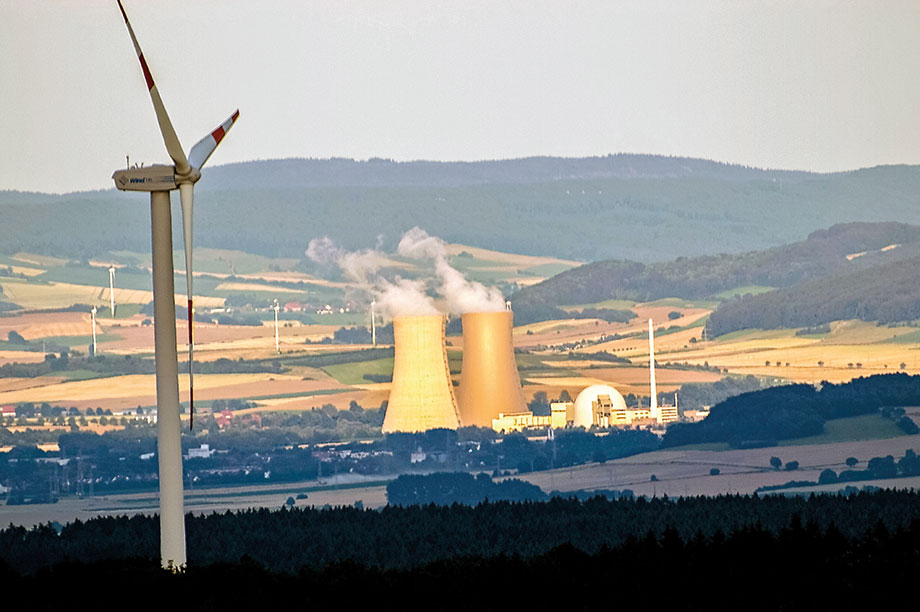 For instance, €1.45 billion in reserves have so far been accumulated to dismantle Germany’s 1,360MW Grohnde nuclear reactor in Lower Saxony (right) once it closes at the end of 2021 — equivalent to €10.7 million/MW, for work that won’t be finished until 2042.

The reactor has generated 3,56TWh since coming online in 1985, transposing into reserves built up so far of €4.1 million/TWh.

Not only is wind power cheaper to build and dismantle, crucially it leaves no radioactive legacy, and does not burden future generations with long-term storage costs for radioactive reactor materials and fuel.

In 2016, Germany’s nuclear-plant operators agreed to pay €23.34 billion into a state fund to cover the costs of intermediate and long-term storage of radioactive waste, in return shedding all further liability.

The state is now solely responsible for finding a suitable site, building and running a long-term storage facility for radioactive waste, so the risk of higher costs is shouldered entirely by the taxpayer — for hundreds of years.