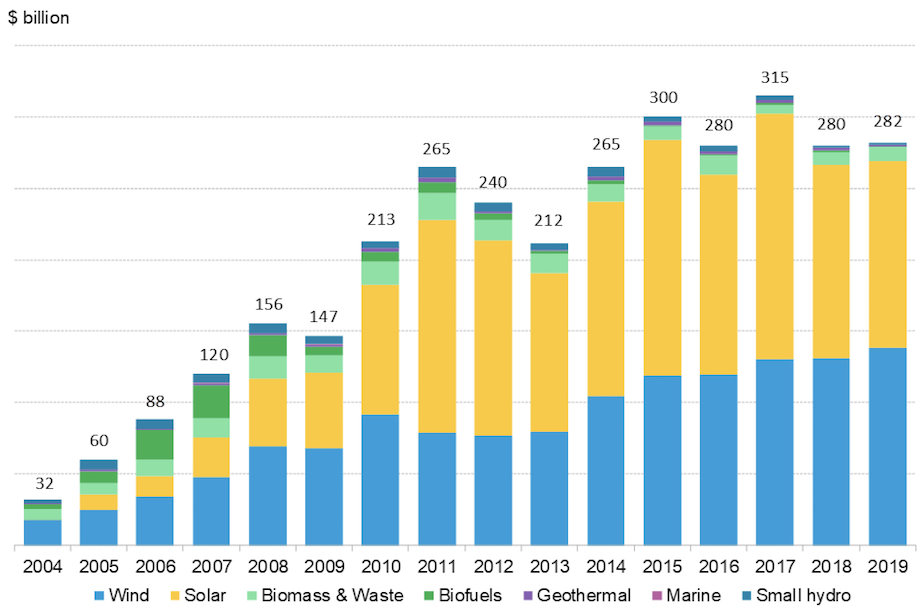 In total, $138.2 billion was invested in wind power in 2019 while total renewable energy spending rose to $282.2 billion, according to BloombergNEF (BNEF).

Despite a subdued start to 2019 renewable energy investment activity picked up in the second half of the year, with increased interest in US onshore wind, and offshore wind in China and Europe.

With multi-billion-dollar financings for projects in UK, Taiwanese and Chinese waters in the fourth quarter, spending on new offshore wind farms rose 19% to a record-high $29.9 billion.

“We expect the (offshore wind) sector’s global momentum to continue in 2020, with the focus on gigawatt-scale projects in the UK North Sea and the first commercial arrays off the US East Coast," said Tom Harries, head of wind research at BNEF.

Meanwhile, solar spending dipped 3% to $131 billion, as wind power overtook it as the best financed renewable energy source in 2019.

China v the US

Meanwhile, in the US a record-high $55.5 billion was spent on renewables in 2019, as wind and solar developers rushed to qualify for the tax credits scheme, which was due to be scaled back in 2020.

BNEF’s head of Americas, Ethan Zindler, said wind and solar being “more cost competitive than ever” also helped drive investment despite the Trump presidency being “not particularly supportive of renewables”.

Investment was up 3% to $4.4 billion France, while the $3.4 billion spent in Ukraine was 56% more than the previous year.

However, renewable energy investment of $5.3 billion in the UK was down 40% its lowest spend since 2007.

Renewables investments fell in other key Asia-Pacific markets, including a 10% drop in Japan to $16.5 billion, a 40% decrease in Australia to $5.6 billion, and 14% decline in India to $9.3 billion.

However, annual spending reached a record-high for renewables in the United Arab Emirates, where most of the $4.5 billion spent there last year was on a 950MW solar thermal and photovoltaic complex.

Finally, several South and Central American markets saw spending increase in 2019, with renewables investments up 74% in Brazil to $6.5 billion, and up 17% in Mexico to $4.3 billion.

Financings in Chile totalled $4.9 billion and were up four-fold from the previous year.

However, renewables spending in Argentina of $2 billion was down 18% year on year.

EDF believes court ruling over indigenous land does not apply to its project on private land, and plans to proceed with construction