The argument for renewables being the cheapest form of new generation has been made. The argument for more capacity, for some reason, has not. That is what Ben Backwell, CEO of the Global Wind Energy Council, is aiming to achieve.

Wind, and renewables in general, do not need to become cheaper in 2020. Indeed, they cannot afford to be any cheaper.

"If you keep getting cheaper, you’ll eventually get to zero," Backwell said on the sidelines of the WindEurope Offshore 2019 conference and exhibition in Copenhagen in late November.

"Do we need to say we’re going to get cheaper? Not in every market. From the outside, the industry looks great. It has seen a decade of achievement and attracted new actors and investment," he added. "But we’ve been victims of our own success."

There is now too much money and not enough projects. This is driving fierce competition, forcing prices down further and squeezing profits. The industry is feeling the effects, with even some major OEMs facing financial difficulties.

The answer to this, and to the climate change targets — which seem to become increasingly unattainable with each day that passes — is capacity, according to Backwell. 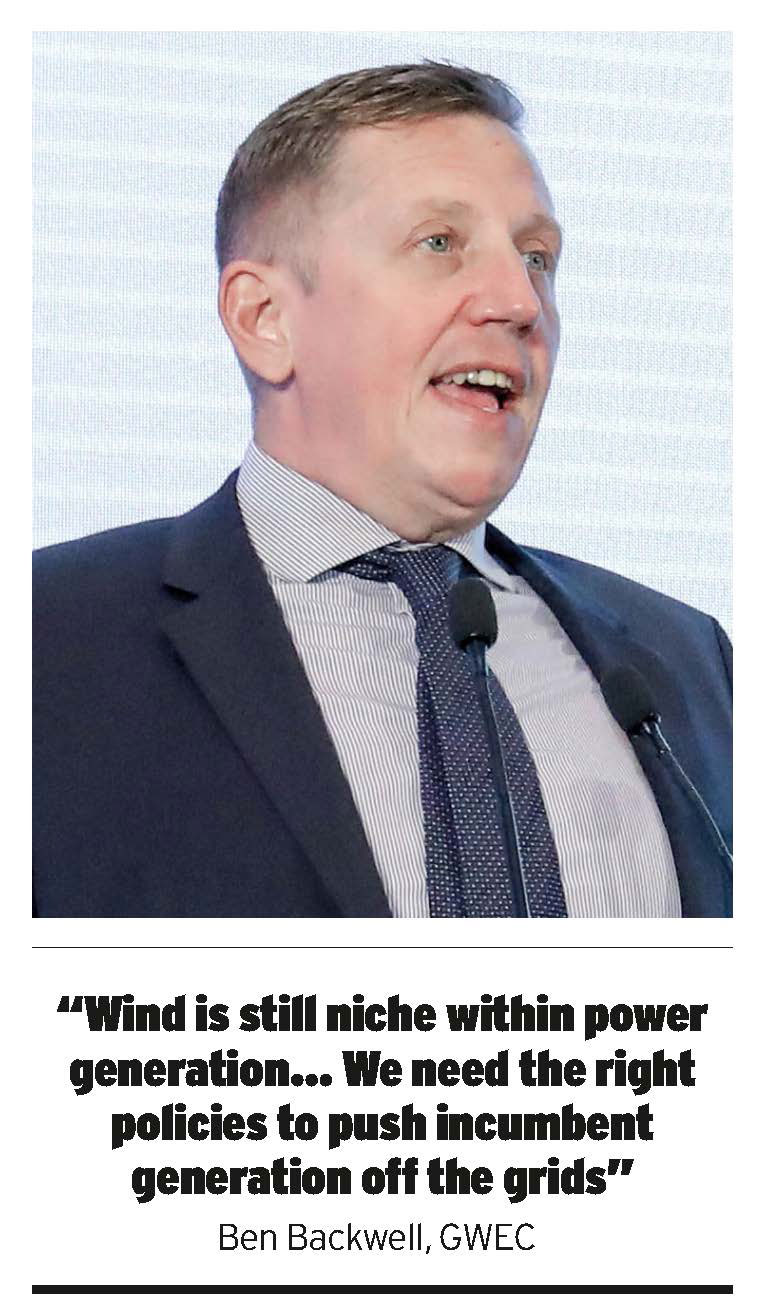 "Wind is still niche within power generation," he pointed out.

DNV GL figures show wind accounted for less than 1% of the world’s primary energy source in 2018.

To stay in line with the Paris climate targets, wind will to have to play a major role, while carbon-emitting forms of generation need to be taken off the grid as soon as possible.

Spain and the UK are leading the way. Both countries have closed a number of coal plants and coal now contributes only now a small fraction of each country’s electricity generation.

But more needs to be done in some of the other major economies.

"We need the right policies to push incumbent generation off the grids. We have underestimated the market design to achieve this. Regulations have not been thought out," Backwell admitted.

He said the current market design was simply handing money to the coal and gas generation currently hogging the grid.

To illustrate this point, Backwell pointed to a recent Portuguese tender that saw solar projects securing power contracts at €14.8/MWh.

If renewable generation can operate at such a low cost, why do we keep paying the market rate of €40-50/MWh for conventional generation? It means that money is being thrown away, he argued.

Ultimately, national governments need to take more responsibility and make sure they have the right priorities when deploying new generation, Backwell said.

The recent swell of climate awareness, driven by Greta Thunberg, the school-strike youth movement and Extinction Rebellion is being noticed by those in power. But it now needs to be translated into political action, and wind needs to use this to its advantage. "We need to declare a climate emergency," Backwell said.

Emerging countries "get it" because they are most at risk, he said. "They don’t want to wait." Unfortunately, they often don’t have the investment or policies in place to support the transition.

"It’s becoming harder to argue publicly for fossil fuels," Backwell added, calling for more action from international institutions like the UN and the World Bank to encourage deployment of renewables worldwide and to help fund it.

Together with governments and major companies they need to take stock of the situation and do something about it, he said

There is more the industry could do, too, such as help with the reskilling of jobs to support the shift to clean generation, he said. "We’re going to need millions of people."