The Australian Energy Market Operator’s (AEMO) draft 2020 integrated system plan (ISP) provides a roadmap to the energy market for the next two decades.

The report outlines a range of scenarios, but its central forecast predicts a shift from a centralised coal-fired generation system to a "highly diverse portfolio dominated by distributed energy resources and variable renewable electricity".

AEMO said its modelling showed this shift was the "least-cost-and-regret transition".

Australia will become increasingly dependent on distributed renewable energy resources, such as roof-top solar, for much of its electricity. This will also need to be supported by local storage and load management.

With more renewables on the grid, AEMO also forecasts the need for 21GW of dispatchable resources "in the form of utility-scale pumped hydro or battery storage, demand response such as demand-side participation, and distributed batteries participating as virtual power plants".

As with AEMO’s 2018 draft ISP, the priority facing Australia’s electricity sector was the need to invest heavily in the transmission network, with several interconnection projects highlighted (below). 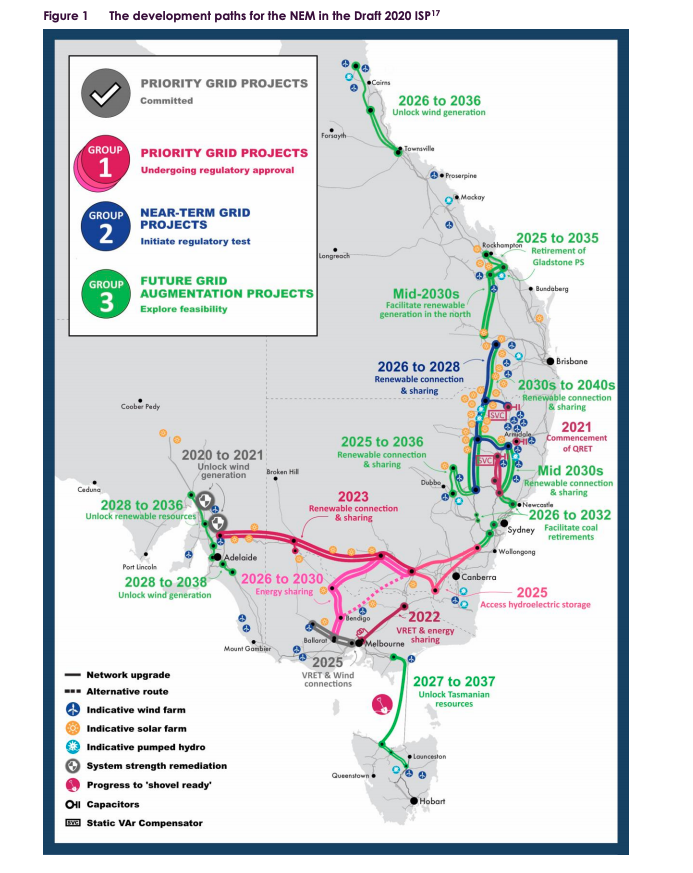 "The Draft 2020 ISP sets out how to build a least-cost system for Australia, but for consumers to receive the full benefit of the plan, important additional work on market design and infrastructure funding options need to be undertaken," said AEMO chief executive Audrey Zibelman.

According to the ISP’s central scenario of optimal development, AEMO predicted wind capacity in Australia to grow from 8.88GW in 2020-21 to over 20.7GW by 2040.

"We strongly support AEMO’s development path for extensive upgrades to the transmission grid to deliver the infrastructure needed to make the most of our vast clean energy resources, ensure the future stability and security of Australia’s energy system and deliver low-cost energy to consumers," said Kane Thornton, chief executive of lobby group the Clean Energy Council.

"As we have consistently said, a clear roadmap for transmission development is imperative in order to build investor confidence for new clean energy generation — which is urgently needed to ensure new generation is in place before our ageing coal power plants retire," Thornton added.