Nearly three quarters of the world’s wind-power capacity operating today was installed in the past ten years.

That 460GW of new build has seen wind power expand in all manner of new directions — reaching upwards to extract the most from low-wind regions, venturing into hot and cold climate extremes and remote locations, developing in deeper waters and farther out to sea offshore.

Wind-turbine technology has advanced at a remarkable rate in these ten years, but as this selection shows, there remains a role for apparently obsolescent sub-megawatt machines as well as the latest 5MW-plus hardware, depending on the site’s demands.

Three of the projects described here have some element of storage to back up their wind generation, a trend that will surely grow.

We can expect to see a growing number of wind and solar hybrids, batteries included, in the coming years. But these are the wind projects that made the biggest mark in the years from 2010 to 2019, presented in no particular order. 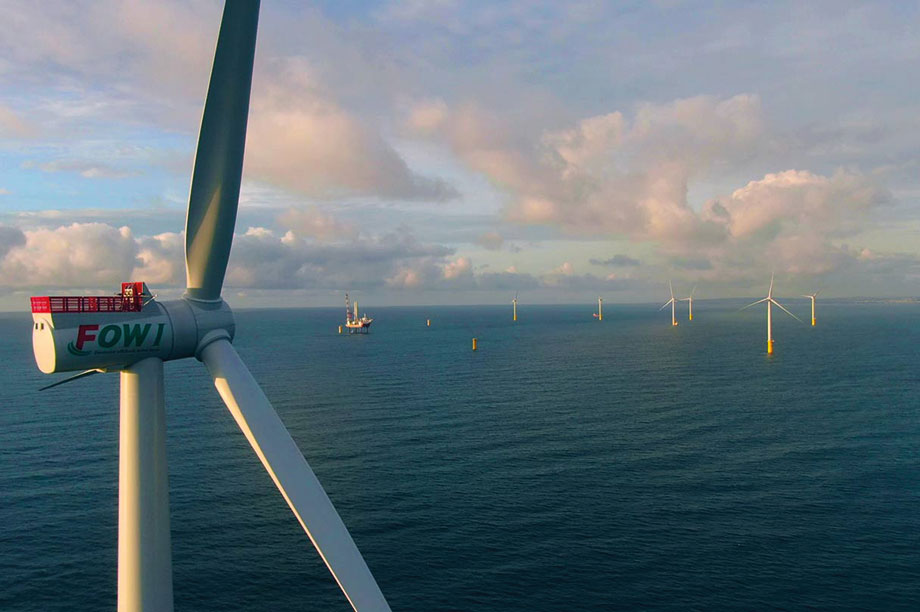 At the start of the decade, Taiwan barely registered as a potential offshore wind market in the Asia-Pacific region.

The smart money, beyond China, of course, was on the industrial giants of Japan and South Korea making the first big steps towards utility-scale offshore development.

But it is Taiwan that has taken the lead. And the 120MW Formosa project, officially inaugurated on 12 November, is the first step on the country’s ambitious plan to install 5.7GW of offshore wind capacity by 2025.

The foundations were laid with a two-turbine 8MW pilot project — using the well-tried Siemens Gamesa SWT-4.0-130 machine — commissioned in 2017. Work on a 20-turbine array, powered by 6MW direct-drive SGRE turbines, started shortly after.

The project had the backing of some blue-chip offshore developers, investors and suppliers, including Ørsted, the Macquarie Group, JDR Cable Systems and the Jan de Nul Group.

In technological terms, there is nothing particularly groundbreaking about Formosa 1. The turbines have been installed in shallow waters (15-30 metres), close to shore (6km), on conventional monopile foundations.

But wind, water and wave conditions in the Taiwan Straits are very different from those of the North and Baltic seas. Four typhoons hit the area during installation work. 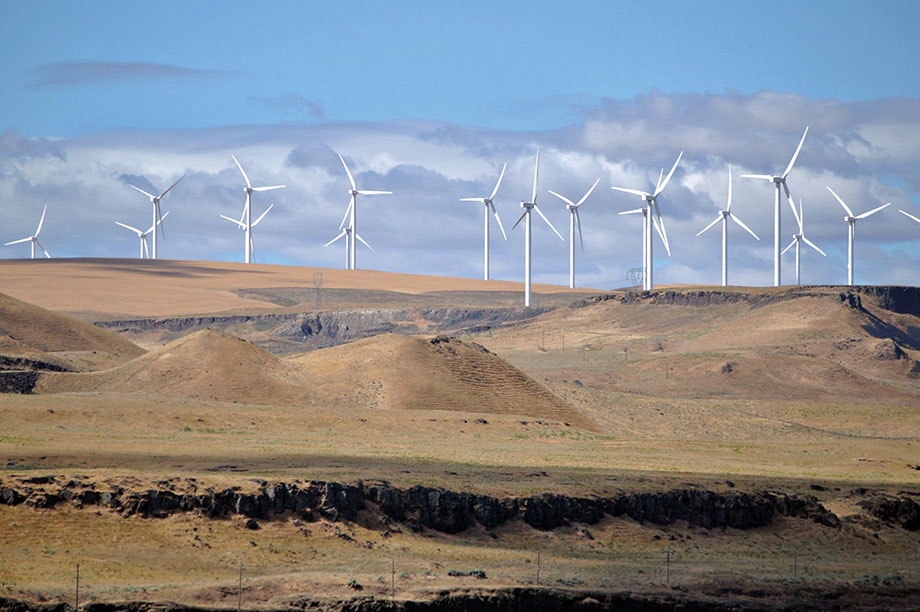 It still comes as something of a surprise that the US’s largest single onshore wind farm, the 845MW Shepherds Flat project, is not in Texas, Ohio or California, but in the north-western state of Oregon.

And that nothing bigger has been built since it was commissioned in 2012.

The technological specifications look fairly modest by today’s standards — 2.5MW turbines (GE), 100-metre rotor diameters, 85-metre hub heights — but they were at the leading edge of onshore wind development at the time.

The project broke new ground beyond its capacity and technological ambition, though. It was one of the first to be backed by Google, for example.

The new-tech giant now employs nearly 5,000 people at its facilities in Seattle, around 250km north-west of the wind farm.

Shepherds Flat also came with what, at the time, was an unusually long OEM service deal, with GE contracted to supply O&M facilities over ten years for the site’s 338 turbines. It set a trend that continues.

The electricity the project generates is taken by the Southern California Edison utility under a 20-year power purchase agreement. 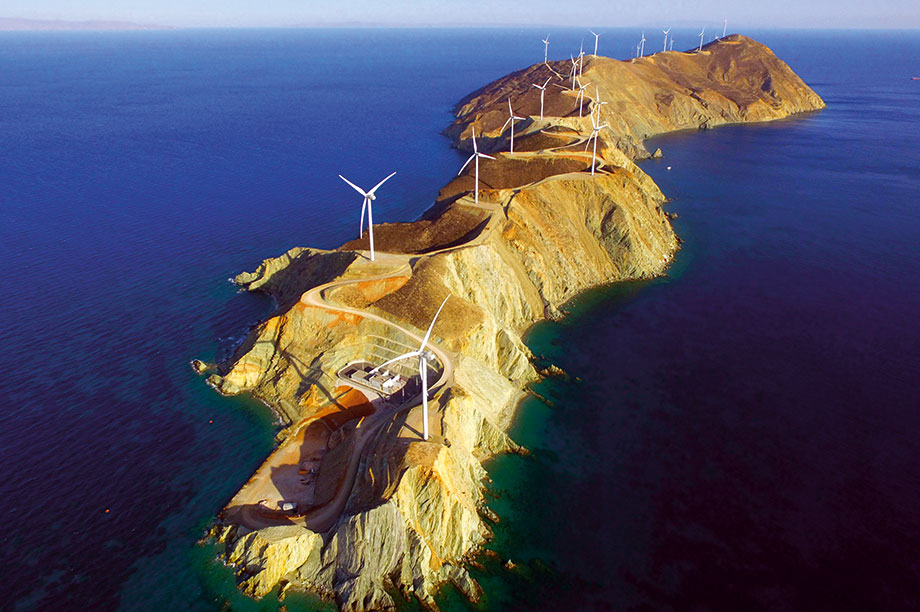 Wind-power technicians are pretty much the only human visitors to this uninhabited island in the Aegean Sea, 46km from the south coast of the Greek mainland.

But it is home to Greece’s largest wind farm, a €150-million, 23-turbine 73.2MW facility, connected via submarine cables to the mainland grid near Athens. It has been generating electricity since 2016.

The transport and installation logistics of the project were formidable. Seven different types of vessel were required to ship the major components to the port of Lavrio before transferring to local ferries. Delivery alone took five months.

The reward comes in the shape of excellent wind resources — an annual average of 8.4m/s from a predominantly northerly wind — which is good even by offshore standards.

Developer Terna Energy specified a combination of turbines from the well-proven Vestas 3MW platform, mixing up the high-wind V90-3.0MW models with the long-bladed, higher-rated, medium-wind V112-3.3MW machines, depending on their location on the ridge-backed island.

According to Terna, Agios Georgios produces enough electricity to power 40,000 households a year, around 250GWh. 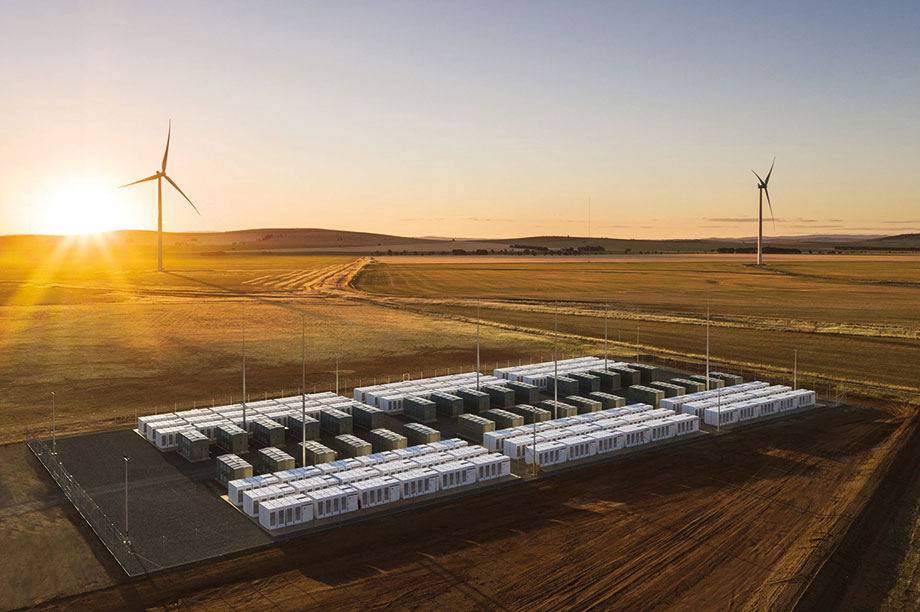 Work was well under way on French developer Neoen’s Hornsdale wind project in South Australia when the state was hit by a "one-in-50 years" electrical storm in April 2016 that knocked down 22 high-voltage pylons, triggering a cascade of automatic safety switch-offs and widespread blackouts.

While the federal government used this incident as another stick with which to beat renewables, Neoen responded by pressing ahead with construction of the wind farm while South Australia took up Elon Musk’s offer to install the world’s largest lithium-ion battery at the site — in just 100 days.

The 317MW project, powered by 99 3.2MW Siemens Gamesa turbines, plus the 100MW/129MWh Tesla Powerpack storage facility, were both up and running by the end of 2017, with the battery providing frequency response and ancillary services across south-east Australia.

A report by consultancy Aurecon, published after the first full year of operation at Hornsdale, said the battery had "delivered on the high expectations of its performance and market impact".

Neoen recently announced it will boost Hornsdale’s storage capacity by 50%, and it is developing a gigantic wind/solar/storage hybrid in South Australia, the first phase of which alone will combine 400MW of wind with 200MW of solar PV and 300MW of storage. 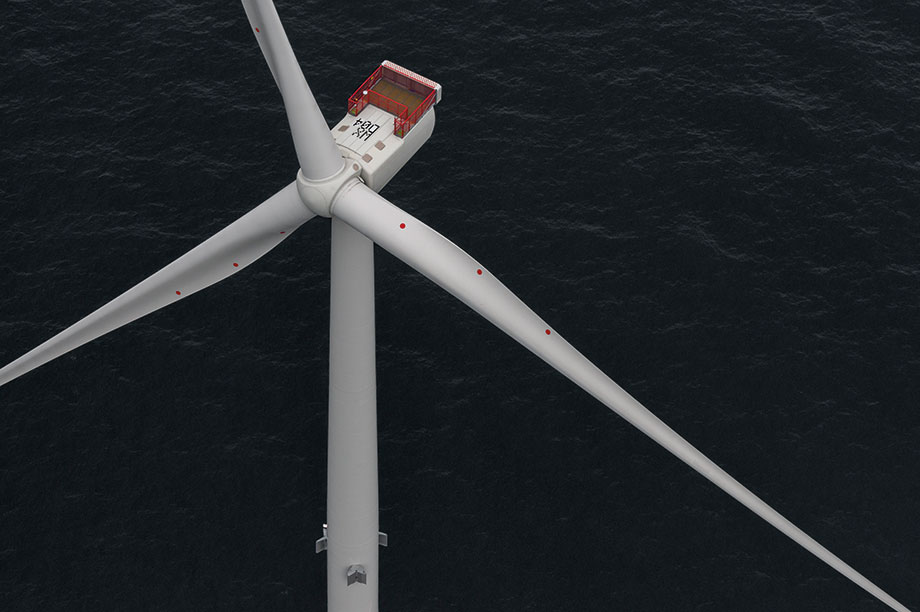 The size and scope of offshore wind grew dramatically over the decade, as a new generation of 6-10MW turbines came to the market, and developers built up their experience and know-how of operating in deeper waters and farther from shore.

The Ørsted-developed cluster of projects in the Irish Sea off England’s north-eastern coast illustrates the point. Walney 1 and 2 were completed in 2011 and 2012 respectively, each of 183.6MW in capacity from 3.6MW Siemens Gamesa turbines with 107-metre rotors.

Walney Extension is a distinct scale-up. The 329MW East portion is supplied by 7MW Siemens Gamesa turbines with 154-metre rotors.

Where Walney 1 and 2 required 102 turbines for a 376MW capacity total, Walney Extension only needs 87 units to reach 659MW.

Both arms of the extension were completed with impressive speed.

The first foundations were put in place in March 2017, and the last turbines installed just over a year later, with full commissioning following in the summer of 2018. 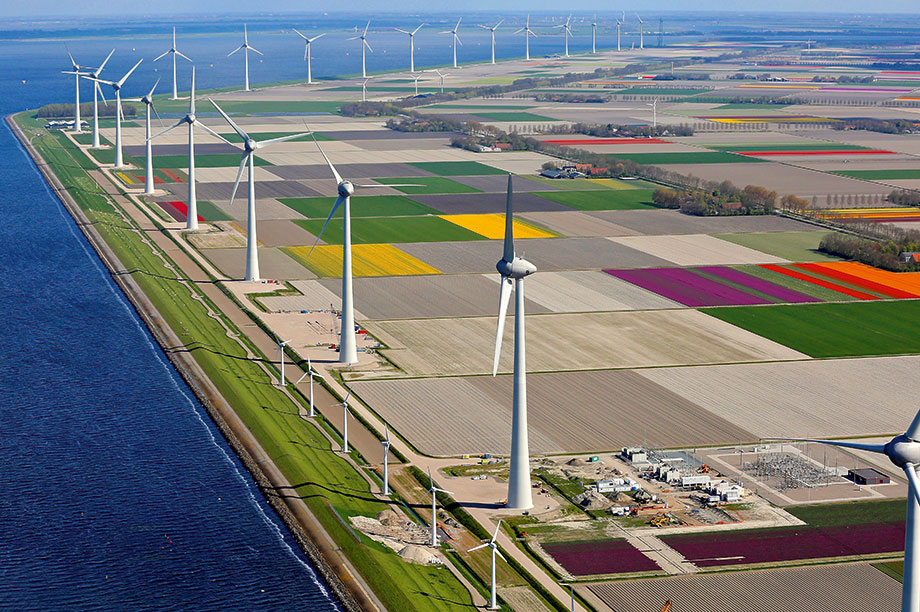 The defining repowering project of the decade (pic: Klass Eissens/RWE)

No one single photograph illustrates wind energy repowering better than this.

It shows the matchstick-like 300kW WindMaster turbines that had been operating since 1991 being towered over by the units that would soon replace them — 7.5MW Enercon turbines with rotor diameters of 127 metres and hub heights of 135 metres — still the highest-rated onshore turbines in operation today.

RWE achieved a sixfold increase in generating capacity at the site — from 15MW to 90MW — with fewer than a quarter of the number of turbines.

Part of the wider Noordoostpolder wind facilities in the region, the Zuidwester site on a man-made dyke demanded specially made foundations for the huge Enercon turbines.

The foundations themselves only go half a metre into the ground, with 60 concrete piles driven into the dyke to secure the base.

Repowering has been the subject of much more talk than action over the past decade, with the emphasis switching to life extension rather than replacement.

But Zuidwester shows what can be gained in capacity terms by ripping up and starting again. 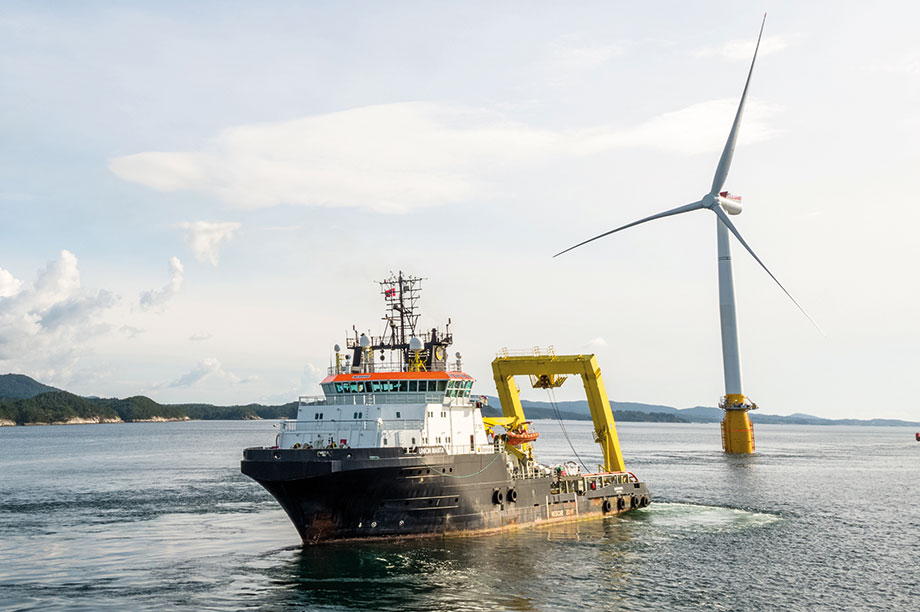 The pace of progress in floating offshore wind has not kept pace with the expectations formed in the early years of the past decade.

True, there are now a handful of pilot projects in operation, and several more in development, but Equinor’s Hywind Scotland project, commissioned in 2017, remains the world’s only floating array, with five 6MW direct-drive turbines installed on spar buoy platforms tethered to the sea bed.

The technology was developed from the lessons learned from Equinor’s (then still known as Statoil) prototype floater, installed in Norwegian waters with a 2.3MW Siemens Gamesa turbine in 2009.

That turbine is still operating today, though under new ownership.

The "battery with a brain", dubbed Batwind, is designed to "learn", through data input and digitalisation, when to store energy and when to supply it to the grid.

Equinor is pushing ahead with floating development. Its next project, Hywind Tampen, will have 11 8MW turbines providing power to its Snorre and Gullfaks oil and gas fields in the North Sea. 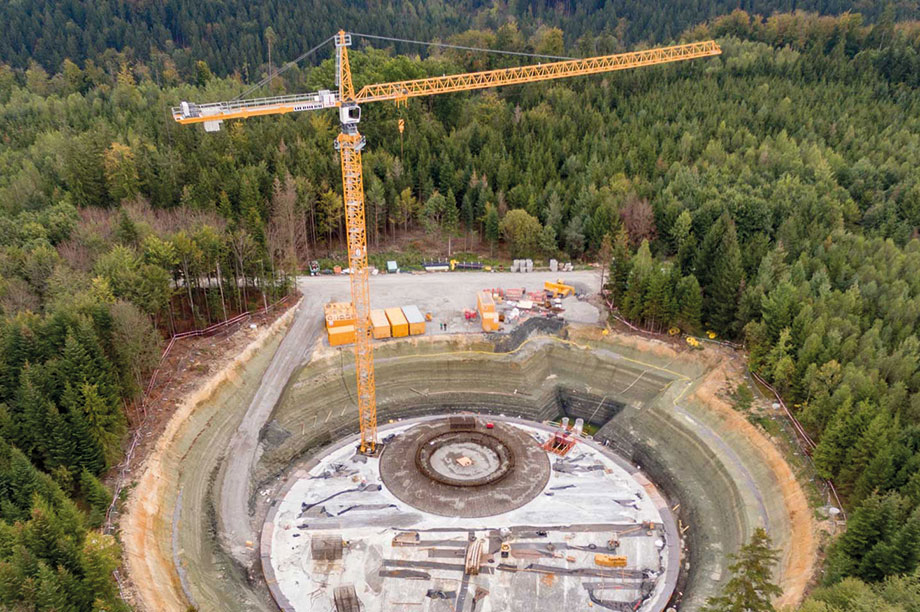 By our reckoning, these four GE machines at the "Naturstromspeicher" project in Gaildorf in southern Germany, remain the tallest onshore wind turbines in the world, with a tip height of 246.5metres.

Development in low-wind speed regions has spurred the advance of taller towers but the Max Bögl-designed structures for this project were aimed at more than achieving a greater hub height.

The 178-metre towers incorporate a 40-metre pumped-water storage mechanism at their base, with a lower reservoir, 200 metres below the turbines, in a nearby valley.

During times of peak demand and high electricity prices, the hydro plant is in production mode. When demand and prices are low, it switches to pump mode, storing water in the upper reservoir for later use.

According to GE, the 40-metre increase in hub height provides a boost of up to 25% in annual energy production from the 3.4MW turbines. 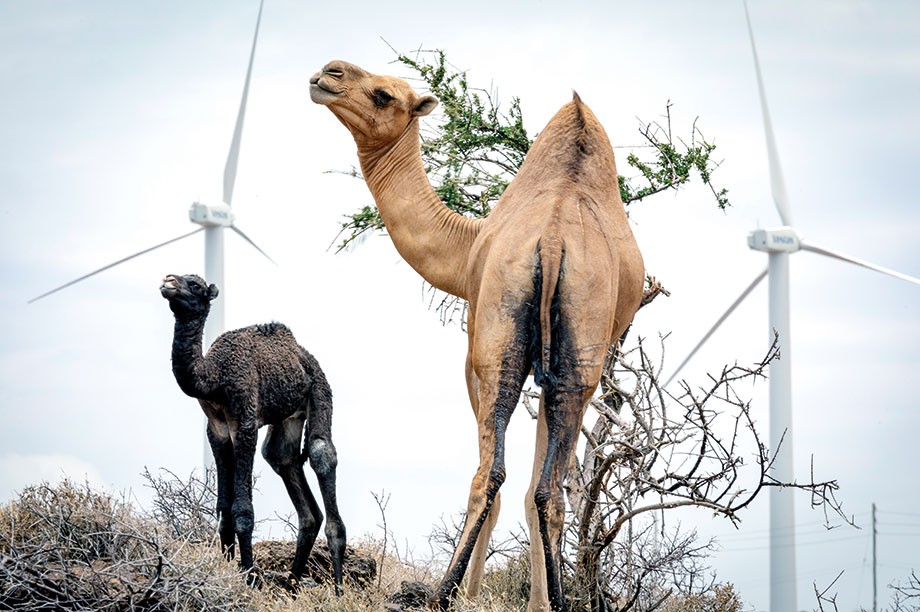 The gestation period was long to be sure — nearly 20 years elapsed between Carlo Van Wageningen’s brainchild of a wind farm near Lake Turkana, and the final commissioning of the 310MW project in Marsabit County, Kenya, in October 2018.

Africa’s largest single wind farm was a massively ambitious project. Located at an altitude of 2,300 metres, the project covers 162km2 of land in the Chalbi Desert.

Vestas played its part, resurrecting production of its V52-850kW turbine, sufficiently small and light to overcome the logistic challenges of the 1,200km journey from Port Mombasa to the project site.

Political instability and financial uncertainty were a constant backdrop. Even when the final turbine was installed, in June 2017, production was delayed until the completion of a transmission line in September 2018.

But an average capacity factor of 74% was recorded in the first week of generation. 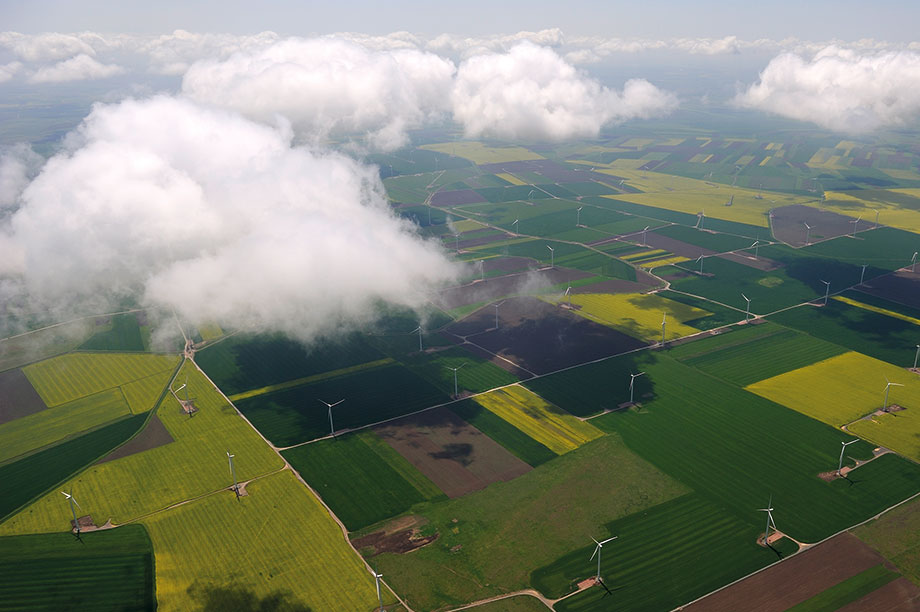 Few wind-industry analysts at the start of the decade would have predicted that this two-stage development near the Black Sea coast in Romania would still be Europe’s largest onshore wind farm seven years later.

Fantanele-Cogealac has much in common with Oregon’s Shepherds Flat — beyond the 2012 commissioning date and the use of GE’s well-proven 2.5xl/100 turbine.

More noteworthy is the fact that developers and OEMs in Europe and the US have largely steered clear of onshore developments on this scale since.

Fantanele-Cogealac marked the high point in wind-energy development in Romania, which in the first half of the decade was one of Europe’s hottest emerging markets.

Little of consequence has been built in the country since 2015, largely as a consequence of the fossil-fuel and nuclear-generating industries remaining in state hands and being first in the queue when it comes to support.

The project owner, Czech utility group CEZ, is now looking to offload the asset, a less-than-ringing endorsement of its profitability.