CSIC Haizhuang Windpower (CSIC HZwindpower) was set up in 2004 as a subsidiary of China Shipbuilding Industry Corporation (CSIC), a large state-owned industrial group.

CSIC HZwindpower is only a small player in offshore wind at present, with 152MW commissioned by November 2019, but it boasts some major milestones and has a measurable multi-megawatt-scale track record built from 2012, when it beat all local competitors by installing two offshore-dedicated 5MW high-speed geared H154-5.0MW prototypes, each with record 154-metre rotor diameter.

In the years that followed, this installed 5MW base was gradually expanded by another 24 units, and an enhanced 6.XMW prototype is planned before the year end or in early 2020 (see below).

The official product release coincided with the annual China Wind Power summit in October in Beijing, at which the turbine model received design certification from the China Electricity Science Research Institute (CESRI), a certification body of China State Grid Co.

It not only has the largest announced rotor in China but (likely) for any 10MW turbine introduced globally.

All are dwarfed by GE’s 12MW Haliade-X with its official 220-metre rotor.

"We are considering developing an uprated 12MW version in parallel, with an unchanged rotor diameter and the same mechanical layout for European and other international high-wind IEC I offshore markets," he says.

The first element appears to be a main shaft/main bearing unit in a common cast housing, bolted to a spaciously dimensioned cast main carrier. The additional main drive components are a two-stage planetary gearbox and a permanent magnet generator.

Another new model, with an 8MW rating, shares a comparable mechanical layout and drivetrain configuration, but with some different dimensions and main specifications.

Both the 8MW and 10MW models likely incorporate two power converters located along each of the nacelle sides behind the generator.

The MV-transformer is mounted inside as well, but at a 90-degree angle to the nacelle sides in front of the rear cover.

"When we started developing the 8MW product about two years ago, very few local suppliers were capable of producing the required main components," Lizhi recalls.

"Development of the larger 10MW turbine started later and had to happen faster to meet our target of installing both prototypes before the end of 2020.

"The single biggest challenge for our 10MW machine turned out to be sourcing the roughly 103-metre long blades, because international procurement would have been too expensive and therefore was not an option."

CSIC HZwindpower managed to find a local supplier capable of developing and producing a state-of-the-art blade made of advanced carbon and glass-reinforced epoxy composite.

"I could in this respect draw a parallel with the major supply-chain constraints we experienced when developing the 5MW H154-5.0 MW turbine in the 2010-11, including prototype assembly," Lizhi says.

"At that time there were hardly any local foundries capable of supplying the required hub castings, while today there is a wide choice in suppliers."

Gearbox input torque rating is comparable and well into the 13,000kNm-plus range.

The substantial input torque difference for these two above competing 10MW turbine models can be largely explained through two main contributing factors.

A common value is 90m/s for offshore wind, and among others pursued by MHI Vestas for the V164/V174 series and GE’s Haliade-X.

Second, to reduce the risk of leading-edge erosion damage, CSIC HZwindpower chose a rated tip speed below 90m/s, according to Lizhi, implying a further (relative) reduction in rotor speed.

The company plans to enter the floating offshore wind market as early as 2021 with two different floater solutions, both in combination with a 5MW turbine.

The first floating solution is a semi-sub, the second a compact spar-type, probably with reduced draught.

"With each of these technologies we’re aiming at water depths over 50 metres, such as off the south China coast," Lizhi concludes.

The H154-5.0 MW is a conventional offshore turbine concept with a head mass of around 600 tonnes. It incorporates a compact high-speed geared drivetrain with a single double-row roller-type rotor bearing, semi-integrated into a short hollow main shaft.

The latter is flanged to a conventional three-stage, CSIC-made gearbox with side torque supports, and the final main drivetrain element is a non-integrated permanent magnet generator (PMG). 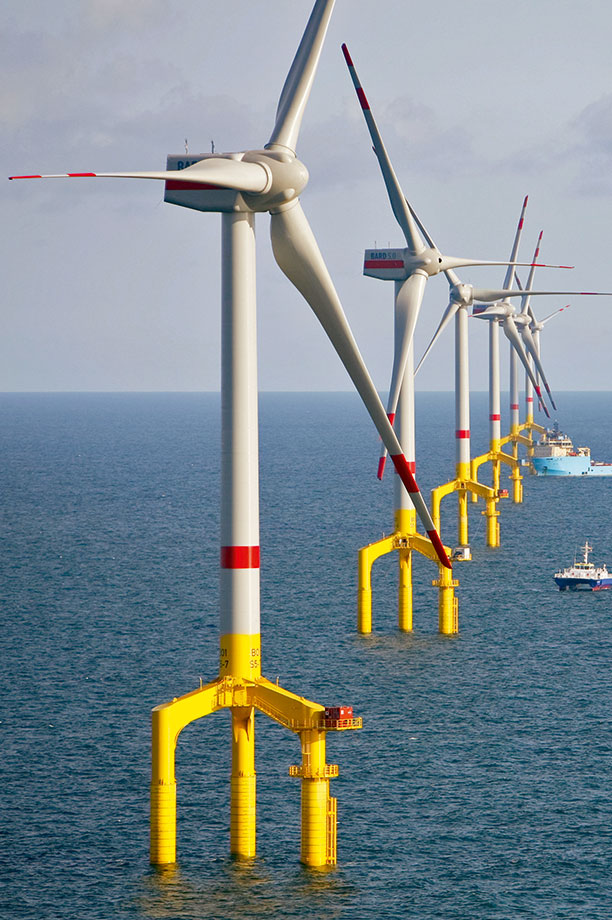 The drivetrain layout, except the choice of PMG, bears a close resemblance to now-defunct German firm Bard Engineering’s earlier 5MW Bard 5.0 offshore turbine design (right), which had a smaller rotor diameter of 122 metres.

The + stands for a built-in capability to survive extreme weather conditions such as those defined within IEC wind Class II (50m/s).

The firm made an evolutionary uprate of the proven 5.X MW drivetrain layout with the 6.X series, offering flexible 6.0-6.2MW rating.

In 2014, the firm commissioned ten much smaller 2MW H102-2.0 units with a 102-metre rotor diameter for IEC IIIA in the Longyuan Rudong inter-tidal wind farm, following a 2010 offshore prototype.

The 2MW series has a conventional non-integrated four-point drivetrain layout with a main shaft supported by two rotor bearings, and DFIG.

Lizhi explains that during its early years in the wind industry in 2004-06. CSIC HZwindpower lacked sufficient know-how to independently develop wind turbines.

It therefore teamed up with German engineering consultancy aerodyn energiesysteme to co-develop the 2MW turbine in multiple model variants for onshore and offshore, and with CSIC HZwindpower owning the full IP rights.

Another co-design cooperation was established with Dutch engineering consultancy Mecal for the H154-5.0 MW product development from 2010.