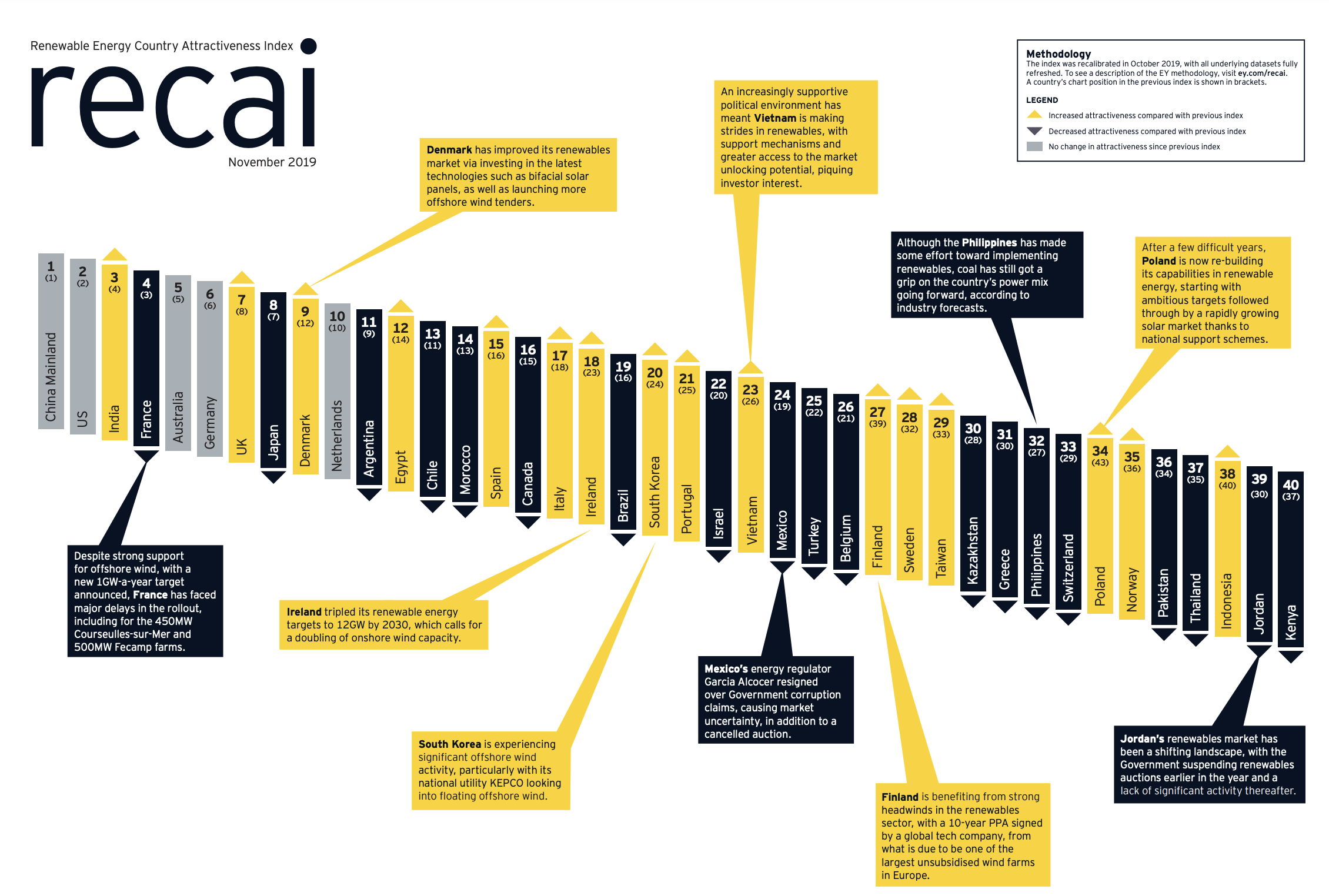 Twice a year, EY release its attractiveness index for global energy markets marking them on policy, pipeline and investment climate. In its report, it also breaks down each country's investment appeal by renewable energy technology.

Investors are taking more interest in South Korea, Taiwan and Poland, for example, all of which have risen in EY’s rankings since the index was last published in May.

Meanwhile, a 25GW pipeline of licenced wind farms in US waters means the country is the world’s most attractive offshore wind market, ahead of the UK, China, France and Germany, for investments according to EY.

It is also the joint most attractive market for onshore wind, alongside world leader China.

The US and China are followed by Finland, France and the UK in EY’s league table for onshore wind.

Elsewhere, recently announced tenders and boosted renewable energy targets have made some countries more attractive investment propositions, while project delays and political and regulatory uncertainty elsewhere have seen other markets fall down the league table.

Unveiling the latest Recai, EY's corporate finance leader for global power and utilities Ben Warren said an "emerging offshore wind sector in a number of markets" was the "most prominent" factor in the ranking.

The French government has boosted its ambition for offshore wind through its multiannual energy plan and now intends to award 1GW annually until 2028, up from 750MW.

However, investors should be wary, as offshore wind projects have faced significant delays in France, EY noted.

Accordingly, the advisors moved France down one space in their rankings to fourth overall. France is also ranked fourth for both onshore and offshore wind.

The market outlook for clean energy in Mexico has become more uncertain due to the country’s cancelled renewables auction in February 2019 and the head of the national energy regulator’s resignation over government corruption claims, EY stated.

It bumped Mexico five spaces down the overall rankings to 24th. Mexico is now 27th for onshore wind and 28th for offshore wind.

Denmark, meanwhile, plans to tender three offshore wind farms before 2023, and recently unveiled the support mechanism model for the first of this trio, the 1GW Thor project.

The advisors pushed Denmark three spaces up to ninth in its index. It is also placed 12th for onshore wind and sixth for offshore wind.

Plans for an additional 12GW of renewable energy capacity by 2030 — including 8.2GW of onshore wind — have made Ireland a more attractive investment destination, according to EY.

The advisors now rate Ireland 18th, up five spaces from May. Ireland is ranked 21st for onshore wind and 15th for offshore wind.

The government is also targetting 13GW of installed offshore wind by 2030.

EY ranked South Korea as the world’s 20th most attractive market for renewables, four spaces higher than six months ago. It is 40th for onshore wind but 13th for offshore wind.

Increased wind tariffs and plans to increase its onshore wind fleet from 326MW today to 6GW by 2030 make Vietnam a more attractive investment destination, according to EY.

The advisors boosted Vietnam up three places to 23rd. Vietnam is now 29th for onshore wind and 10th for offshore wind.

This has made Poland a more attractive market, according to EY, which pushed it up seven places to 34th. Poland is ranked 30th for onshore wind and 21st for offshore wind.

Biden plans to halve US emissions by 2030

The US president announced a new greenhouse gas emissions target during a meeting of world leaders, convened to discuss climate change

Concrete slip-forming of 11 spar foundations reached 20m at Aker Solutions' yard and will continue to 107.5m at a deep-water site