Germany's onshore wind industry had been a solid multi-gigawatt market for several years.

This was the main source of income for many of the country's domestic manufacturers, with firms like Enercon and Senvion relying on the market for the bulk of its activity.

But for 2019, the pickings have been slim. Current projections suggest Germany will struggle to reach 1GW of newly installed onshore wind capacity this year. 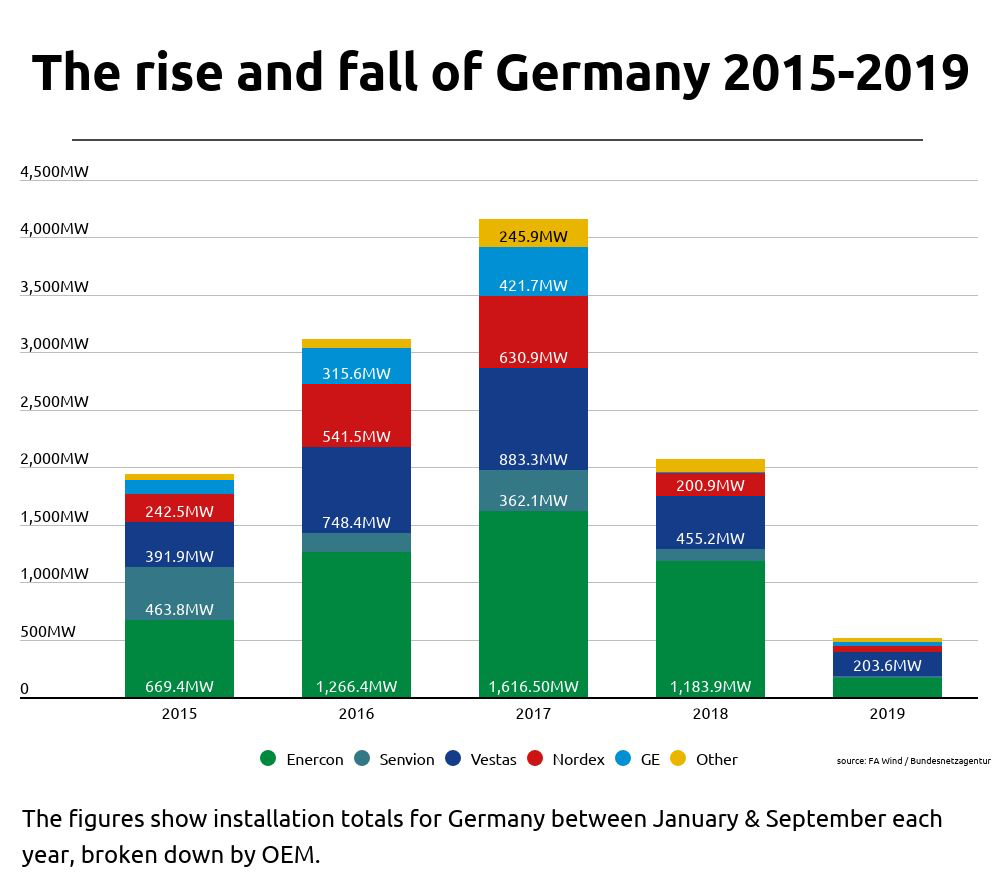 Across the first nine months of 2019, just 150 new turbines were installed, for a little over 510MW. It is the slowest rate of growth in Germany for 20 years.

Over the past five years, Germany has usually reached 500MW of newly installed capacity for the year by mid-March — it was late February in 2017. This year, it was not until late September that milestone was reached.

The downturn can be attributed to the number of citizen-owned projects that secured power deals in 2017.

These projects were able to secure contracts without having permits in place and longer lead times before needing to be online.

Onshore wind agency FA Wind said a number of projects were being held up by legal proceedings.

This means the project pipeline has dried up, leaving turbine OEMs to look elsewhere for business, with dire consequences for some. Senvion is in administration, selling off some of its European assets to rival Siemens Gamesa, for which Germany is a minor market.

Enercon, meanwhile, has launched a "transformation programme" of job cuts and factory closures as business in Germany can no longer sustain it as it once did.

Between 2016 and 2018, each year by the end of September, Enercon had installed well-over 1GW of new capacity. This year, that figure is 167MW.

Enercon has even lost its title as Germany's leading turbine supplier to Vestas so far in 2019, with the Danish manufacturer cornering a 39.6% share of what little market there is, compared to Enercon's 32.5% share.

And it does not look like its going to recover any time soon. The country's sedate permitting rate remains at a low level "without an upward trend foreseeable", according to the latest quarterly report from FA Wind.

Below we present our latest global capacity forecasts to 2028.