Wind and solar's global output is expected to increase three-fold by 2030 and five-fold to by 2040, under governments’ known policy intentions and stated targets, according to the International Energy Agency (IEA).

Their growth will help renewables overtake coal in the world’s generation mix in the mid-2020s, the IEA forecast

Within the power sector, there is likely to be a major shift in generation spending away from coal and towards renewables as well as towards upgrading networks and storage.

However, this shift will not be enough to meet the world’s climate targets, including limiting global warming to "well below" two degrees above pre-industrial levels, in line with the Paris Climate Agreement.

Speaking to the press, Laura Cozzi, the IEA’s chief energy modeller and co-lead author of the report, said the response from governments is "far from adequate to meet both energy security and environmental threats".

"This calls for a grand coalition of governments, investors, companies and everyone else committed to tackling climate change," she said.

In that scenario, annual investments to 2040 exceed $3.2 trillion — about 20% more than is currently forecast — including a "significant reallocation" of investments away from fossil fuels and towards renewable energy and other low-carbon technologies and other energy efficiency measures.

Renewables spending would need to nearly double from 2018 levels, investments in nuclear increase by almost 80% and spending on electricity grids and batteries also rise strongly to accommodate rising shares of wind and solar PV, the IEA suggested. 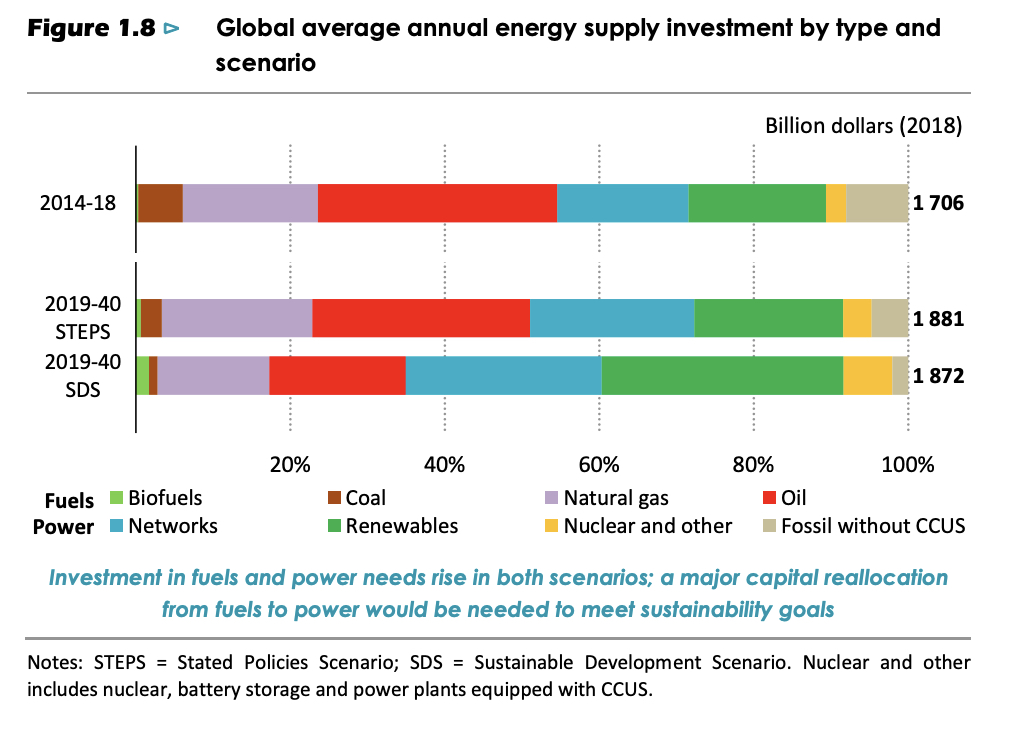 This would help generation from low-carbon technologies grow sixfold and provide nearly 85% of total output by 2040, while wind and solar PV generation would increase sevenfold over this period and provide 40% of global output.

While gas-fired power provides important balancing services — especially to meet seasonal variability in demand — its use would need to peak in the mid-2020s, the IEA stated.

Usage of battery storage and demand-side management would need to overtake gas and take on a larger role in meeting short-term flexibility needs.

They will also need to consider how market design and interaction between EVs and grid could benefit the shift to a cleaner energy system, the agency added.

Earlier this year, the IEA also published outlooks focusing on renewables — which forecast wind’s global fleet growing 62% by 2024 under current policies — and on offshore wind — which envisaged a 15-fold growth by 2040.