The Nanjing High Speed Gear Manufacturing Company (NGC) is one of the world’s leading wind-turbine gearbox suppliers. According to market-analysis manager Ji Qin’s introduction at one of the plants, it accounted for the single biggest share of global gearbox deliveries in 2018 in megawatt terms.

The company is focused firmly on gearboxes, but within an overall approach that recognises the integral part they play in turbine drivetrain technology, and the dedicated product and systems developments that ensue.

The emphasis NGC places on continuous product development and technology innovation is illustrated by the 493 patents it has been granted.

Technology innovation focuses on three main topics: journal bearings, design for reliability, and continuous development of customised solutions. Key to this is further expansion of the modular StanGear portfolio, introduced in 2016.

"StanGear involves gearboxes, but it has a wider emphasis on full drivetrain designs and is mainly geared towards large-scale onshore applications," says Qin. "The most important new platform for NGC is the 4.5MW high-speed gearbox introduced in 2017."

NGC entered commercial wind energy in 2006 with a high-speed gearbox for 1.5MW turbines, which was followed by a 2MW unit two years later. Both featured one planetary and two parallel stages. In 2008 it also introduced 2.5MW- and 3MW-class gearboxes, now with two planetary and one parallel stage. An enhanced 3.6MW gearbox with a similar mechanical layout to the 2.5MW and 3.0MW platforms followed in 2009.

"These initial platforms formed the commercial basis of today’s comprehensive product portfolio," says Qin. "Around 65,000 units are in operation worldwide, adding to a cumulative installed base exceeding 112GW."

A distinct product development line outside its regular gearbox portfolio are 2MW, 3MW and 5MW medium-speed gearboxes for an unnamed turbine manufacturer.

Another unusual product line is the manufacture of medium-speed gearboxes for Mingyang Smart Energy’s 5.5MW and 7.25MW turbines. These models feature a highly compact externally designed drivetrain (see below).

Production of the new StanGear portfolio is now taking up a much greater share of the company’s total gearbox output, growing from 25% of all shipments in 2017 to 47% last year, and an anticipated 60% this year.

They explain that the background for introducing StanGear was a 2015 in-house global wind-market analysis that indicated around 500 different existing turbine types in use, of which 80% used gearboxes.

Managing the demands of a wide diversity of turbine designs and fleets is a major challenge for the industry, they explain.

The cost competition from other electricity-generating sources, especially solar, is another huge factor in driving down the lifecycle costs for owners and operators and wind energy’s overall levelised cost of energy (LCoE).

Larger volumes, product-scaling effects, shorter time-to-market of new designs, and higher reliability of critical components are the means to achieving this, they argue.

There are currently 21 standardised main gearbox (SMG) platforms within StanGear, each with a given rated input torque (or range) and subdivided into four or five sub-platform variants.

The latest and largest addition is the SMG38 platform for up-to 7MW, which is currently undergoing trials at one of NGC’s 14 back-to-back test benches before commercial market release. The SMG38 has been developed mainly for onshore applications and rotor diameters of 151-171 metres.

Even more powerful SMG platforms for up to 8,000kNm rated input torque range are in development. Within each platform variant, the planetary stage or stages are modular with standardised gear parameters, but have variations in gear length.

"NGC’s overall gearbox development focus is reliability driven, which is shown, for instance, in the spacious, over-three-metre outer diameter of the ring gear of our latest and largest gearbox in development," says Jianxin.

"For most of the gearbox platforms we normally deploy four planets in the low-speed stage, and typically three in the medium-speed stage.

All NGC gearboxes are equipped with roller bearings, which enables a torque density of 125-150Nm/kg to be achieved, according to the experts.

However, about a year ago NGC started testing a prototype gearbox incorporating journal bearings in all positions except the planet carrier.

"This prototype gearbox with journal bearings was fitted in a 2.5MW turbine for one specific turbine manufacturer," says Jianxin.

"But we recently expanded the trial with another nine turbines. Above all, we decided on a careful step-by-step journal bearing development and market introduction process."

An R&D project of this scale involves intensive investigation, followed by verification and validation testing.

NGC prides itself on being the only gearbox supplier that since 2007 has continuously deployed and optimised induction hardening for the large and crucial ring gear of the low-speed planetary stage, a technology also known as induced surface hardening. 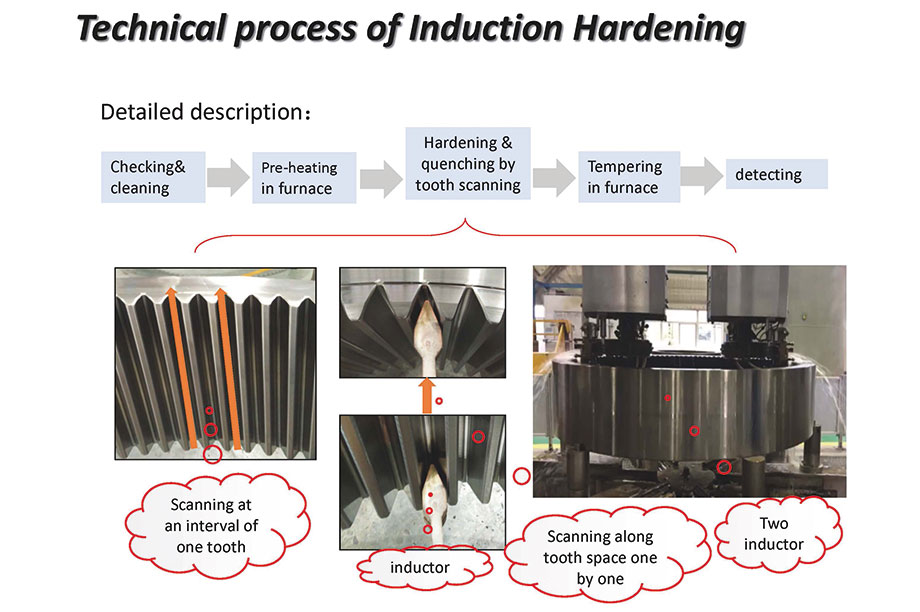 "The technology has been used for ratings from 800kW to 7MW, and with a maximum outer ring gear diameter of 3.42 metres," says Yi Liang, who heads NGC’s gear and shaft hardening activities, and is responsible for the four induction-hardening machines inside the company’s largest plant.

"Most importantly, our clients are very satisfied."

He continues: "So far, we have no competitors for our ring-gear induction hardening technology. They prefer nitriding. NGC had produced more than 52,000 induction-hardened ring gears by end of 2018, and our annual output capacity has now reached 8,500 units."

However, NGC does use a nitriding-hardening process for the smaller medium-speed planetary stages, unless these become very large in future.

Another common heat-treatment practice for steel-component surface hardening is carburising, which NGC uses for the planet gears, gear shafts and planetary-stage sun wheels.

"The main difference between the two heat treatment methods is that with nitriding, nitrogen atoms are made to diffuse into the surface of the parts being processed, whereas carburising uses carbon," says Liang.

"But induction hardening offers distinct benefits over both — it’s an easier process, there is less distortion and deformation due to only localised heating, and you achieve a uniform hardness profile."

NGC has made it a top priority to promote its pioneering role and progress in ring-gear induction hardening.

"This is a message we’d like to make wider known in the field and with our global clients," says Yiang.

The environmental benefits of the process led to NGC entering a strategic cooperation with a "prestigious university", which Laing believes will do much to advance the technology and help NGC stand out as a sustainable market leader.

The diameter of these are substantially bigger than those of an equivalent size conventional gearbox, and each carrier has five planets instead of a more common four for this rating.

It is also a "flex-pin" type design for ensuring optimal gear-tooth contact between matching gear pairs aimed at minimising the impact of unavoidable deformations under load in such large-scale components.

The compact three-bladed upwind turbine models in which they are deployed are characterised by a semi-integrated drivetrain with flanged connections between gearbox, plus an integrated single-rotor bearing and a permanent magnet generator.

These main components, plus the rotor assembly, are in turn flanged directly to the main carrier, so there is no requirement for a separate nacelle for drivetrain mounting.

Former SCD-licensee Mingyang acquired the technology and associated intellectual property in 2016 for deployment in China and, on a case-to-case project basis, in international projects as "a compact semi-integrated drivetrain solution".

NGC currently makes two different gearboxes for Mingyang. The smaller is in serial production for a 5.5MW turbine with a 155-metre rotor (MySE5.5-155), picture below. 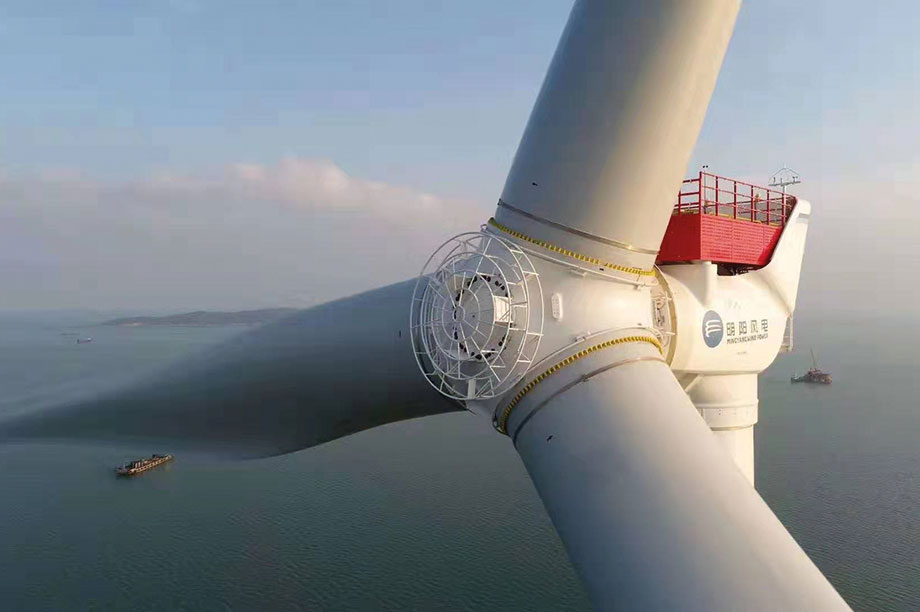 The larger units are intended for a 7.25MW unit with a 158-metre rotor (MySE7.25-158), a prototype of which has been operating since February.

The fully assembled two-stage planetary gearboxes with their unusual large diameter and integrated rotor bearing are surprisingly short. As they are an integral part of a semi-integrated drivetrain concept, NGC specialists had to develop special adapter pieces for both the input and output sides to allow bench-testing of ready units — at up to 120% of rated loads, cold-temperature starts and heating-up procedures.

NGC established its Gearbox Offshore Technology (GOT) project team in June 2017 with the aim of designing units for a 25-year operating lifetime, improving reliability, and cutting maintenance time and costs.

These technical demands pose additional cost pressures on gearbox design. But in a forum presentation on the design and development of offshore wind gearboxes, 14 different NGC designs were listed, rating from 3.1-10MW. All those above 5MW have a design life of over 25 years.

The few other specifications listed in the overview include a rated rotor speed that could correspond to a modest offshore turbine rating with matching 210 – 215-metre rotor size.

This fits into the trend for the latest and largest Chinese onshore and offshore model developments: to fit larger and slower-turning rotors for a given power rating compared to European high-wind turbine designs.