Clear and ambitious national plans, improved permitting arrangements and continuing investment in new grid infrastructure could help facilitate 88GW of new wind power capacity being installed by 2023, according to WindEurope.

This would bring Europe’s cumulative installed capacity to 277GW.

It added that "super ambitious" NECPs and a "significant" improvement in permitting processes across Europe could lead to 112GW of new wind farms being added over the next five years.

Under the ‘high scenario’ in WindEurope’s Wind Energy Outlook to 2023 report, there would be a total of 301GW installed in Europe by 2023.

By contrast, unambitious NECPs — in which European Union (EU) member states set out their climate and energy objectives — and persisting permitting issues could mean just 67GW of new capacity is added in the next five years, under the ‘low scenario’.

This would bring Europe’s cumulative capacity to 256GW. Europe's annual installations could be anywhere between 13GW and 22GW through to 2023. 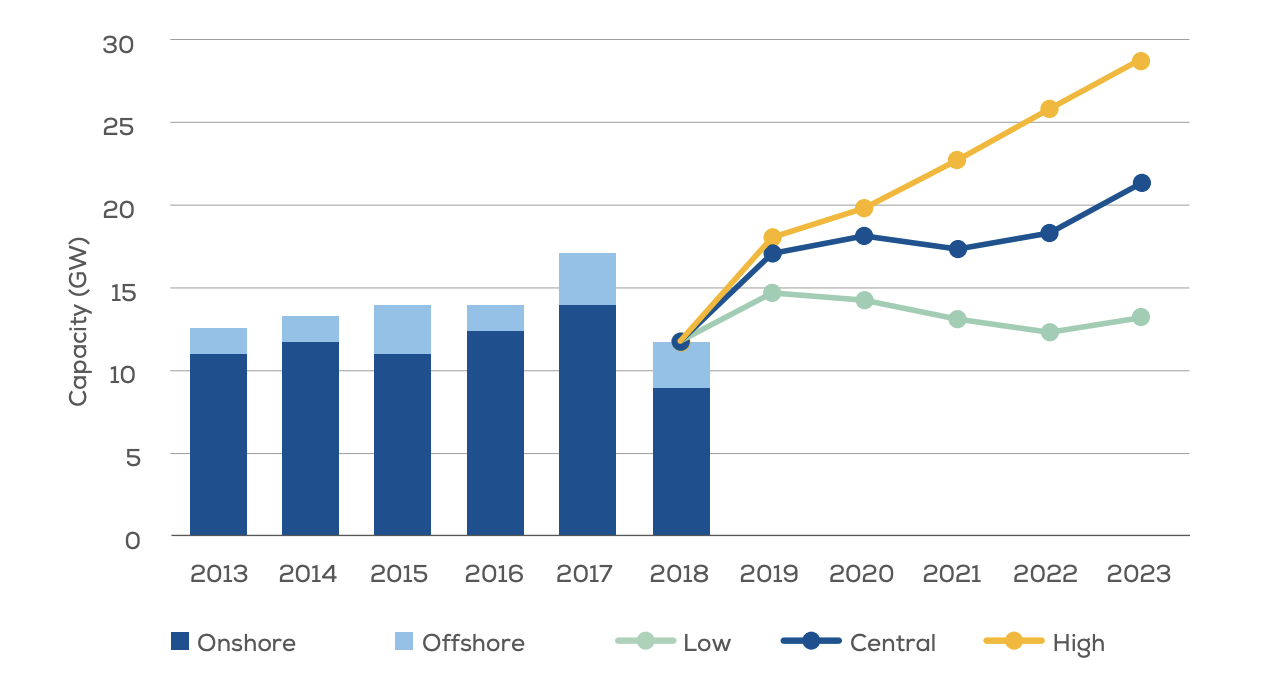 It noted that recent tenders in Germany, France and Greece have been undersubscribed, for example.

WindEurope added there is also a lack of policy frameworks supporting repowering of the 22GW of capacity reaching the end of its 20-year operational life by 2023.

Its CEO Giles Dickson warned that unambitious NECPs and policy frameworks would mean Europe would miss the EU's target of sourcing 32% of its energy from renewables by 2030.

"Wind energy should be growing rapidly when you consider all the interest in climate change plus the fact the wind is the cheapest form of new power energy production.

"But there is real uncertainty about how far it’s going to expand in the next five years," he said.

In all of the five-year outlook’s scenarios, onshore wind accounts for more than three quarters of new installations.

Under its ‘central scenario’, growth is expected to be especially strong in Spain (8.7GW), Sweden (7.5GW) and Norway (3.5GW). European leader Germany would add 12.3GW to its existing fleet of 59.3GW.

The UK is expected to add a Europe-leading 6.4GW of new offshore capacity by 2023, ahead of the Netherlands (4GW) and Germany (2.9GW).

Dickson said clear policies could also help save jobs, and claimed that policy issues played a "large part" in the 35,000 wind power industry jobs lost in Germany over the last four years.

"The European Green Deal needs to include a clear industrial policy for Europe’s low-carbon industries: supporting the success stories we’ve established, ensuring we can continue to trade with the rest of the world, and driving continued innovation to stay competitive," he said.

Major manufacturers Senvion, SGRE and Vestas have announced job cuts in Europe in the last weeks.