An eight-fold increase in wind and solar PV capacity could help ensure this threshold is not broken — as long as it is accompanied by improved energy efficiency and wider use of carbon capture, utilisation and storage (CCUS), according to DNV GL’s latest Energy Transition Outlook report.

This roll-out of renewables would include a five-fold increase in wind power to 3TW and more than a ten-fold rise in solar PV to 5TW by 2050.

It would also require the deployment of smarter grids and ultra-high-voltage transmission lines to balance variable power sources.

Deploying this technology will become increasingly cheaper and will not require major new technological advances, but on its own, the growth will not be sufficient to meet the goals of the Paris Climate Agreement, DNV GL said.

Improving global energy efficiency and deplopying CCUS on an industrial-scale will also be needed.

"Plunging" prices of renewable energy will enable investments to go further than before, the analysts forecast.

The world currently spends 3.6% of global GDP on energy, but by mid-century spending 1.9% of worldwide GDP on energy could help fund the energy transition.

The technology needed to help limit global warming to below 2C above industrial levels, in accordance with the Paris Climate Agreement, already exists, DNV GL found.

However, the energy transition is not taking place fast enough.

DNV GL forecasts the world’s carbon budget for limiting global warming to 1.5C above industrial levels will be spent as early as 2028, and predict the world will be 2.4C warmer by the end of this century than it was in the immediate pre-industrial period.

Ditlev Engel, CEO of DNV GL’s energy unit, said: "Our research shows that technology has the power to close the emissions gap and create a clean energy future.

"But time is against us. Those technology measures can only be successful if they are supported by extraordinary policy action.

"We are calling for government policies to expand and adapt power grids to accommodate the rise of renewables, economic stimulus for energy efficiency measures and regulatory reform to accelerate the electrification of transport."

By 2050, 5TW of solar PV (up from about 500GW today) and 3TW of wind power (up from about 600GW) could produce about 36,000TWh per year — more than a 20-fold increase from current output and enough to meet around half of global annual electricity use.

Wind, solar PV, and other renewable energy sources are also on track to meet about 80% of the world’s electricity needs by mid-century, DNV GL forecast.

The influx of variable generation capacity will require investments in technology capable of storing excess electricity.

In total, more than $1.5 trillion of annual investment will be needed to expand and reinforce power grids by 2030, the analysts said.

This will include deployment of ultra-high-voltage transmission networks and demand-response solutions to balance variable generation.

Increasing electrification will be crucial to expanding the use of renewables, the report stated.

DNV GL forecast electricity’s share of energy use doubling from about 19% today to 40% by 2050 with the greater use of heat pumps, electric arc furnaces and an increasing use of electric vehicles (EVs).

The analysts predicted 50% of all new cars sold in 2032 will be EVs, necessitating huge investments in new infrastructure to facilitate large-scale charging. 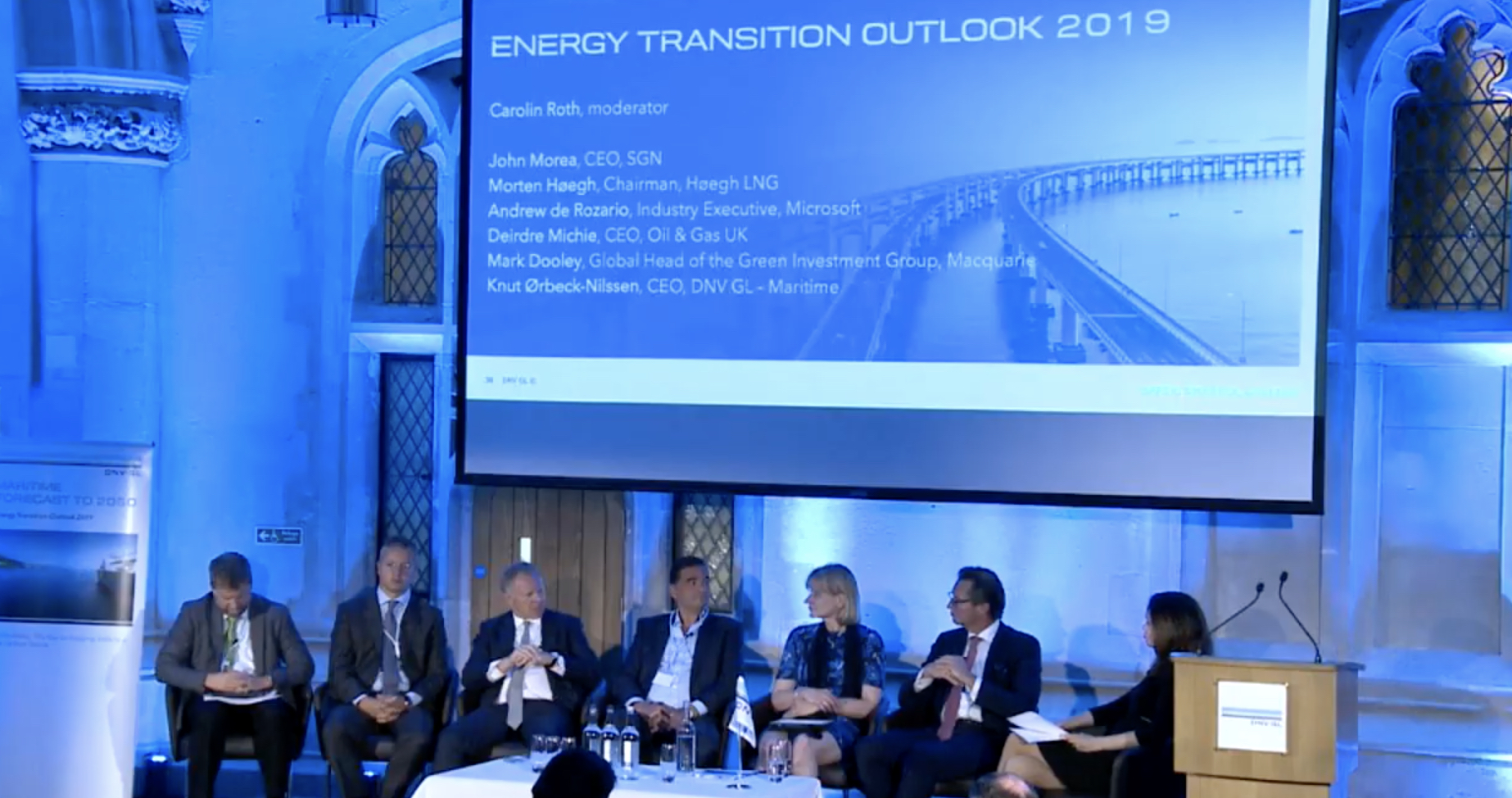 At a launch event for the report in London (above), the global head of Macquarie’s Green Investment Group, Mark Dooley, suggested hydrogen production from excess renewables could encourage investors.

"There are times when the wind is blowing everywhere and you get paid not to produce," he explained.

"But if you do your hydrogen from that renewable power that nobody wants, these little things at the margins can be intelligently managed by an investor and intelligently transform the economics of hydrogen.

"We need to harness that."

The analysts suggested reducing energy intensity — units of energy per units of GDP — by 3.5% per year over the next decade.

This will require accelerated energy efficiency improvements from the the average 1.6% annual reduction over the last two decades, DNV GL said.

DNV GL also called for a "rapid and wide deployment" of CCUS on an industrial-scale. However, it described CCUS as a technology that has "yet to play any transformational role".

Remi Eriksen, CEO of DNV GL Group, told the audience at the launch event: "We are moving to an energy system very different from what we know today. This is only within the space of a generation.

"This transition is certainly a source of risk (for investors), but a cleaner, more efficient energy system opens up opportunities both for businesses today and for generations to come."