Peter Lutz, founder and CEO of Adion Technologies, starts by highlighting the wind-industry trend for turbine ratings and rotor sizes — onshore and offshore — to continuously increase, bringing with it a number of technology-related challenges.

A key characteristic of Adion’s modular two-stage distributed gearboxes is that the rotor torque fed into a large-diameter gear is redistributed into two separate load streams within a single module.

The total module number equals the generator numbers (1, 2 or 4), which are matched to turbines with rated power of up to 4MW, 8-10MW and up to 20MW.

The 4MW gearbox version incorporates a single module, while the 8MW version is made up of two identical modules, plus all the required structural and other enhancements, such as enlarging and strengthening the gearbox housing.

The differences between the 8MW and 20MW hybrid gearbox variants are greater and include a bigger central gear, a switch from two to four generators, and the use of wider carbon-fibre belts.

The load-stream approach starts with the first module stage consisting of two separate interspaced pinions at the driving central gear, an arrangement that halves incoming torque per pinion, Lutz explains.

"The first gear stage and first load stream offer a step-up ratio of around 1:10," he says.

"Each of these individual pinions is linked to a 1.6-metre diameter toothed-belt wheel at the same shaft, and these two large wheels together become the driving part of the second gearbox stage.

"The matching carbon-fibre toothed belts drive two small tooth-belt wheels, both fitted at a same gearbox output shaft with a step-up ratio of about 1:4, which, in a final step, feeds power into the matching generator," Lutz adds.

The use of belt drives in wind-turbine drivetrains is not new (see box).

However, the application of high-performance carbon-fibre toothed belts in multi-megawatt gearboxes for onshore and offshore use is new and innovative.

"This toothed-belt technology has advanced a lot in the past year, and Continental expects that 30,000-50,000 operating hours should be feasible in our specific application," says Lutz.

"Similar lifetime performance is achieved in high-impact heavy-duty industrial uses, such as stone crushers and shredders.

"The key material properties include: one-piece, so no seam; constant length retention throughout the belt’s service life; resistance to salty air and high humidity, ageing and ozone, and oils and greases. They also offer a -55ºC to +80ºC operating range.

"These properties make the belts ideal for onshore and offshore use in all relevant climate zones of the world," he adds.

An in-house drivetrain comparison between an Adion 8MW hybrid gearbox and a similarly rated state-of-the-art commercial medium-speed gearbox indicates a 47% reduction in mass and half the number of rotating components, which helps to lower Capex, Opex and, ultimately, lifecycle-based levelised cost of energy.

"It’s important to note that our hybrid solution contains a considerable share of inexpensive unprocessed steel, which substantially contributes to a favourable unit cost price.

"Our modular design approach enables up-tower repairs and the easy exchange of all main components, including the belts. Risk reduction is an essential part of our design approach and to achieve market acceptance for this technology," says Lutz.

He cites four key factors in support of his optimism for the firm’s product development strategy.

And fourth and final, an overall focus on reducing loads and minimising lifecycle costs.

One infamous recurring issue with mechanical distributed drivetrains incorporating multiple generators is that individual units do not automatically generate the same power during operation.

In 2006, Clipper claimed it had put in much effort to synchronise the loads between the individual generators, and that advanced power output control algorithms kept the maximum load deviation level at 4%. The US firm ceased manufacture in 2012.

Lutz is familiar with the load-synchronising issues on distributed gearboxes, but does not believe it will be a problem with Adion’s hybrid units.

"The generator and power electronics senior expert in our core team had an in-depth look at this specific issue," he says.

"He concluded that our solution is fully capable of achieving a virtually similar output for all individual load-streams and matching generators.

"Turbine and generator control technology has made giant strides since 2006. And the belt drives in our hybrid gearboxes offer some inherent built-in flexibility compared to conventional full-mechanical rigid equivalents."

Lutz turns to the topic of the overall efficiency of Adion’s hybrid gearbox against the conventional medium-speed equivalent.

A maximum 2% rated efficiency loss in modern two-stage planetary gearboxes is considered a realistic figure in the wind industry.

Adion’s calculations suggest comparable outcomes, 1% in the low-speed parallel-gear stage, and 1% for the belt drive.

"But we will make further efficiency gains because our lubrication system can be smaller and less complex. Also, the temperature in the gearbox is easier to manage and ramping up cold-temperature operation is much quicker," says Lutz.

Each of these hybrid gearboxes could fit into common non-integrated drivetrain configurations with either three-point (single rotor bearing) rotor support, or four-point with two bearings, or alternative semi-integrated layouts.

The next scaling-up step to 20MW is at an earlier stage of development, but the total energy flow of this hybrid gearbox is again split into two load streams per module.

"We will be ready if the wind industry asks for it," says Lutz.

"The development status is that a fully calculated hybrid gearbox design is ready, and patents application filing is completed. Responses from our patent attorney and talks with potential clients have been very encouraging, and we are positive that a first patent could be granted in 2020.

"The next step is finding an investor for a full-scale 4MW prototype, then building, testing and validating it.

"Because we are a specialised technology developer, our future goal is selling either non-exclusive intellectual property licences or full IP rights to interested third parties like OEMs and component suppliers worldwide," he says.

Belt drives are known as uncomplicated drive elements deployed in many applications, from heavy-duty industrial and agricultural machinery, to household appliances like washing machines, to car engines and motorcycles.

A well-known example in the latter category is the latest generation of toothed belts used in some Harley Davidson and BMW motorbikes, as an alternative to the traditional chain drive between the gearbox and rear wheel.

An early traditional V-belt wind-turbine application was the first 33kW Vestas V10 prototype of 1979. This operated for two decades in western Jutland, Denmark, before being taken down, still in running condition.

The straightforward hybrid drivetrain combined an agricultural gearbox and V-belt driving the generator, which is far less efficient and limited to low power ratings. 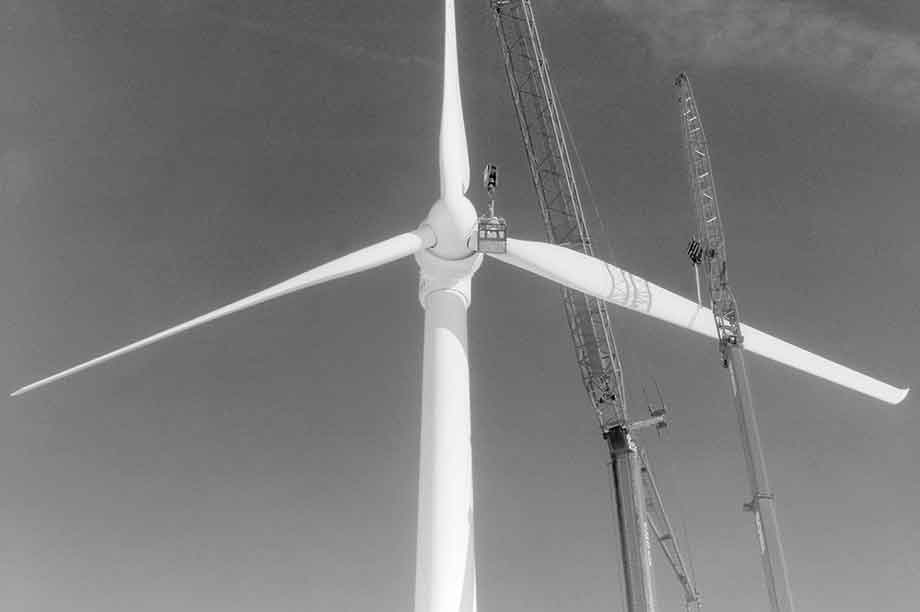 A more recent toothed-belt application is in wind-turbine pitch systems. This innovative and virtually maintenance-free solution, developed by emeritus professor Friedrich Klinger, was first incorporated in a direct-drive 600kW Genesys prototype in 1997, and in later commercial Vensys (Goldwind) turbines.