In 2009, France passed a law calling for its overseas territories to be self-sufficient in meeting their energy needs by 2030. Most of these territories are islands, constrained by small and isolated grids and heavily dependent on fossil fuels.

While achieving energy autonomy is a major challenge for these "non-interconnected zones (ZNI), it is perfectly possible, and would save money in the long run, according to a recent study by the French environment and energy management agency, Ademe.

Among other things it will require a significant increase in the share of wind and other renewables in the energy mix, alongside adequate storage capacity, grid upgrades, more sophisticated grid management, increased energy efficiency, and fewer regulatory constraints, Ademe found.

Concerted effort will be required to make these things happen. "It is essential that all the political, administrative and economic forces of these territories are mobilised," noted renewable-energy trade body SER.

The ZNI include Corsica in the Mediterranean, la Réunion and Mayotte in the Indian Ocean, Guadeloupe and Martinique in the Caribbean, St-Pierre et Miquelon in the north Atlantic, and Guyane in South America.

New Caledonia in the south-west Pacific is not technically a ZNI but faces many of the same challenges.

The first grid-connected wind turbines installed on a ZNI were 12 Vergnet two-bladed 12kW machines on Guadeloupe’s La Désirade island in 1992, according to Jérome Billery, president of SER’s overseas regions commission.

Then, in the late 1990s, the government launched a series of competitive tenders under the Eole-2005 programme.

This saw a number of small wind projects built, including Aerowatt’s Morne Constant and Fonds Caraïbes facilities in Gaudeloupe, and the first phases of its La Pérriere project in La Réunion, plus Siif Energies’ Ersa-Rogliano wind farm in Corsica.

The framework changed again following the Grenelle Law in 2009. To comply with the law’s 2030 energy autonomy target mentioned above, a new tender system was introduced.

Winners were eligible to sign 20-year power purchase agreements (PPAs), but had to be equipped with forecasting capabilities and storage to avoid compromising the ZNI’s weak and isolated grids.

At the time, the maximum share of renewables allowed on to the grid was 30%.

Ultimately, only one tender was held in 2010, and, of the nine projects awarded, only one was built: Le Souffleur on la Désirade, which repowered the earlier facility.

A few Aerowatt projects were modified and built later under the 2013 tariff.

The lack of success was partly due to "too few projects, few bidders and a total lack of transparency", according to Billery.

But the main reason was the loss of tax benefits after 2012, which made the projects unviable at the tariffs originally agreed, especially given their small size and complex logistics.

Furthermore, a 2011 court ruling had made it impossible to install turbines in coastal areas, thus ruling out development on most islands.

On top of all that, one of the developers — Alizéo, a French start-up developing a new 1MW turbine that had been awarded half the capacity from the tender — was declared bankrupt before building a single project.

In 2013, it was all change yet again, when the energy-transition law introduced a regulated tariff for projects in cyclone zones, namely la Réunion, Guadeloupe and Martinique.

The tariff, which is still in place today, is set at €230/MWh for the first ten years, then switches to €50-230/MWh over the next five years, depending on the number of full load hours.

Such high tariffs are justified because the projects are relatively small in scale, located in complex terrain, and have to be adapted for cyclones.

To be eligible, they must also be equipped with intelligent management systems, day-ahead forecasting and storage equal to 10% of the connected capacity to help stabilise the grid.

The tariffs should also be seen in the context of current generation costs of €200-250/MWh, and around €300/MWh for diesel generation alone, Billery points out.

Importantly, 2013 also saw the introduction of a special exemption allowing turbines to be erected in ZNI coastal areas.

Otherwise, developers largely follow the same permitting process as in mainland France, which has been simplified since 2013.

There is now just one combined siting and environmental permit, including either an impact study for hub heights over 50 metres, or a simple notice of impact for smaller turbines. 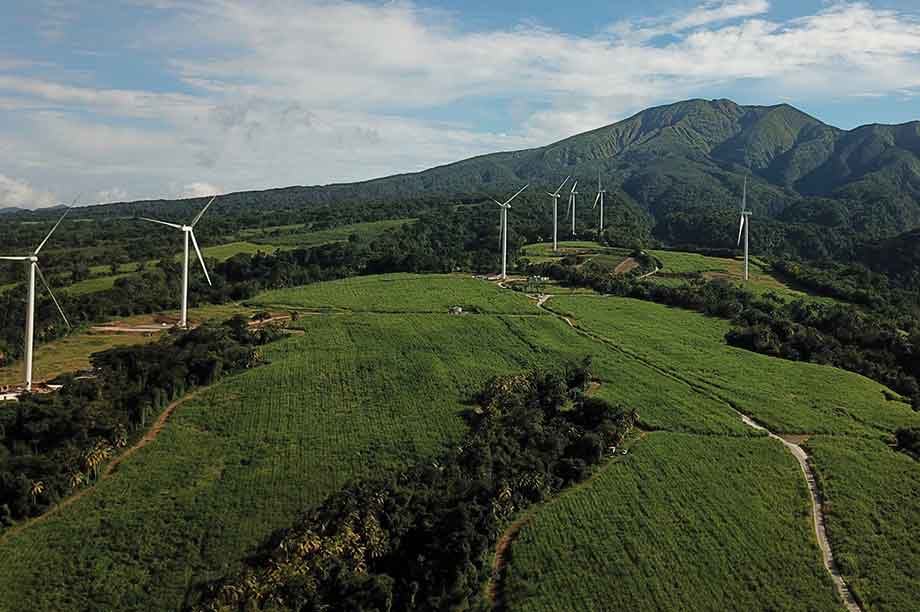 Outside the cyclone zones, developers in Guyane and St-Pierre et Miquelon negotiated the tariff directly with regulator CRE, while New Caledonia has its own tender system.

Corsica is subject to the same rules as mainland France: tenders for projects of seven turbines or more, and a top-up mechanism for smaller installation.

During this time, some of the ZNI’s oldest wind projects were repowered, such as le Souffleur and Petite-Place, also in Guadeloupe, which came online in 2015.

Both had their tiny Vergnet turbines replaced with more modern 275kW machines, although the repowered projects were still only 1.65MW and 2.48MW in capacity respectively.

Much larger projects have begun to come online more recently, most notably the 12MW Gress 1 development on Martinique, and Valorem’s 16MW project at Ste-Rose in Guadeloupe, both commissioned within the last year (see table).

Quadran (now part of Total) commissioned its repowered 7.2MW la Montaigne facility in Guadeloupe in June, and should complete its 20.4MW Eole Yaté project in New Caledonia in 2020.

While the feed-in tariff and simplified regulatory framework have helped drive this investment to some extent, technological advances are key, says Billerey. Traditionally, Vergnet was the supplier of choice in cyclone zones, thanks to its guyed turbines that can be lowered in strong winds, but at a price.

Now Vestas, Enercon, Siemens Gamesa and other OEMs are offering lower-cost turbines adapted to cyclone zones, responding to a potential market that includes India, China, Japan, parts of the US, Indonesia and the Philippines.

These turbines are more resilient, with yaw back-up systems to keep the rotor upwind if the grid fails, and pilotable.

Grid-management systems and forecasting have improved, and insurance companies are now willing to provide cover because the risk of turbine damage is relatively low, says Billerey. 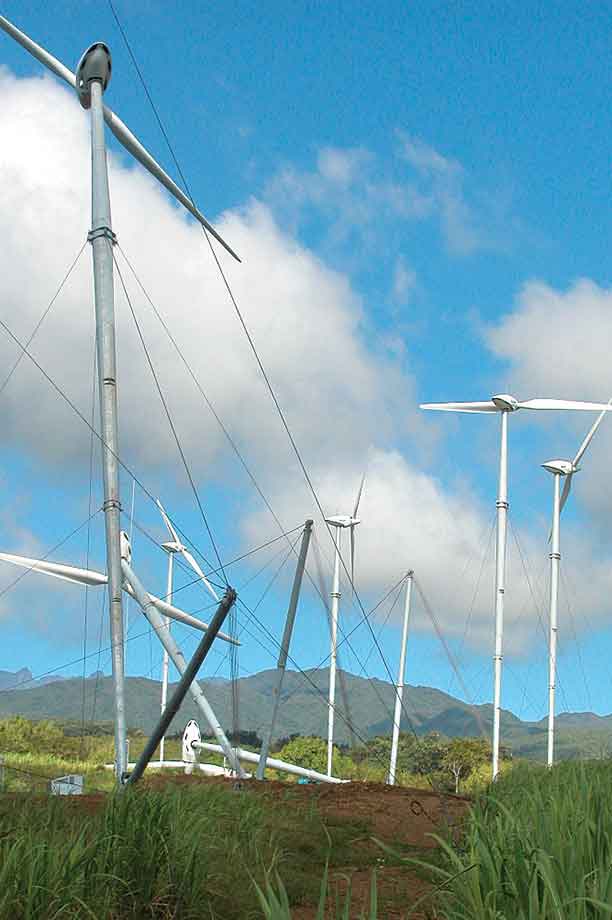 Folding technology… Vergnet's guyed turbines that can be lowered during cyclones were popular in early projects, but major OEMs are now offering models adapted to cope with cyclone conditions (pic: Vergnet)

Significant obstacles to ZNI wind development remain in place, however. One long-standing issue is the ban on turbines within 20-30km of a meteorological radar on Guadeloupe’s Grande-Terre island.

This blocks deployment in an area with good wind resources and space to build, notes Jean-Yves Grandidier, president of French energy group Valorem.

There are also plans to build fossil-fuel power stations in Corsica and Guyane.

"This is absolutely inconsistent with France’s environmental objectives, the reality of production costs, job creation, and, of course, energy autonomy," says Billery.

If confirmed, they would "block the realisation of renewable-energy projects for years," he adds.

A more general barrier is utility EDF-SEI’s concern about managing a grid with 100% renewables. Although the 30% ceiling technically remains in place, in reality it has been creeping up without undue problems. It was raised to 35% in 2018 and in most ZNI will reach 45% in 2023.

Both Ademe and SER regard the limits as unnecessarily low, given the technological, economic and environmental developments.

"With a significant use of storage capacity, a 100% renewable electricity mix is possible … while also satisfying the demand-supply balance," Ademe argues.

More renewables will also mean lower production costs. An increase in the share of renewables in the energy mix is accompanied by a decrease in the average levelised cost of energy, says Ademe.

This could be as much as 3-10% lower, depending on the territory and the scenario studied. Ademe estimates that renewables coupled with storage will be competitive with diesel-fired generation from 2025, including systems costs.

In 2018 SER issued a paper on energy autonomy in the ZNI, calling for, among other things, a new series of tenders for each territory, offering larger capacities, simpler and more coherent regulations, better grid management, and the faster introduction of smart grids to allow more wind and solar on the network.

The paper also gave SER’s recommended targets for wind power in each territory (see table, below).

Above all, it is essential that multi-year energy plans for the ZNIs, currently being revised, are in line with the 2030 target and the energy transition law of 2015.

The plans must be suitably ambitious, but the territories must also be given the means to realise them, and be supported by the national government, insists Billerey.

"As always in France, we need real political will, both local and national, to move towards energy autonomy. Acts, not just words," he says.

Billerey recommends maintaining the current support mechanism. "It at least gives financial stability and visibility in the medium and long-term. It’s a good tool for developing projects." 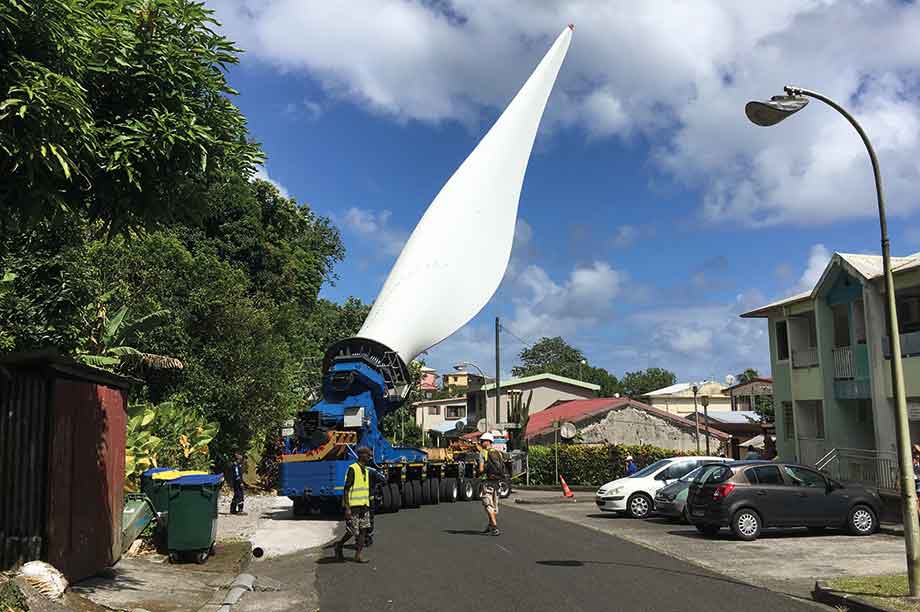 Changing it might risk blocking the system again in what is likely to remain a relatively small market. One project a year in each ZNI would represent good progress towards eventual autonomy, Billerey believes.

And there are, of course, the obvious environmental benefits in replacing coal and oil-fired generation with wind energy and other renewables in these often remarkable areas of natural beauty.

A floating dual-crane vessel will be used to install Vestas' V174-9.5 MW turbines at Arcadis Ost 1 in the German Baltic Sea

Manufacturer announces another large turbine order in June, adding to other supply deals in Finland and Spain

Global average onshore wind costs fell in the first half of 2021, but rising commodity prices may make renewables more expensive

The Danish manufacturer will supply TTR Energy with 30 of its V150-4.2MW turbines for a wind farm in Marne, northern France

Investments in renewables in Asia Pacific are set to rise in the next decade, while fossil fuel spending is due to decline