The installation of the E-147 prototype at a proposed test site in Germany fell foul of delays imposed by a permitting issue, explains Enercon sales director Stefan Lütkemeyer. The first prototype will instead be installed in Finland in the next few months, as part of a four-turbine pre-series batch all destined for Finnish sites. These E-147 EP5 E1 turbines will have a rating of 4.3MW, but units planned for 2020 will include uprated 5.0MW E2 successor models.

"The E-147 EP5 is technologically based on the Lagerwey L136 LP4, again featuring an in-house developed inner-rotor high-density permanent magnet generator [PMG]," says Lütkemeyer. Before Enercon took over Lagerwey in late 2017, the Dutch firm had installed two 4.5MW prototypes at a coastal site in Eemshaven in the Netherlands.

"This turbine has now been optimised and renamed as the 4.65MW E-136 EP5, and has entered serial production," explains Lütkemeyer. "We are currently producing 28 turbines for a project in Galicia, Spain." 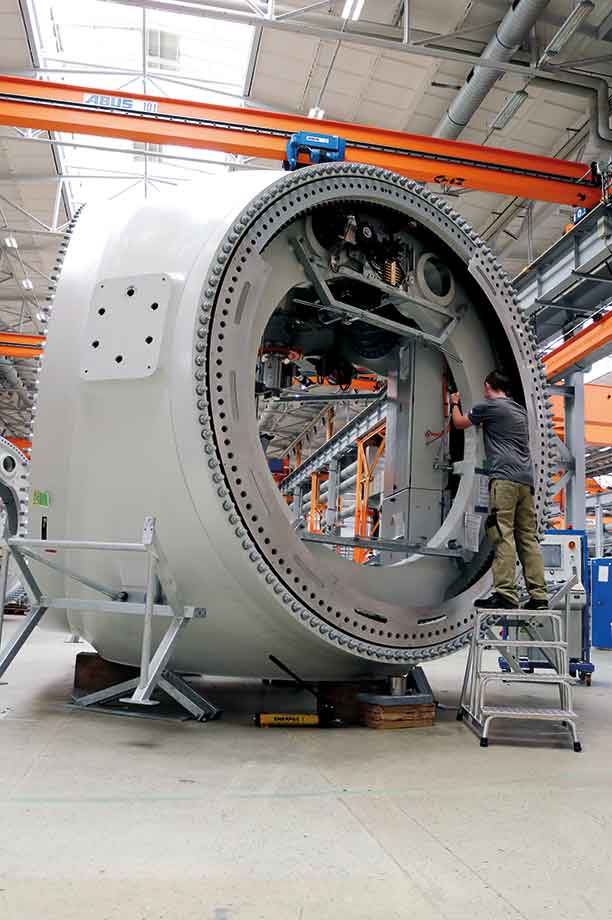 Arno Hildebrand, director of system engineering at Enercon’s Aurich-based Wobben Research and Development (WRD) centre, adds that most of the PMGs for the E-136 and E-147 are produced by an Enercon partner company in Magdeburg, Saxony-Anhalt. However, some generators at this stage of manufacturing ramp-up, are manufactured in Lagerwey’s Barneveld facility in the Netherlands pictured, right), which is now dedicated to new special products, including prototype generators.

Another key point is Enercon’s decision to avoid the heavy rare-earth element Dysprosium for the generator magnet. Dysprosium is more scarce and expensive than Neodymium, creating price volatility and supply-chain security risks. However, not using it means more cooling provisions and temperature management are needed because the maximum allowable magnet operating temperatures are lower.

This critical issue was solved by specific generator design choices. "The bigger generator dimensions meant we had to seek to optimise and find compromises between key variables," says Hildebrand. These include keeping the generator diameter below six metres for road transport, optimising generator efficiency and heat-dissipation performance together with manufacturing cost, and limiting active materials, especially copper and magnets.

Huge effort has been put into EP5 industrialisation. The innovative ideas incorporated in the original LP4 concept were reviewed, adapted, and optimised where necessary and viable. Enercon brought in more than 35 years of industrial series-production expertise, covering nearly 30,000 turbines, mostly direct-drive machines, with ratings ranging up to 7.5MW.

"The challenge was to raise the LP4 concept to Enercon quality standards and optimise all processes, including quality control for cost-effective series production in large numbers," says Hildebrand.

"Typical Enercon manufacturing ‘cost-out’ examples are reducing different machining surfaces whenever possible, and the use of longer bolts for easier components assembly. Enercon and its partner factories, on average, achieve a 30% reduction of initial production costs through industrialisation, large-series effects and purchasing power," he says.

The plant producing nacelles for Enercon’s 2-3MW EP2 range, together with nacelles for Russia-bound 2.5MW Lagerwey turbines, is in full swing during our visit. In another section of the huge halls, four E-147 EP5 nacelles are taking shape in various assembly completion stages. The technology transition and ramp-up pressure is perhaps best reflected in the fact that these units still bear the Lagerwey name (pictured, below). 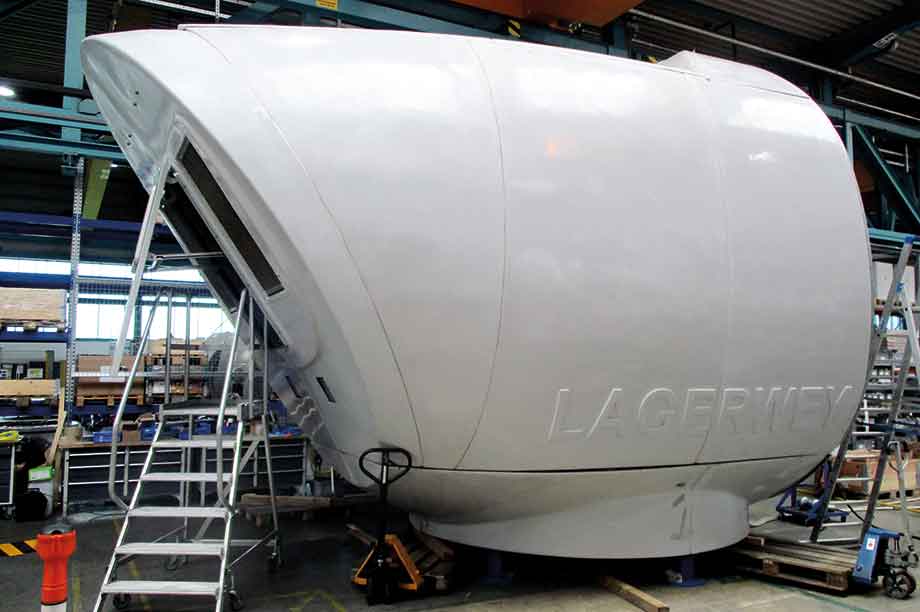 Another key aspects in upgrading the LP4 to EP5 was extending turbine design life from 20 to 25 years, bringing it into line with other Enercon products. The third and final model in the EP5 range will be the E-160, rated at 4.6MW, designed for IEC IIIA sites. "It will be fitted with custom-developed 78.3-metre LM blades, rather than the ‘standard’ LM blades of the E-136 and E-147," says Hildebrand.

"The 4.6MW E-160 and 5.0MW E-147 share the same generator layout, but the former turns slower and, for similar output, generator torque is thus higher. The main consequence is that it produces more generator heat for dissipation. This explains the reduced rating for the E160 and our continued engineering challenges to retain sound generator operating temperatures, each time the rating and rotor diameter increase by a step."

Lütkemeyer declines to elaborate in detail on the inevitable future scaling steps in line with the competition. "The E-160 is in the final product-development stages, with a first prototype, on a 120-metre modular steel tower [MST], planned for the first quarter of 2020 at Wieringermeer, North Holland. The second will be installed at an inland site in the German state of Brandenburg near the Polish border. Production ramp-up is planned for Q3/Q4 2020," he says.

Encouraging news for the EP5 platform’s future prospects came with the recent agreement Enercon signed with Chilean utility Colbun, securing an option for 140 turbines for the Horizon wind farm. Once this transaction is completed, it will be the largest wind turbine purchase ever made in Chile for a single project, according to Lütkemeyer. The plan is to deploy the E-160 EP5.

Lütkemeyer continues with an update on the EP3 platform, stating that the 4MW E-126’s validated power curve proved 5% better than calculated values, due to reduced system losses and improved aerodynamic performance. Full-type certification is expected in September. By mid-August, 16 turbines were operational, including 13 units at a major project under construction in Turkey.

"E-126 EP3 ramp-up has been faster than anticipated, considering that the first prototype was installed in August 2018 and with production fully localised to Turkey’s companies. They come with tubular or modular steel towers, both of which are ‘built-to-print’ according to our certified tower designs." 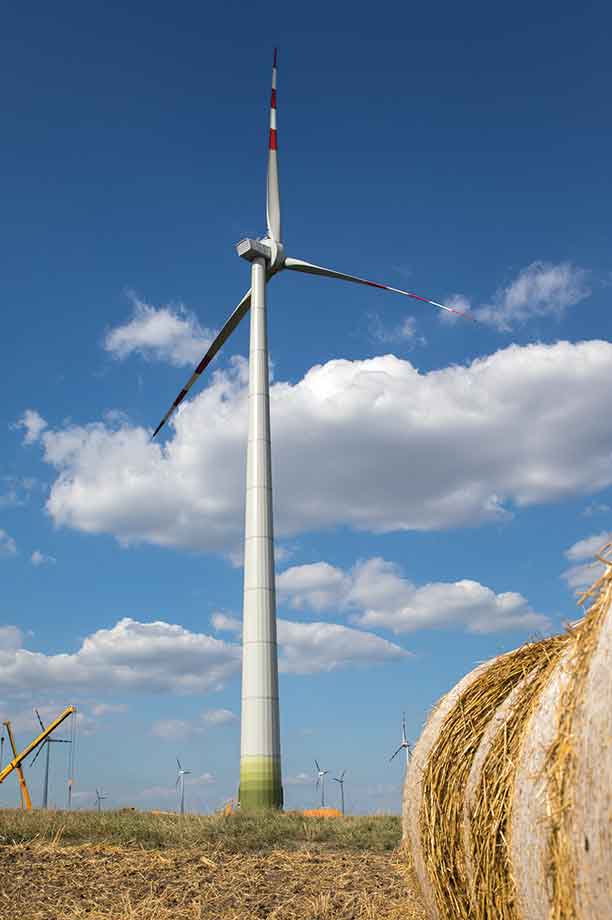 E-126 EP3 production is also being ramped-up in Magdeburg for projects in markets including Germany, Sweden, the Netherlands, Canada and Vietnam. Several clients have shifted their orders from the E-126 EP4 to the E-126 EP3 because the power curves are now almost comparable, and the EP3 is lighter and cheaper, Lütkemeyer says.

Full certification for the E138 EP3 is well under way. Inside the WRD blade-testing facility, a blade is undergoing rigorous static and dynamic tests. Static tests involve maximum bending loads edge-wise (inside the rotor plane) and flap-wise (perpendicular to rotor plane) directions. This is followed by dynamic testing, whereby a blade undergoes either two million cycles with maximum loads, or six million cycles with reduced loading. Both comparable accelerated testing procedures simulate the full 25-year operate lifetime. First project deliveries of the E-138 EP3 are expected before the end of the year. The cumulative EP3 platform order intake exceeded 2GW by Q3 2019.

Enercon’s training centre in the port of Emden, near its Aurich headquarters in Lower Saxony, offers three- to four-week courses to international teams practicing the installation of a complete EP3 nacelle with a single blade. The teams also learn to install full electrical systems inside the nacelle and tower base, plus tower-nacelle linkage. The EP3 nacelle at the centre’s gravel-paved grounds was the second unit Enercon had produced. It is mounted on a short tower, and the facility aims to simulate a real wind-turbine installation site process, including providing a series of containers for smaller components.

"MSTs are becoming a key tower technology for both EP3 and EP5 platforms, but there is still a role for conventional tubular steel and hybrid-steel towers based upon the latest in-house next-generation concept," says Hildebrand. "Tower choice in practice depends on several factors, like market type and site conditions, as well as the distance from concrete parts factory to wind project site." 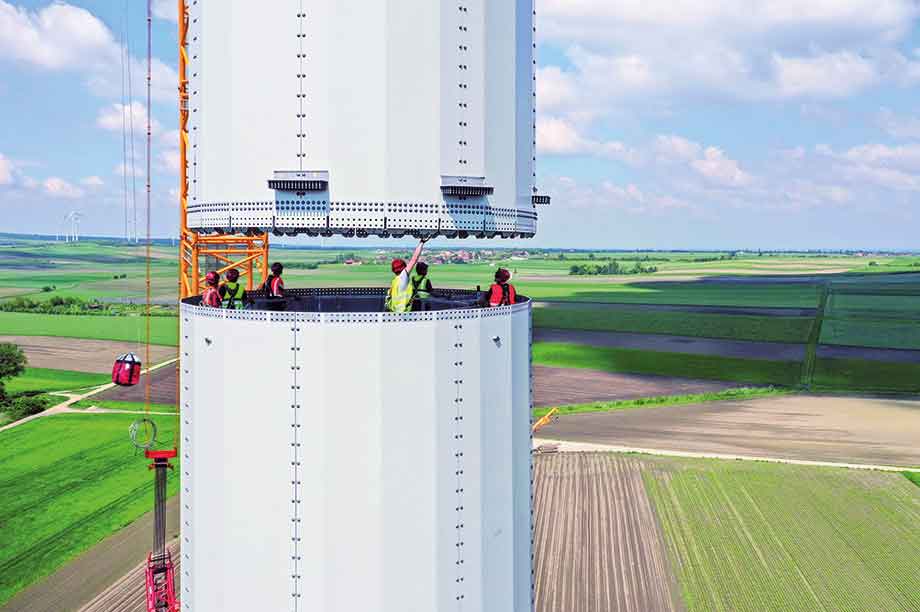 Hildebrand emphasis the importance for installation teams to familiarise themselves with MSTs, which is a solution suited to many different markets. They practice with the second "material-fatigue" optimised MST design variant. The main difference from the original Lagerwey design is that the lower and upper steel-bolted sheet sections do not overlap any more, but face each other directly. This is supplemented by a metal cover sheet at each side and double rows of bolts completing the bolted joint.

Direct-drive pioneer Enercon is determined to continue pursuing this technology. "Once full integration of Lagerwey is completed, we will continue to jointly develop new and innovative generator solutions," says Hildebrand. "We actively hire direct-drive generator experts who have made their mark by bringing in fresh know-how and ideas. These factors together should enable us to stay ahead of the global competition, including the many contenders with geared solutions."