Queensland’s Renewables 400 initiative, which is also seeking 100MW of storage capacity, received over 100 applications from developers.

They have now been whittled down to ten sites that will submit bids in a reverse auction process. Wind sites included in the shortlist are: Acciona’s 540MW MacIntyre site; Goldwind’s 800MW Clarke Creek project with a storage element; Infigen’s 65MW Forsayth Integrated Facility with a storage element; Neoen’s 130MW Kaban Green Power Hub with 100MW of storage; and Windlab’s 100MW Lakeland project.

The auction process will be managed by the new state-owned power company CleanCo. Following submission of the bids, CleanCo will make its recommendations to the government in early 2020. 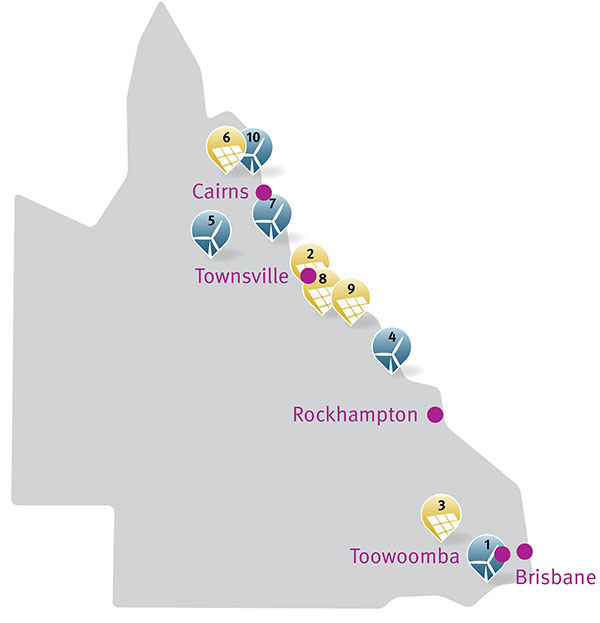 Queensland selected ten renewable projects, some with storage elements, to proceed to the reverse-auction

"Preliminary analysis indicates CleanCo should reduce wholesale electricity prices on average by around A$7/MWh ($4.89/MWh), which is expected to translate to an estimated A$70 ($48.86) per annum saving for the average Queensland household," Lynham said.

"This takes Queensland one step closer to our target of 50% renewable energy by 2030," he added.

"Reverse auction programs have proven extremely successful in the ACT and Victoria in helping the industry scale up and reduce the cost of building wind and solar projects in Australia," said CEC chief executive Kane Thornton.

"They encourage developers to out-bid each other to deliver the lowest possible price, meaning the Queensland Government will get the best possible value for any money it allocates towards supporting clean energy projects across the Sunshine State.

"The Australian Energy Market Commission predicts that wholesale power prices should fall over the next couple of years as a result of all the renewable energy being built, and a series of additional projects supported by the Queensland Government under Renewables 400 will help this dynamic even further," Thornton added.

Wind produced 25.6% of the electricity fed into Germany's grid last year – the first time a renewable energy source accounted for the largest supply of power

Africa and the Middle East’s cumulative wind capacity reached more than 7GW by the end of 2020. However, the region is not fulfilling its potential, GWEC warns