Two landmark turbines sitting on bright-white-coated coning lattice-steel towers greet visitors to the Mühlenheider wind-power museum in the village of Stemwede Oppendorf in the German state of North-Rhine Westphalia (NRW).

The main hardware exhibits are concentrated in an open space of the farm where museum chairman Wilfried Winkelmann has lived for many years. 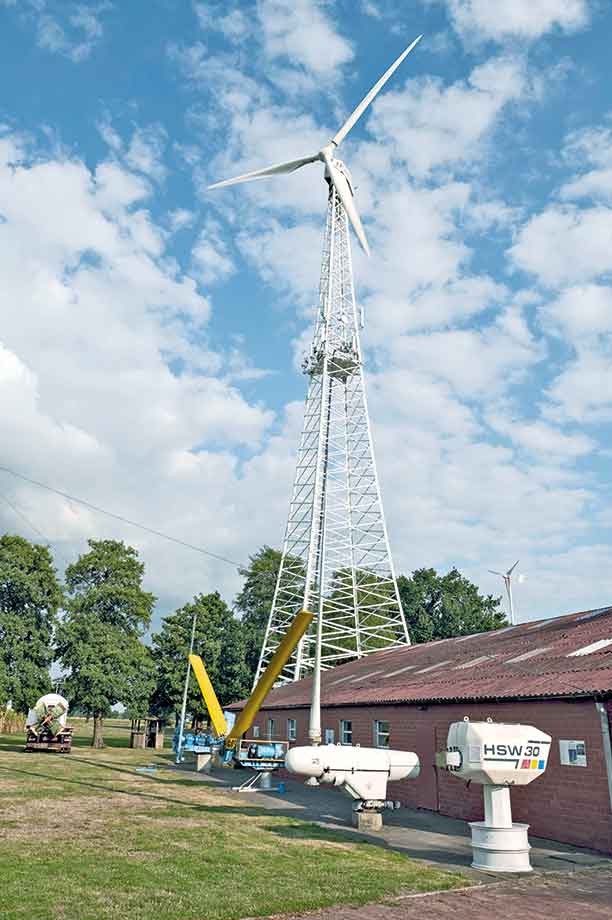 "They were imported from Denmark and were my first wind power investment.

"We expanded this in 1997 with ten 600kW Nordex N43 turbines, featuring Germany’s highest lattice-steel turbine towers at the time, with a hub height of 77.5 metres.

"The towers were made by SeeBa, a local firm in our area."

The museum opened in 1998, and the idea chimed well with NRW-state plans to make the World Expo 2000, which was to take place in nearby Hanover, a showcase for wind across a region.

Even though this plan was not realised in the end, the people behind the museum venture carried on regardless.

Museum manager and advisory board member Arne Jaeger is also a professional photographer who has been taking pictures of wind turbines since his early youth.

Several of his historic turbine pictures are displayed inside the museum’s visitor relaxing area. Jaeger and Winkelmann are responsible for daily operations, from receiving visitors to searching for new exhibits.

Their work is supported by more than 30 volunteers and a newly formed six-member advisory board.

One of the museum’s missions, according to Winkelmann and Jaeger, is showing visitors that the birth of modern wind power in Germany in the late 1970s and early 1980s was, to a large degree, a bottom-up movement.

This was supported by a broad variety of dedicated wind pioneers and typically small firms embedded in local communities, prepared to cooperate and share ideas.

Another common goal was to create a platform with a single voice to be able to resist the powerful nuclear and coal lobbies and the utilities, which had a generally negative attitude towards wind power at the time.

The fate of the 1.5MW Tacke TW 1.5 turbine the pair bought in 2014 is an example of the obstacles wind power faced in the early days.

"This was the second prototype of a major pitch-controlled variable-speed concept development, installed around 10km from the museum in 1997," they explain.

"It was Germany’s first large-scale inland installation. The first prototype with a similar 65-metre rotor diameter was installed a year earlier at a coastal site in Emden.

"When we bought the turbine from utility RWE in 2014, it was in fairly good technical order but had only run for 2,000 hours in 17 years."

The turbine can be visited, but getting inside the nacelle is not allowed for safety reasons.

The installation now forms an integral part of an organised tour taking in 44 historic wind turbines in the area.

Preserving modern wind-turbine heritage requires continuously expanding the current range by attempting to save at least one unit of each individual turbine model before it is scrapped and lost forever. 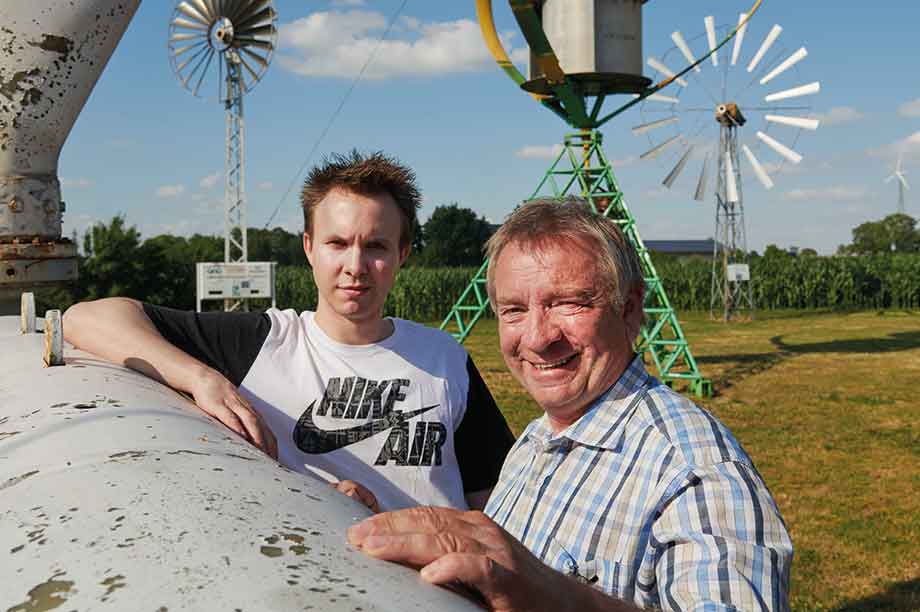 Preserving heritage… Arne Jaeger (left) and Wilfried Winkelmann are always on the lookout for historic turbines before they are lost forever (photos: Jan Oelker)

The museum also obtained a complete archive of the German wind energy association BWE and its predecessor body, covering the period 1978–2003, plus a large historic turbine photo archive.

Professional wind photographer and advisory board member Jan Oelker is a museum supporter and key source on turbine and industry history in Germany and internationally.

Each turbine in the museum has its own story, and this article can only provide a brief overview.

The Dutch company’s variable-speed passive-pitch controlled turbine became the first private installation to be connected to the grid in Germany and operated between 1982 and 2001.

It was the museum’s first acquisition. Initial plans to re-install the complete turbine with tower at the museum premises had to be dropped because no building permission could be obtained.

This experience set the limitations that had to be accepted for most other exhibits acquired later.

Acquisition number two was the 50kW three-bladed pitch-controlled Krogmann 15/50 built in 1989. It features a 15-metre rotor diameter, has a synchronous generator and, still uncommon in that period, operates with variable speed.

With a specific power rating of 283W/m2, the turbine was considered well suited for low-wind sites, and designed as part of a technology development programme supported by the NRW-state government. In total, 60 turbines of this type were made.

Next, the museum bought a two-bladed 33kW Aeroman 14.8-33 upwind turbine model with a semi-integrated geared drivetrain and a 14.8-metre rotor diameter.

It was made in 1987 by MAN Neue Technologie, a subsidiary of German truck manufacturer MAN. The history of this small turbine is interesting because Aeroman was initially meant as a test platform for the two-bladed 3MW downwind Growian test turbine (1979–1988).

Various configurations of the small Aeroman turbine were sold, with a total of about 470 turbines produced, including some 300 units exported to the US.

The two-bladed pitch-controlled downwind HSW-30 (1988) project started as an Aerodyn Energiesysteme product development. It had a 12.5-metre rotor diameter, operated with fixed speed and was known as noisy due to a high rotor speed. HSW filed for insolvency in 1999 and is now part of the Senvion heritage.

A prominent exhibit is a 4kW Darrieus-type vertical-axis design with three aluminium blades and an eggbeater shaped 5.5-metre rotor atop a lattice-steel tower. German aerospace company Dornier System built the prototype in 1979. 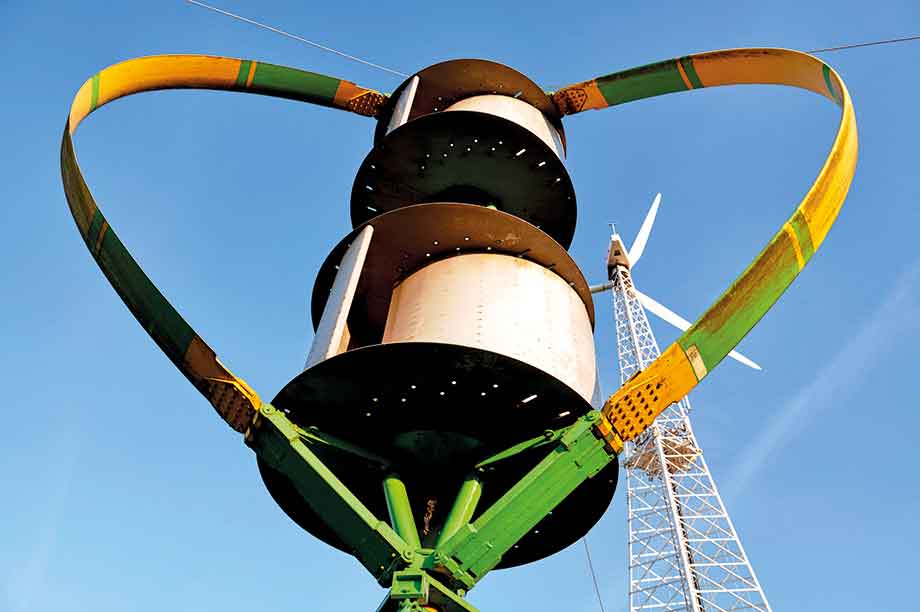 "Like many Darrieus turbines, this installation is not self-starting, and to solve this problem, the developers incorporated two ‘drag-type’ Savonius rotors.

"Due to the high cut-in wind speed of 8m/s, the ‘hybrid’ turbine was only suitable for high-wind sites. It ran between 1979 and 1983 on the North Sea island of Pellworm [in Schleswig Holstein], as part of a nine-turbine test field."

The overall design effort of the Dornier turbine design above all shows enormous pioneering spirit and a drive to explore, while at the same time exposing at least one crucial gap in scientific know-how.

While creating the Darrieus-Savonius hybrid solution may have (partially) solved the lack of self-starting, it destroyed the Darrieus rotor’s aerodynamic performance.

The Trebur wind turbine is a 3.6kW fixed-speed, multi-bladed upwind design with drag-type steel blades and a two-tail system for output control and redirecting the turbine to the wind. It operated from 1992 to 2005. 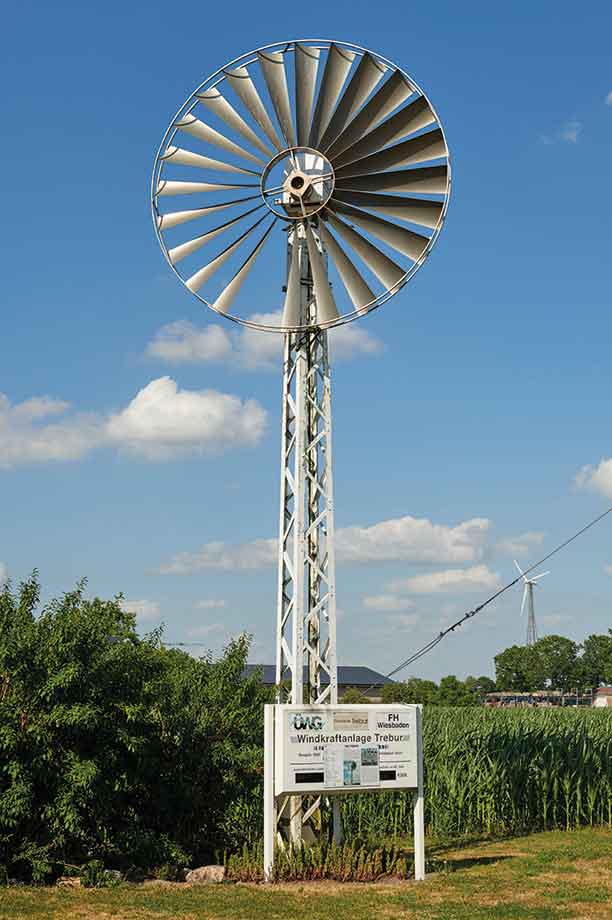 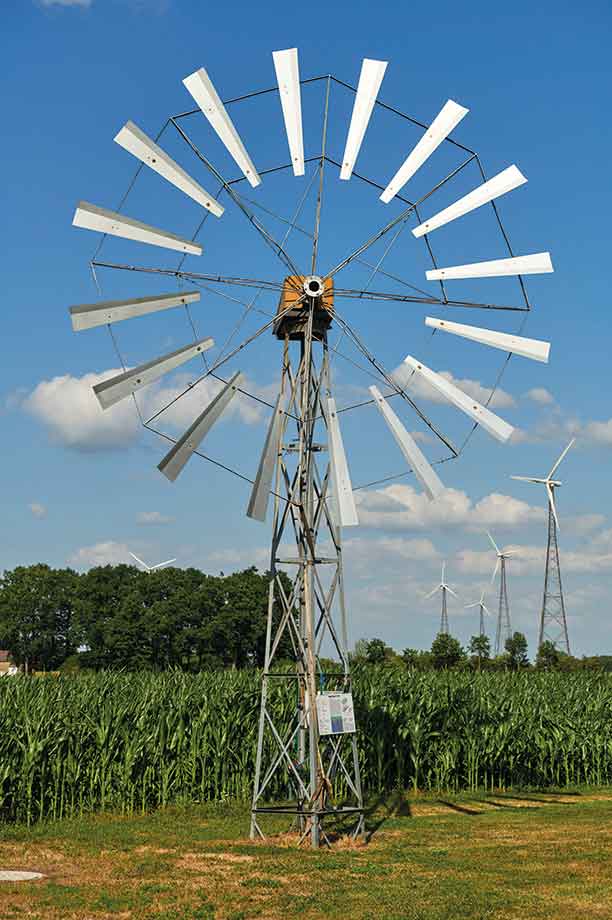 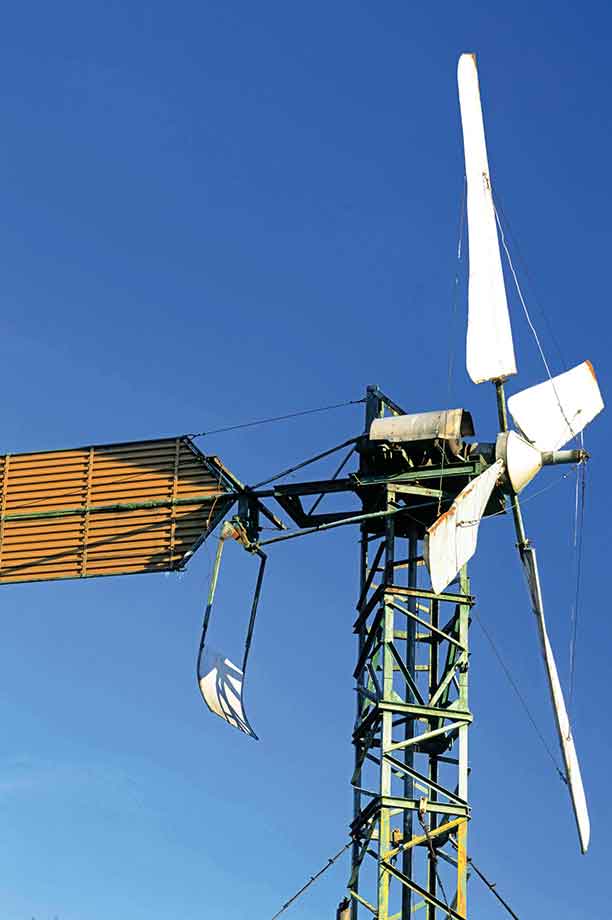 Like the original, the improved concept was based on classic US windmill designs, but with 16 aerofoil-type blades and a hydraulic-activated tail system to control rotor speed and curb maximum output.

The turbine operates with variable speed and the electric power it generates is used for heating purposes. The museum’s turbine was built in 1977.

Early this year, the museum acquired a 55kW Enercon E-16 turbine with a 16-metre rotor diameter, which operated for more than 30 years in northern Germany as part of a five-turbine wind farm, installed in 1987.

The variable-speed stall-controlled machine features a conventional high-speed geared drivetrain with a main shaft supported by two bearings, introducing the unusual length and shape of the nacelle that was to become a typical feature of the company’s designs.

Enercon became Germany’s largest turbine supplier and introduced the groundbreaking 500kW E-40 turbine in 1992, followed by many new, ever larger models in the years to come. 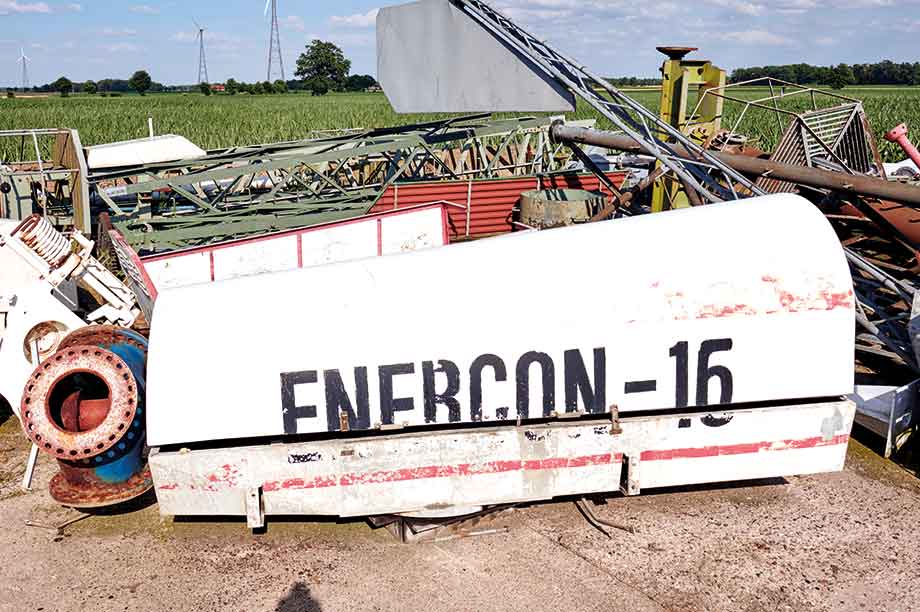 Just as interesting as the turbines are the museum’s many different blades. The wide variety of aerofoil shapes reflects the level of experimenting, with trial and error initially the key driver for advancing technology and the main enabler for continuous size increments. 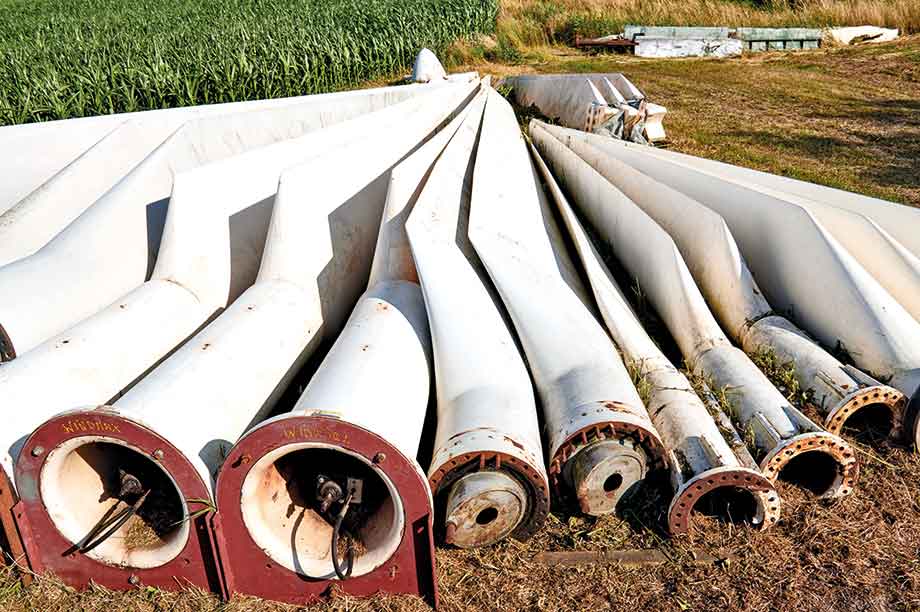 This step-by-step technology advancement is further reflected in the many different blade-hub linkage solutions on display, and an amazing variety of alternative blade concepts, such as segmented blades.

Jaeger has photographed quite a few historic turbines, including several self-built single pieces.

The level of design skill and workmanship behind these projects is often remarkably high, he thinks, and several have been preserved for the museum. But sometimes it doesn’t work out.

"Unfortunately, we were not always able to spot in time when a unique turbine model will be dismantled for whatever reason, and without fast action from our side, was simply scrapped," Jaeger says.

Robert Gasch (82) has become the first chairman of the Mühlenheider wind power museum's advisory board.

He is an emeritus professor at the Technical University of Berlin's Aerospace Institute, where he taught structural dynamics from 1972 to 2001.

Gasch discovered a new professional and academic challenge in wind-technology research in 1979, motivated by growing concerns following the Limits to Growth report (1972), the 1973 oil crisis and the Three Mile Island nuclear plant accident in the US in 1979.

Decades of involvement in all aspects of modern wind technology, from blades to controls and drivetrains to complete turbine design, resulted in a comprehensive lasting scientific, academic learning combined with technology and product development experience.

Many of Gasch's former students went on to become industry leaders and academics in the wind-power field in Germany and beyond. Gasch is co-author of the engineering textbook Rotordynamik (Rotor dynamics). His best-know publication is Windkraftanlagen (Wind Power Plants) of which the latest, reworked and expanded edition dates from 2015.

Gasch likes to combine theory and practice, and while at the TU Berlin, he conducted a spectacular experiment involving a seven-metre, three-bladed downwind rotor mounted on a Volvo car roof. A series of pictures show the complete car-turbine assembly taking off and getting airborne during a high-wind driving test.

Gasch is also remembered for the development of several Südwind turbine models, each increasing in size in parallel to technology advancement.

"We commenced in 1980/81 with a small five-bladed turbine with a 3.4-metre diameter and output control via a backward tiltable rotor," he recalls. 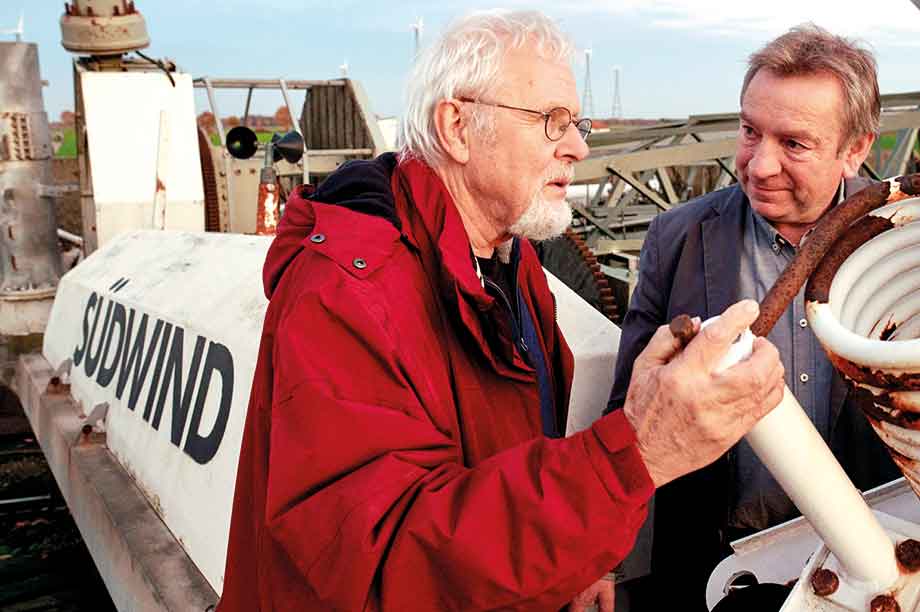 Expert on board… Robert Gasch (left) with Wilfried Winkelmann and one of the Südwind turbines he developed (photo:Jan Oelker)

"A year later we made a water-pumping sail-type windmill for Mozambique, and developed a 15kW three-bladed turbine with a seven-metre downwind rotor.

"Südwind Windkraftanlagen was established in Berlin in 1982, because a technical university in our view was not the most suitable overall environment for the continuing development of increasingly larger-scale turbines."

The final and largest Südwind prototype was the 600kW pitch-controlled variable-speed S46 model with a 46-metre rotor in 1996, before the company filed for insolvency in the same year.

Looking back, these early years were characterised by lots of experimenting with many different conceptual ideas and learning by doing, according to Gasch.

This spirit is reflected in many of the museum's exhibits of the modern wind-industry founding period.

"One of the greatest wind pioneers for me remains Johannes Juul (1887-1967), the Danish inventor who developed a fixed-speed turbine concept with a directly grid-connected asynchronous generator.

This Gedser wind turbine with 200kW electrical output was operated continuously from 1957 until 1967. It became the leading electric-power conversion concept, for many years, known as the Danish design principle. And what makes him even more remarkable to me is that he never filed a patent," Gasch says.

Juul, like another key inventor who came later — Enercon founder Aloys Wobben, who developed the E-40 variable-speed direct-drive turbine — was an electrical engineer rather than a mechanical engineer, Gasch points out.

This matters because it is always the electrical side of the turbine that feeds into the grid. The introduction of variable speed solved a major issue with reactive current fed into the grid.

Gasch continues to be impressed by the huge advances the wind industry has made in the past four decades, including the capability to develop rotor blades now up to 107 metres in length.