RWTH Aachen is a technical university in North Rhine-Westphalia, Germany’s westernmost state once best known for its coal and steel industries.

Research carried out by academics and students over the years meant accumulated know-how on drivetrains, machine elements, systems engineering and other scientific specialisations relevant to the wind industry were spread over multiple institutes.

Discussions to bring them all together under one roof started in 2009-10, recalls Georg Jacobs, a professor at the university and a co-founder of its Centre for Wind Power Drives (CWD).

"This knowledge base includes decades of experience with drive-system applications in many different industries, including automotive, rail and wind power," he explains.

"We intensified our interdisciplinary research of wind-turbine-specific drive systems in 2010 and, in parallel, applied to the German Science Council for the necessary funding.

"This was granted and buildings containing the wind-turbine test rig were completed in 2014, followed by our first primary CWD research focus on wind-turbine drivetrain modelling to increase reliability," Jacobs says.

Measurement campaigns on the turbine test rig allows model verification down to the detail of local contacts — in other words, creating added value by comparing measurement results with model outcomes for validation and model optimising.

"Initially, we used a proven software tool called Dresp, which we developed over 30 years for the FVA, the German Research Association for Drive Technology, to calculate system torque oscillations," says Jacobs.

"To drill into more advanced details, we switched to commercial multi-body software-modelling tools offering calculation capabilities for all six degrees of freedom. Our researchers gradually expanded these tools with in-house developed user models."

The huge nacelle test rig inside the CWD building can accommodate full nacelles up to 4MW, and simulate wind load conditions as experienced "in the field", plus real electricity grid conditions.

The rotor-input side incorporates a non-rotating non-torque-load (NTL) device, a load-frame with hydraulic cylinders that allow simultaneous multiple dynamic movements at five degrees of freedom.

The system comes with a rotating output shaft and can simulate all rotor loads normally imposed on a drivetrain.

The output shaft, as with "normal" rotor hubs, is rigidly attached to a geared or direct-drive system for testing.

The grid site can mobilise electric power up to 15MW to realise any grid structure with the associated load patterns," says Jacobs.

"Grid and wind loads are fully independent variables, and we can either deploy IEC class-related wind-load cases or, alternatively, use real wind field data as system input.

This is supplemented by various available rotor models offering specific aerodynamic and structure characteristics. Our real-time wind and grid simulations allow us to operate the turbine, including the controller, under field conditions."

Jacobs explains that if, for instance, an increase in wind speed is simulated, the turbine reacts with an adequate rotor-blade pitch action to that load change.

This example shows that reproduction of field operating conditions is possible in the lab. The capability to simulate real wind loads and grid conditions is a huge benefit, although still not standard for all operating nacelle test rigs.

"Perhaps the most important aspect of the total concept is that it allows determining critical loads and loads paths to adapt either turbine design or turbine control, or both," says Jacobs.

"This enables studying the impact of specific measures such as a recent experiment involving a simulated 70-metre blade set individually fitted with aerodynamics flaps similar to those incorporated in aircraft wings. We found that this add-on feature offered a 20% reduction in rotor-bearing peak load."

Jacobs moves on to another specific CWD in-house drivetrain development — this one inspired by the automotive industry, where car generators typically operate at speeds in the 20,000-revolutions per minute range.

In the wind industry, high-speed geared designs with generator speeds of 1,000-1,800rpm are still dominant onshore, though with a trend for medium-speed on the increase, driven mainly by Vestas and Ming Yang.

"This 5MW gearbox concept comprises a central ring-gear with power split into five step-up planetary gearboxes, each with a 1MW generator running at 5,000rpm," explains Jacobs.

"Individual gearbox-generator units can be fully decoupled in the event of a major mechanical or electric failure. Our comparative analysis showed that this high-speed distributed gearbox offers a superior solution regarding power density [Nm/kg], total efficiency, serviceability and systems robustness."

The solution allows individual generators to be engaged and disengaged as a function of wind speed and enables the turbine to always run at optimal operating points with maximum efficiency.

"It was encouraging for us that none of these parties could identify a technology showstopper," says Jacobs.

"However, we did find that this new concept does not really fit in the OEMs’ strategic considerations and value creation models. But we are still aiming to build a prototype to prove the potential and evaluate possible risks."

Our conversation moves on to the growing use of journal bearings in wind turbine gearboxes.

"The capability of journal bearings to operate under temporary mixed friction conditions — like during start-up or slowing down — is neglected by established industry standards. Prototypes for rotor bearings are also showing impressive technical performance and robustness, says Jacobs."

"At CWD we have developed a new method for calculating journal-bearing mixed-friction behaviour and the impact on operating lifetime, which has resulted in fresh insights."

A main outcome of the new method is that applying the right wearing-in procedure increases wear resistance and enlarges the lubrication gap. 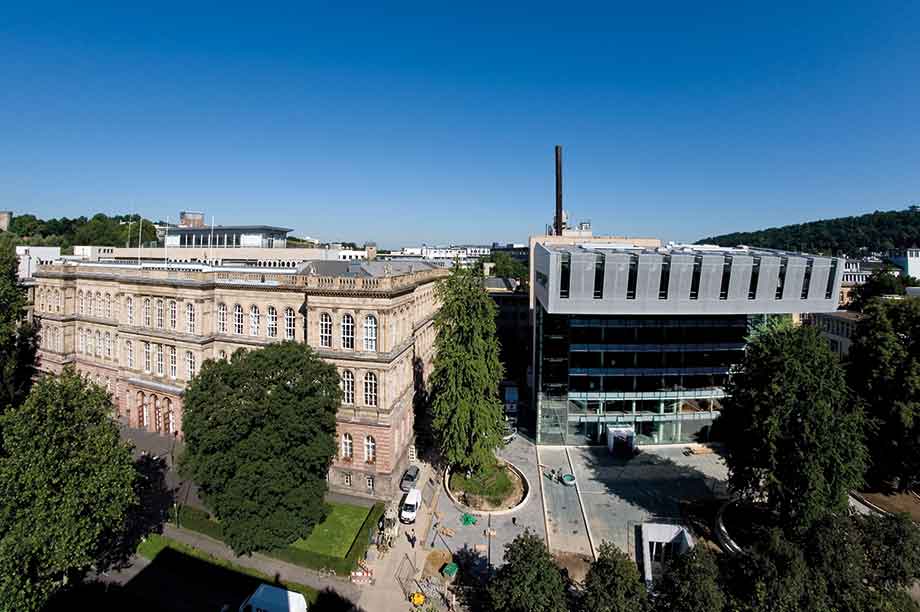 "Two of our 85 PhD projects are investigating the use of journal bearings for main shaft applications," says Jacobs.

"The first involves the development and validation of a conventional non-integrated four-point drivetrain layout with a main shaft, two bearings and a gearbox with side torque support arms.

The initial ideas were inspired by a large, single double-row taper roller, or moment bearings, like those applied in direct-drive turbines up to 10MW (see box on previous spread).

Another intriguing research project is WindLocator, which aims to accurately measure local wind speed and direction values in complex terrain (see below).

"This was triggered by figures from German wind energy association BWE, which indicated that the annual energy production of single turbines under such conditions could be 30% below the predictions from met masts and lidar devices.

"So there is a lot to gain here, when compared to the huge wind industry efforts required to increase drivetrain efficiency by as little as 1%."

He stresses that to collect more and better data, superior models are needed, along with the capacity for high-level analysis and the skills to draw the right conclusions.

He sees a lot of potential for OEMs and independent service providers (ISP) to benefit from digitalisation by developing improved business models, provided ISPs are granted full access to all the necessary data.

It is currently possible to find patterns in masses of data, and the necessary mining software is relatively inexpensive and commercially available.

Physical modelling for lifetime calculations is a different field from process mining, however, and is largely an engineering discipline.

"Integrating such intelligence with other renewable, or non-renewable, power generation and storage devices is an essential precondition for building future smart energy systems."

Mechanical engineer Tim Schröder has been working on the development of a conical journal bearing for two and a half years as his main PhD research project.

The design had to become a viable alternative to double-row tapered roller bearings, while offering functional benefits such as compactness and being exchangeable up-tower.

"In the early concept phase we had intensive discussion on how to cope with the fact that during rotation, the entire shaft deflects within the bearing housing," explains Schröder.

"These movements result from rotor-induced bending moments passed on to the shaft, which itself is very stiff, and the tilting would cause fast wear at the bearing edges.

"To eliminate this, we decided on a segmented bearing composed of multiple flexible pads, or ‘FlexPads’."

The alignment of parallel pads to the shaft without edge wear has been validated during comprehensive bench dynamic testing, and is now guaranteed under all operating conditions, Schröder adds.

Individual pads comprising a soft adaptable surface material are bolted to a flexible support structure to ensure uniform load-carrying distribution, and the design was further optimised in multiple steps. 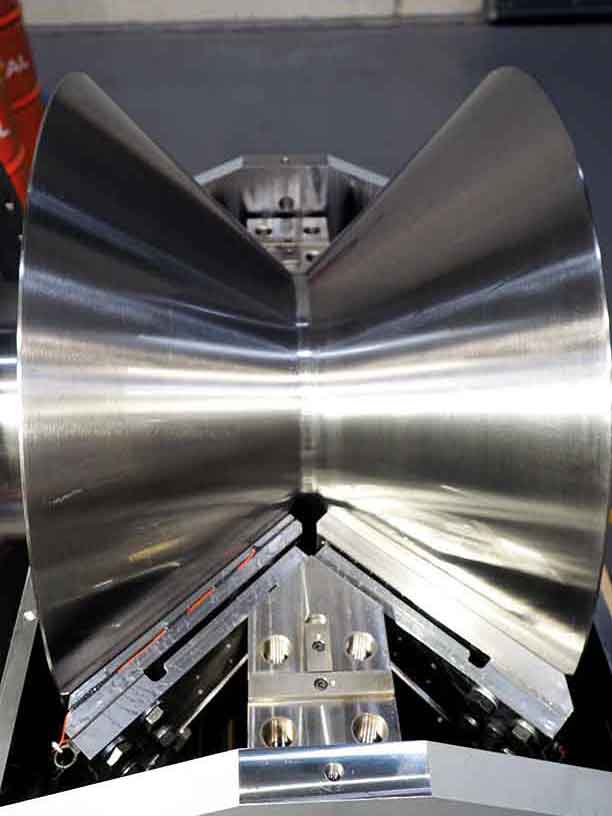 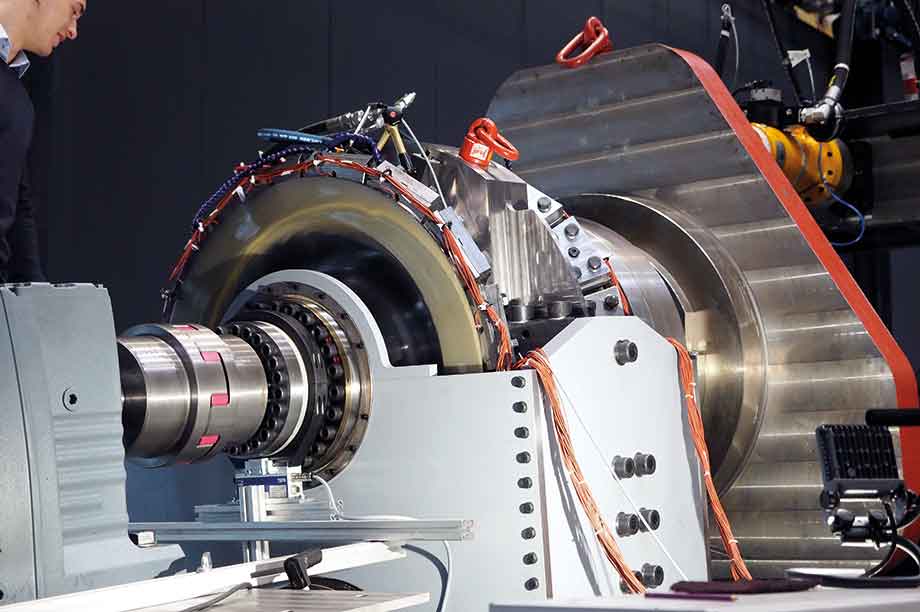 "Perhaps the biggest challenge was to find a way to calculate tapered journal bearings built in a double-cone shaft/pad design, which could also consider the flexible support structure of the pads and overall system deformations," he says.

"We found a suitable calculation tool developed by Gunther Knoll, a professor who is with IST, an Aachen-based hi-tech company. With the initial work now done, potential clients will definitely ask for a journal bearing wear prognosis."

Verification of bearing performance, including during critical start-stop conditions, has also been successful. Due to its very early transition to pure hydrodynamic lubrication, the bearing showed only minor wear following 8,000 start-up testing procedures, which already represents around 40% of a wind turbine’s design life.

The next step, planned for 2020, is fitting the conical bearing in a megawatt-class turbine to gain field experience. "We are convinced this is a robust concept and we are looking forward to gaining more experience with this technology," says Schröder.

Christian Ingenhorst started work on the WindLocator, another groundbreaking innovation owned by RWTH Aachen, 18 months ago.

The GPS-supported flying device incorporates an octocopter carrier system (a drone with eight two-blade rotors), plus a standard ultrasonic anemometer mounted at an elevated central position.

These are functionally independent systems. The carrier features a differential GPS system for accurate positioning, while the measurement system has an evaluation unit for saving wind speed and direction data, position acquisition, and an in-house developed software algorithm for carrier motion compensation.

"If it experiences a sudden change in either wind speed or direction or both, the change in wind loads will push the WindLocator main axis sideways and/or from vertical into an inclined position."

The algorithm corrects such movement-induced errors on wind measurements, but does not compensate for or control any physical movement of the carrier itself. Its main function is to continually analyse the device’s orientation to maintain high wind measurement accuracy.

The main benefits over met masts, sodar and lidar systems are that it combines real-time measurements with insights comparable to computational fluid dynamics (CFD) analysis, plus superior flexibility.

"Perhaps the most most important aspect is that it can substantially reduce AEP uncertainty through analysing wind speed profiles and validating CFD simulations," says Ingenhorst. "This is enabled by fast 3D measurement within planned wind-farm sites at individual turbine positions. Another possible application is measuring wake effects within wind farms."

The WindLocator can fly autonomously within any given wind farm in a pre-programmed mode, with battery capacity for driving the propellors during a single flight the critical factor.

However, the batteries can be exchanged quickly and the system is therefore capable of near continuous measurements. Data storage capacity is easily expandable. 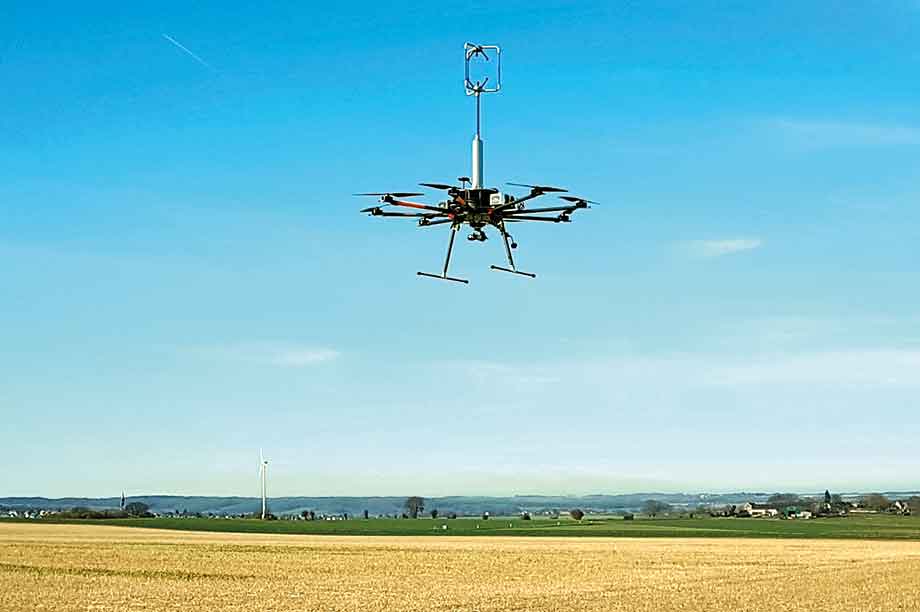 The WindLocator’s performance and capabilities have been tested and validated at two complex landscape sites in Germany.

"But our offering is more cost-efficient than comparable systems, and there is so much to gain by accurate, reliable AEP predictions. We can properly screen potential sites, and select the best possible turbine locations during project development."