The safest prediction that can be made for the future of the wind-power operations and maintenance (O&M) sector is that it will continue to grow rapidly.

This expansion reflects the rate of new wind-energy installations, which really began to pick up pace ten years ago. Nearly 80% of the 570GW worldwide capacity that was operating at the end of 2018 has been built since 2009, according to Windpower Intelligence, the data and research arm of Windpower Monthly.

Every year from now, up to 20,000 turbines around the world will be entering the second half of their 20-year design life, already having long since fallen out of standard manufacturer warranties.

The turbines now increasingly attracting the attention of O&M technicians are bigger, heavier, taller and much more complex than their predecessors.

The rise in installations from 2009 was accompanied by significant shifts upwards in nameplate capacity, tower heights, rotor-blade lengths and operating reliability.

This enabled wind development at sites previously considered economically unviable on the grounds of, among other things, low wind speeds and extreme temperatures, remote and hard-to-access locations, hilly and forested terrains.

But what undoubtedly looked good on the annual energy production (AEP) projections afforded by the new turbine technology needed to be weighed against the demands it imposed on the service sector.

Inspecting, repairing or replacing a 40-metre blade on an 80-metre hub height machine on the Texan plains in summer is one thing; the same operation on a 60-metre blade up a 120-metre tower on an Albertan mountain ridge in the winter, is quite another.

The O&M sector’s challenges will grow alongside the expansion in the number of turbines it services, and their technical demands.

The next generation of 5MW-plus onshore machines, with rotor diameters of at least 150 metres, mounted on 160-metre towers, pose a number of questions for future maintenance regimes.

The cost and availability of cranes with sufficient lift and height capacity to replace, say, a gearbox, is a key priority for operators. 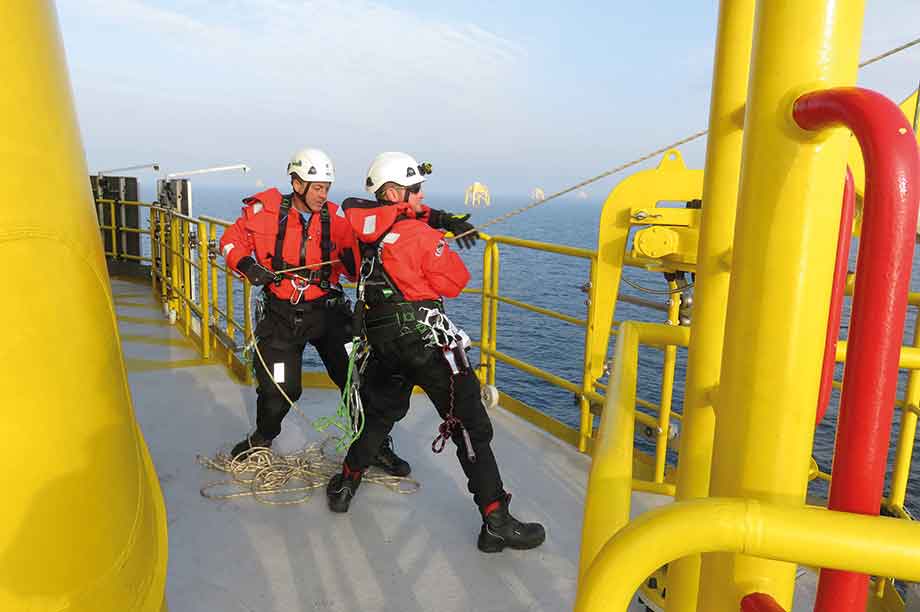 Offshore wind started to find its feet — in shallow waters and close to northern European shores — at roughly the same time as the onshore boom.

While the sector remains minuscule in terms of overall worldwide capacity — around 23GW at the latest count, according to Windpower Intelligence — servicing turbines at sea has presented a huge set of challenges for the industry.

That pressure will only increase as offshore wind moves further from shore, into deeper waters, and with 10-12MW hardware, rather than the sub-4MW machines now in operation.

The O&M demands on floating turbine arrays remain the subject for debate and research.

The servicing tasks are growing harder, but the O&M sector can call on rapidly improving technology to address some of the issues.

Blade inspection cameras, whether ground or drone-mounted, are growing in sophistication and accuracy, backed-up by the data analytic tools that can process thousands of photographs in a fraction of the time it would take engineers and technicians.

Drones are the most high-profile hi-tech recent additions to the O&M arsenal.

Siemens Gamesa Renewable Energy (SGRE) announced last October that it had signed an agreement with drone supplier SkySpecs for the inspection of blades on several hundred turbines among its fleet.

According to the company’s service chief, Mark Albenze, today’s technology enables one technician to monitor up to 15 turbines, rather than the three or four of only a few years ago. 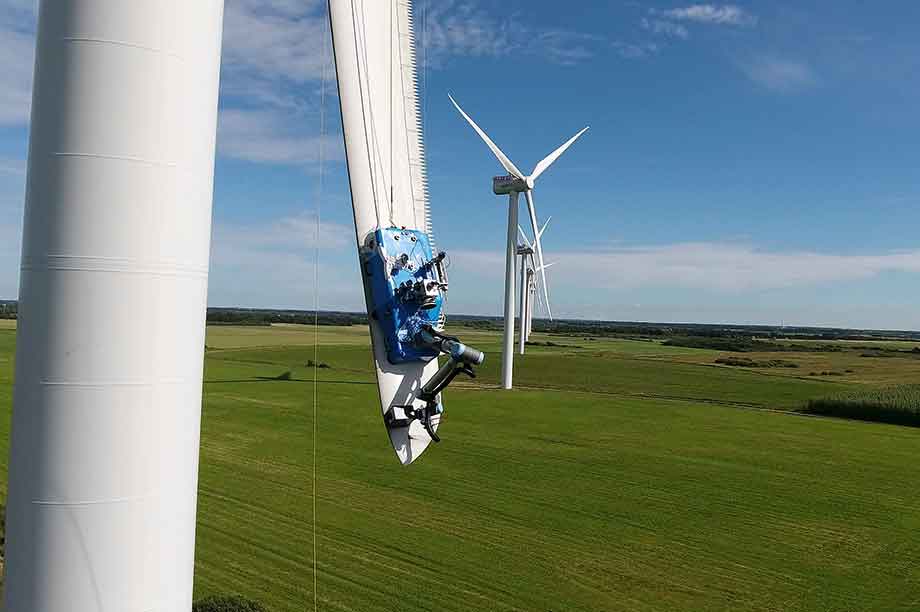 SGRE has also been working with Rope Robotics (below) on a robot that can travel over the length of a blade, monitoring the unit’s condition, but also performing some basic service tasks, such as cleaning and polishing.

Vestas is climbing aboard the automated technology bandwagon, too.

In May it announced a deal with unmanned airborne vehicle (UAV) supplier Sulzer Schmid, and blade service provider WKA, to inspect the blades on 1,250 turbines in Sweden and Finland in less than 12 weeks in order for them to be ready for the repair work that traditionally takes place during the less windy summer months.

Another prominent drone provider in the wind sector is Alerion, which uses novel laser-navigation technology for high-precision work close to structures.

Good wind resources often come with strings attached. Keeping turbines operating at their best during extremely cold periods has been a vital consideration for developers and operators in northern Europe and Canada.

This gives operators the information they need to decide whether the performance loss from blade-icing justifies investment in mitigation measures, such as Vestas’s electrothermal blade system.

Lidars have been thought of primarily as a wind resource measurement tool — their work largely completed once the decision to build the wind farm has been made. But they are increasingly being used in operational applications.

The 25 Vestas V150-4.2MW turbines now being installed at the Högaliden project in northern Sweden will all feature nacelle-mounted ZX Lidar systems to remotely assess wind conditions across the rotor diameter.

The information will enable the developer, in this case Fred Olsen Renewables, to make better decisions about tuning and control for individual turbines and across the wind farm.

Developers have long complained that OEMs do not always share the data they need for the most efficient running of their projects. Now they are finding their own ways.

O&M innovations of the year 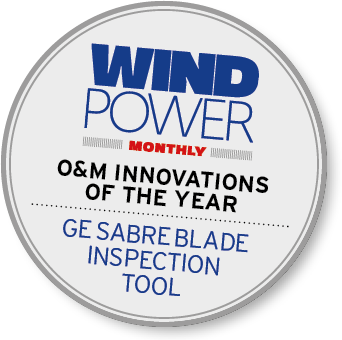 Drone-based systems have been grabbing most of the attention recently, but GE has kept its feet on the ground with its new blade inspection tool, now branded as Sabre, and which was first unveiled in autumn 2018.

Mounted on the bed of a small truck and positioned at the base of the turbine, Sabre uses thermal imaging and acoustic spectral analysis to detect and pinpoint cracks, delamination and bonding flaws below the blade’s surface. 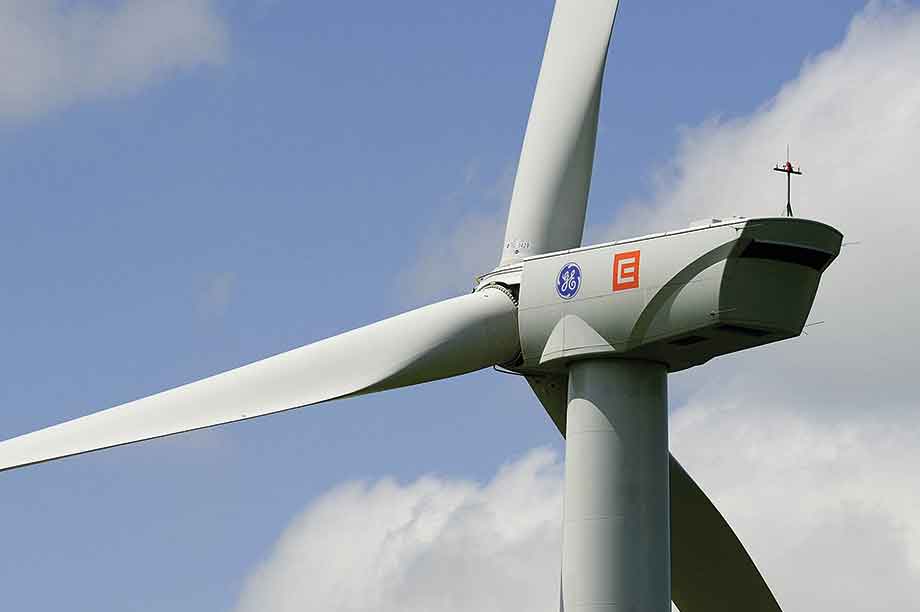 The average inspection time is 15 minutes, and the turbine can remain operational during the process.

"The ability to look beyond the exterior coating of the blade marks a significant advance in inspection technology" said GE service chief Anne McEntee. 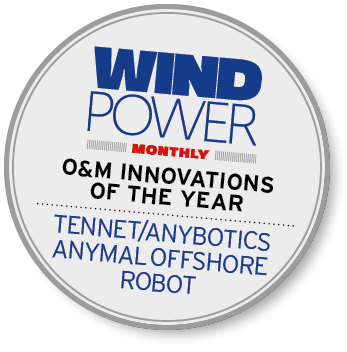 The greater hazards of working at sea are pushing development of autonomous systems to remove the human element from routine offshore tasks.

A good recent example is provided by "Anymal", the four-legged creation of Swiss robotics firm Anybotics. 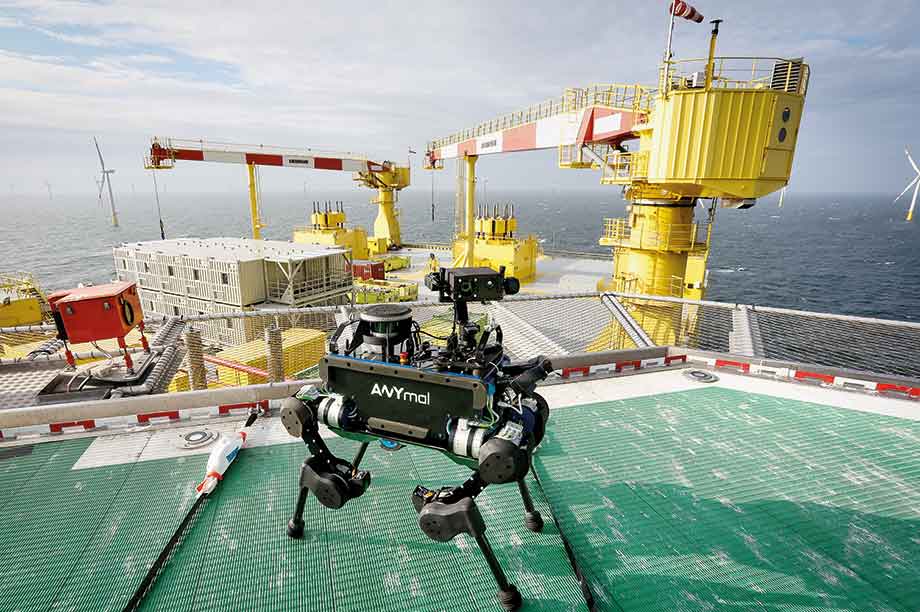 It was deployed to monitor machine operations, detect thermal hot spots and oil and water leakages.

Anymal can be remotely operated from an onshore control centre, and transmits real-time information from its visual and thermal cameras, microphones and gas-detection sensors. 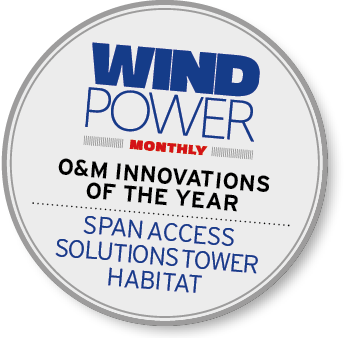 Cutting the cost and time of repairing rotor blades at sea remains a high priority for offshore wind.

Ropes and access platforms suspended from the nacelle have provided part of the answer but are difficult to deploy in high winds and waves.

Scottish company Span Access Solutions has taken the lessons learned from its work on bridge repairs to develop a tower-mounted access "base" for easier, quicker and safer access to the blades. 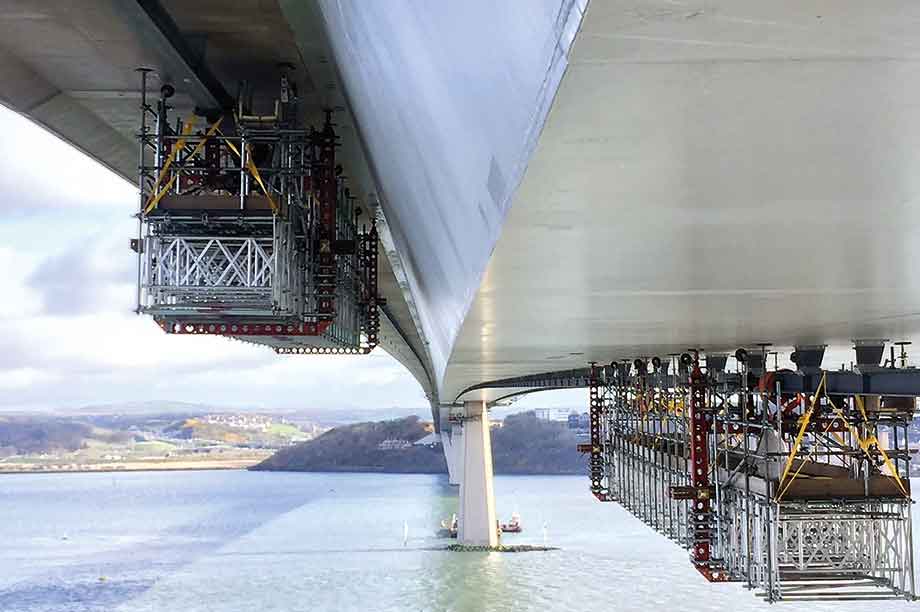 "The Base solution will be faster to deploy and more flexible to use than traditional suspended platforms," claims managing director Roger Turner.

Work continues on the design, following an £830,000 grant from the government’s Innovate UK development programme.