As floating offshore wind moves towards commercial deployment, the issue of how best to conduct heavy maintenance — in port or in-situ offshore — is rising up the agenda, with plenty of questions still to be answered.

The major components of fixed-foundation turbines can generally be replaced using jack-up vessels. However, this will not be viable for the majority of floating arrays, located in deep waters.

Instead, the turbines will be disconnected and towed back to port or, as technology evolves, it might be quicker, easier and cheaper to leave the platforms in place and carry out the work on site, especially for utility-scale arrays far from shore.

"Identifying alternative and cost-effective methods is ... a priority for the industry," says the Carbon Trust, which is studying heavy-lift offshore operations as part of its floating-wind joint industry project.

One of its studies, led by UK-based consultancy LOC Renewables and due to report early next year, is investigating the feasibility, challenges, technology needs and comparative costs of undertaking heavy maintenance of commercial arrays at the offshore site. It focuses on the exchange of major components, such as blades, gearboxes and transformers, in the forthcoming range of 12-15MW wind turbines.

It is important "to understand if undertaking heavy-component changes offshore is practical and cost effective", says Dan Kyle Spearman, the Carbon Trust’s manager for offshore wind.

Most floating platforms are designed to be disconnected and towed back to port for major interventions, or to sheltered waters in the case of spar designs, such as Hywind Scotland’s.

How easy and costly this is depends on myriad factors, including the type of floater, the disconnection and reconnection process, how sensitive it is to metocean conditions, and the distance to shore. 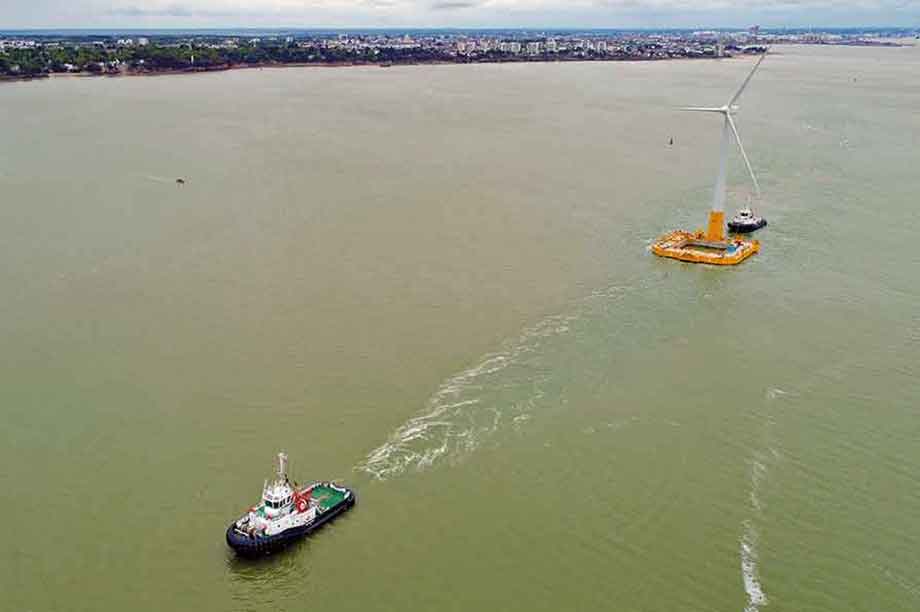 To tow or not to tow? Disconnecting and towing a floating turbine to port for repairs may be a good option in some cases (pic: Ideol/BYTP/Centrale Nantes)

To disconnect or reconnect Principle Power’s WindFloat semi-submersible platform, for example, takes less than 24 hours and can be achieved at significant wave heights up to 1.5-2 metres, says Guillaume Ardoise, senior development manager at Principle Power. Towing to port progresses at a stately three knots.

Once docked, maintenance teams will require adequate water depths, space at the quayside and suitable cranes or a jack-up vessel nearby to provide the required height. If multiple turbines are involved, they also need space for wet storage.

Some industry experts, including former Siemens chief technology officer Henrik Stiesdal, believe that all heavy maintenance will be performed at sea, with the turbines never having to be brought back to port.

"We already have the technology today so that, if we are willing to wait for a quiet day with no swell, it can be done at sea, for example using a land-based crane on a barge in some cases," he argues.

This is "an order of magnitude less complex" than disconnecting and towing the floater to shore, and then reconnecting it, he says.

However, other observers argue that carrying out the work in-situ offshore faces some serious challenges, even for today’s 6-10MW turbines.

Heavy-lift vessels (HLV) are less readily available and far more expensive than tugs, with a jack-up vessel costing, on average, €70,000-90,000 a day for maintenance of existing fixed-foundation turbines.

They are expected to cost considerably more for when used for heavy maintenance at floating projects. Then there’s the issue of managing heavy-lift operations between two floating bodies.

Among other things, this means more constrained weather windows, plus the added complication of limits on motion tolerances specified by turbine manufacturers.

That said, vessels are evolving, with advances in dynamic positioning (DP) and combined heave and surge compensation. Demand is partly driven by the fixed-foundation market, which will need larger vessels to handle next-generation 12-15MW turbines. These may well be DP vessels, which do not need time to jack-up and are not constrained by seabed conditions.

While it takes a long time for new vessels to be designed and built, and owners need a strong business case before investing, the prospect of serving both the floating and fixed-foundation markets could be an advantage, Spearman notes.

And such vessels could be cheaper than today’s largest heavy-lift DP vessels, such as the Saipem 7000. These were primarily designed for the oil and gas market, and are somewhat over-specced for floating wind. Apart from the all-important motion compensation, the floating market’s main concern is having cranes of sufficient reach and height.

Other technological advances are in the pipeline. These include Lagerwey’s self-climbing crane and Vestas’s tower crane, both inititally developed for the onshore market, plus Royal IHC’s taut wire transfer system.

The Vestas and Royal IHC concepts allow components to be lowered from the nacelle to the platform and then lifted on to a vessel, or lowered directly on to the vessel.

This requires smaller, less costly vessels and cranes, and would be less sensitive to metocean conditions.

These technologies are at an early stage, and those that involve adapting the nacelle or tower will need the cooperation of OEMs, Spearman points out.

However, he believes manufacturers are becoming more receptive to such ideas.

These adaptations could be efficiently integrated into new products as they are "already making some quite considerable modifications as part of the design for larger turbines", he says.

In the end, both approaches will no doubt be used, at least in the short-to-medium term. In some cases it will make economic sense to tow the turbine to port, in others to do the work in-situ.

The decision will largely depend on the nature of the work and how many turbines are affected, argues Thomas Choisnet, Ideol’s chief technology officer.

For one-off events, such as a random gearbox failure, it might be cheaper to do the repair in-situ, especially if a suitable HLV is available nearby.

But in the worst-case scenario of multiple failures due to some design or production fault, the mobilisation cost of the tugs and anchor-handling vessels could be spread over multiple operations, with the vessels in constant use, bringing turbines back to port and taking repaired units back out again, Choisnet explains.

The removal of the faulty components would have to be carefully phased with the delivery, transfer and installation of the replacements, perhaps with the help of feeder vessels to optimise the process. And all within restricted weather windows.

For Ardoise, everything points to offering maximum flexibility as the market evolves alongside the economic and industrial context.

"What will drive the appetite for [developing] new solutions will be the ease of operations offshore and the weather window required," he says.