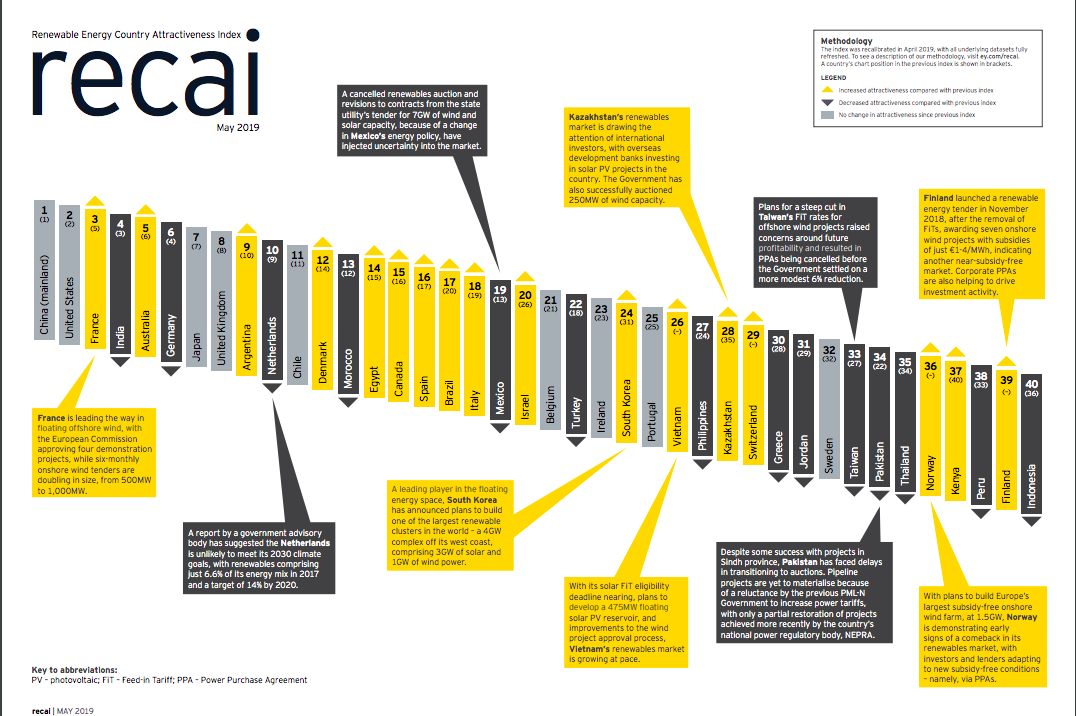 The latest issue of the biannual rankings places India as the fourth most attractive market, down from third place in November.

EY said the high level of auctioned capacity in India was encouraging, but doubts remain over whether the build-out is possible.

Germany meanwhile slipped from fourth to sixth as installation rates plummet and permitting delays persist, usurped by Australia in fifth, and France now in third.

China and the US retained the top two spots.

The RECAI report ranks 40 countries on the attractiveness of their renewable energy investment and deployment opportunities. It has been published for 17 years.

EY said the leap of France from fifth to third in the last six months was due to the "new focus on floating offshore wind and doubling of its annual targets for onshore wind capacity additions".

The UK retained its eighth position because of the new offshore wind sector deal signed in February, EY said.

Ben Warren, EY global power & utilities corporate finance leader and chief editor of the rankings, said the deal was "extremely positive news" but the continued rejection of support for onshore wind has slowed the sector’s growth.

Indeed, the UK is joint-first with China and the US for investment attractiveness in the offshore wind space, but it is in the other technologies that reflects its position in EY’s final table.

For example it ranks lowest among the overall top ten countries in the solar sectors.

"The lack of support for the Swansea Tidal Lagoon, and changes to network charges — which have been favouring decentralised renewables, energy storage and demand-side response — will hamper investment in the [UK's] sector going forward," EY added.

Japan kept its seventh place, while Argentina and the Netherlands at number nine and ten, respectively, swapped places compared with EY’s previous rankings.

Among some of the biggest climbers in the rest of the top 40, Vietnam is a new entrant in the latest rankings, coming in at 26.

EY said this was mostly due to advancements in solar development, but the permitting process has also been improved for wind. "Vietnam’s renewables market is growing at pace," EY said.

South Korea also entered the top 30, climbing from 31st to 24th, due to plans to build a 4GW renewable energy cluster, which could feature 1GW of wind power.

Kazakhstan leapt from 35th to 28th in the latest table, thanks to greater interest from overseas investment in solar, as well as the auction of 250MW of wind capacity.

Some of the biggest fallers in attractiveness include Mexico, whose reputation was damaged by the cancellation of the renewables auction at the turn of the year by its new government. Mexico fell from 13th to 19th in the latest rankings.

Similarly, Taiwan slipped from 27th to 33rd after the agreement to cut offshore wind feed-in tariff rates by 6% for 2019 contracts.