More than 8GW of onshore wind capacity, which provides about 20TWh of power, will reach the end of its expected 25-year lifetime by 2040, said trade group RenewableUK.

And as energy demand rises and as other generation facilities retire, the UK will be about 60TWh short of meeting its climate obligations by 2030, according to the UK’s Committee on Climate Change (CCC).

But successful onshore wind repowering could meet just under half of this deficit (29.12TWh) with optimal conditions, RenewableUK's analysis found.

The UK is due to miss its climate obligations under the fourth and fifth carbon budgets — two five-year plans, setting a course for the UK through to 2032, as it tries to reduce emissions by at least 80% of 1990 levels by 2050.

This deficit will occur despite the expected commissioning of the Hinkley Point C nuclear plant as well as renewable projects already funded through the UK’s contract for differences (CfD) support scheme.

Repowering of onshore wind farms could provide half of the clean energy needed to plug this gap, but only if positive policy changes are made, RenewableUK stated. 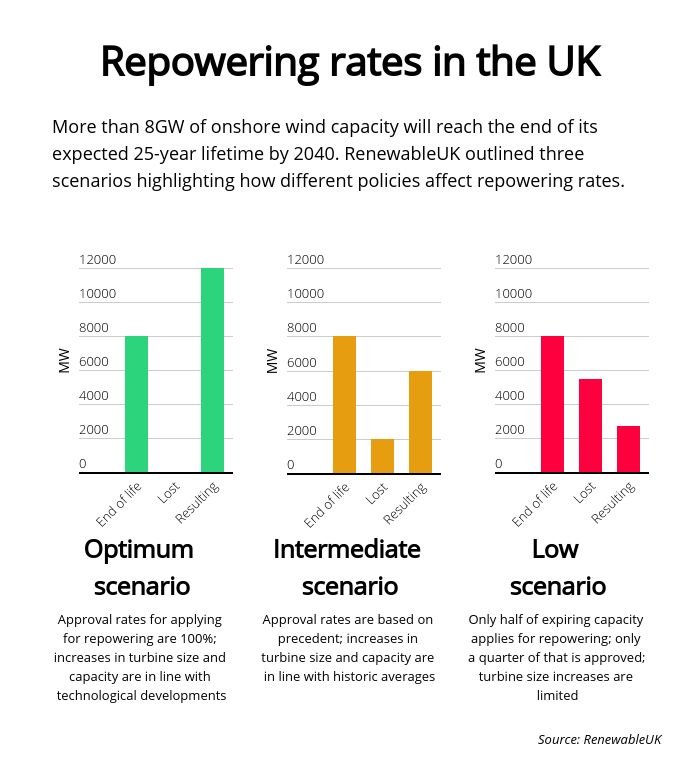 Under the group’s ‘optimum scenario’, the owners all 8GW of capacity approaching the end of its life would apply for repowering.

All of these applications would be approved, and turbine sizes and power ratings would increase in line with current technological development.

This would result in 12.03GW of repowered capacity, RenewableUK forecast.

However, policies encouraging repowering — including commitments to maintain current capacity levels — will be needed, the group argued.

Under the current regulatory climate, in which planning approval rates to 2030 and turbine size and capacity increases are consistent with historical rates, a net 6.03GW would remain after repowering — meaning a loss of 2GW.

This would meet just under a quarter of the 60TWh deficit forecast by the CCC.

RenewableUK claimed tip height increases of repowered UK projects are limited, there is currently a lack of visibility around planning process, and permitting conditions for wind farms often require the site to be decommissioned and restored to previous use.

These factors all hinder the potential of repowering UK wind farms, the group said.

Even with these obstacles, a study by Cardiff University in 2018 found repowering boosted the capacity of 23 onshore wind farms by 171% on average, while reducing the number of turbines by 24%.

RenewableUK added if further obstacles are created, however, with turbine size increases further restricted, fewer project owners would apply for repowering and fewer permitting approvals would be granted.

In RenewableUK’s ‘low scenario’ owners of only half of the 8GW of capacity approaching the end of its life would apply for repowering and only a quarter (1GW) of those applications would be approved.

Under this scenario only 2.76GW of the original 8GW of capacity would remain after repowering, resulting in a loss of 5.24GW.

This would generate 6.65TWh, or just over a tenth of the deficit.

"Upgrading our infrastructure with modern onshore turbines is good for consumers, as onshore wind is the cheapest form of new electricity available, and brings investment to communities around the UK," Pinchbeck added.