In 2018, local wind or solar PV projects could have provided the same amount of electricity at a lower cost than 211GW (74%) of the existing coal fleet in the US, renewables analysis firm Energy Innovation found.

New wind farms could have accounted for 118GW of this total in 2018 — though this figure includes capacity overlapping with solar PV’s potential to replace 179GW of coal capacity.

Of the 211GW found to be at economic risk from new, local wind and solar PV in 2018, 94GW of coal capacity could have been undercut on cost by at least 25% of the plant’s ongoing marginal costs.

This figure includes 49GW of potential wind projects capable of offering this saving, and 69GW of solar PV (see table below).

By 2025, even more coal plants could be at risk of being undercut by renewable energy sources, with wind and solar PV capable of replacing 246GW of the US’s coal fleet (86%) at a lower cost, Energy Innovation found.

Of the 246GW deemed to be at economic risk from new wind and solar PV by 2025, 140GW of coal capacity could have been undercut on cost by at least 25% of the plant’s ongoing marginal costs.

This figure includes 76GW of potential wind projects capable of offering this saving, and 111GW of solar PV.

The analysts added a limitation of their study was that it only considered generation on an annual basis, rather than taking into account dispatch timing — a factor in which coal still has an edge over variable sources of energy like wind and solar PV.

They stated that before deciding to replace coal plants, further modelling of grid impacts and alternative sources of reliability services were needed.

The possibility that even cheaper renewable replacements could be sourced from outside the 56-km radius used in the study should also be considered.

However, the analysts concluded that wind and solar PV’s cost-competitiveness raises "substantial questions" for regulators and utilities as to why these coal plants should keep running instead of new renewable power plants.

Energy Innovation added: "Local decision-makers should consider plans for a smooth shut-down of these old plants — assessing their options for reliable replacement of that electricity, as well as financial options for communities dependent on those plants."

By comparison, newly commissioned wind farms in 2018 wind projects could have operates at between €13/MWh and €88/MWh, based on locational resource quality.

However, this range would have been stretched by a "high number of very costly outliers in windless regions", the analysts noted. 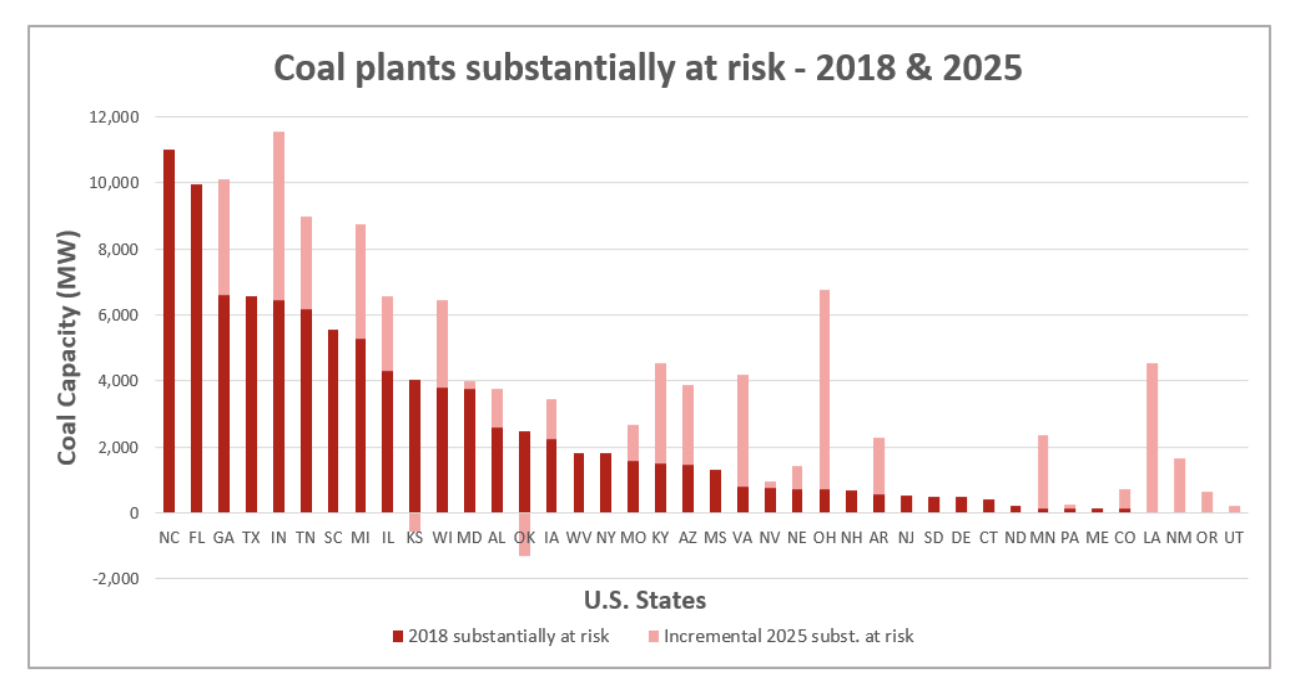 Energy Innovation found that in 2018 North Carolina had the highest capacity of at-risk coal plants (above), followed by Florida, Georgia and Texas.

However, such plants get much of their revenue from capacity markets unfriendly to variable energy sources because they make no allowances for seasonal performances of time-of day value.

Almost all coal plants in south-east and many in the Midwestern states are also at risk to being undercut by wind and solar PV, Energy Innovation found.

"Much of the US coal fleet is simply becoming uneconomic and analysts, utilities, other stakeholders, regulators and policymakers need to take a critical look at each and  every coal plant in their jurisdiction," the analysts concluded.