From a distance, the E-138 bears a striking resemblance to the 500kW E-40 turbine introduced in 1992. The disk-shaped, air-cooled generator, much larger on the new model, is again a prominent visual system element.

"These first modules arrived fully factory-assembled and pre-commissioned onsite, while the generator comes in three rotor sections, with the main bearing unit already mounted, and the stator in two 180-degree segments."

Zur Mühlen adds that the new manufacturing, transport-logistics and installation set-up for the EP3 has allowed the speeding-up of all processes at construction sites. "Under ideal conditions, the nacelle, generator, rotor hub and blades can be assembled in five days," he says.

The prototype is mounted on a one-off concrete-steel "next-generation" tower with a hub height of 131 metres. The concrete part is a combination of modular, standardised cylindrical and coning concrete elements, supplemented by tubular steel sectors.

Serial E-138 turbines will come with 81- and 111-metre tubular steel towers, although there are several alternative options for hub heights of 131 and 160 metres. A 131-metre option for complex sites is Lagerwey’s modular steel tower (MST). For a 99-turbine project in Canada, tubular steel towers with a wide 4.9-metre base (the normal limit is 4.3 metres) will be deployed. 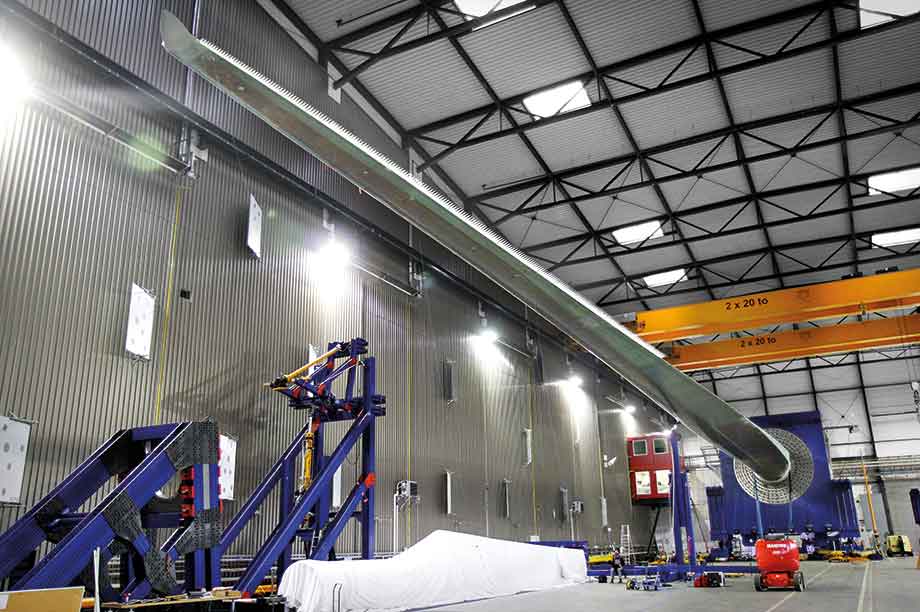 The E-138 features 66.8-metre single-piece blades with a new in-house aerofoil design, and without carbon incorporated. Enercon’s characteristc wide inner-blade spoiler has been left out, but the new blade retains a tip winglet (see image, right), although this is smaller than on the EP4 blade.

The blade root has Enercon’s usual double row of mounting studs, whereby a steel blade-adapter placed between the blade root and blade bearing aims to create a "rigid load-carrying interface".

The delivery of the new blades represented a fresh challenge for Enercon’s logistics department, which up to then had only transported shorter, segmented blade sections, or single-piece blades up to 49 metres in length.

"We evaluated several options and selected a solution from tranport specialist Goldhofer, which has a mechanical linkage between the truck-turntable and the expandable self-steering trailer," says zur Mühlen.
"The fully tested and validated solution was deployed for the first time to transport E-138 blades to the Wieringermeer test site. The trailer incorporates advanced hydraulics for raising and lowering either individual blade ends or a full blade under demanding conditions, like narrow roads with sharp bends, or motorway entry and exits." 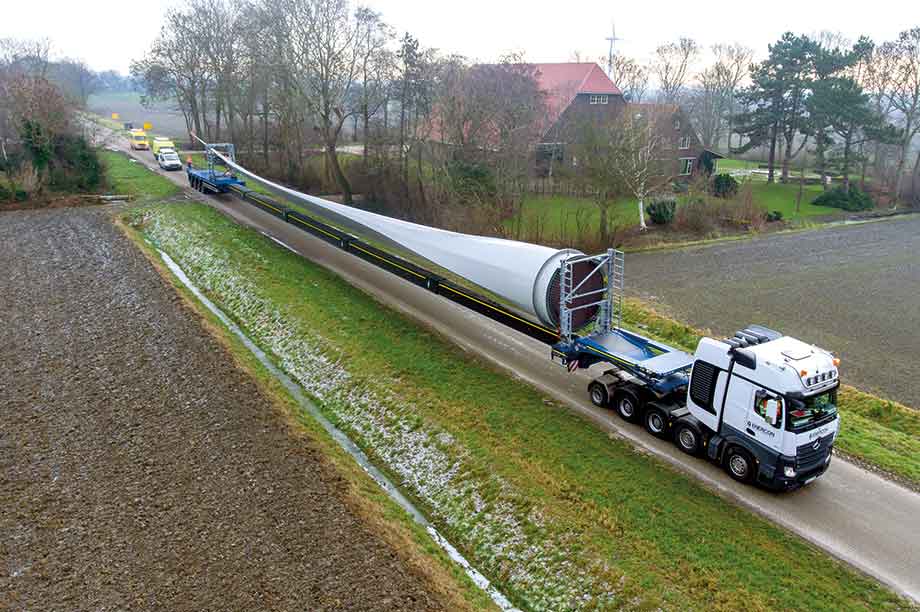 Delivering the 66.8-metre single piece blades was a challenge for the logistics team (photos: Klaas Eissens/Enercon)

The E-138 EP3 is the first Enercon turbine to operate at 690V electrical level, succeeding the previously standard 400V voltage, and it incorporates a new in-house developed active power-electronic converter. This increased electrical system efficiency has helped to further reduce head mass compared with the E-126 EP3, by about 6 tonnes to 250 tonnes.

"This has been achieved by reducing generator volume and mass and, despite a lower rotational speed, and with higher torque due to the E-138’s longer blades," says zur Mühlen. "Testing of the electrical, power electronic and other E-138 main components started last autumn and is ongoing.

"Of the two sister models, this task requires the most time for full tests and validation, because it is the most comprehensive product development. Another positive outcome of the E-126 EP3 generator testing was that the air-gap size under load proved very stable and uniform."

The E-138 prototype installation was preceded last August by an E-126 with a 127-metre rotor and enhanced 4MW rating, in the north-east German state of Mecklenburg Vorpommern. A second E-126 EP3 prototype is now operating in central Germany, while a third is planned in Austria atop a MST. Commerical EP3 ramp-up is now in full swing, and zur Mühlen expects high volumes of both the E-126 and E-138 during the course of 2019. 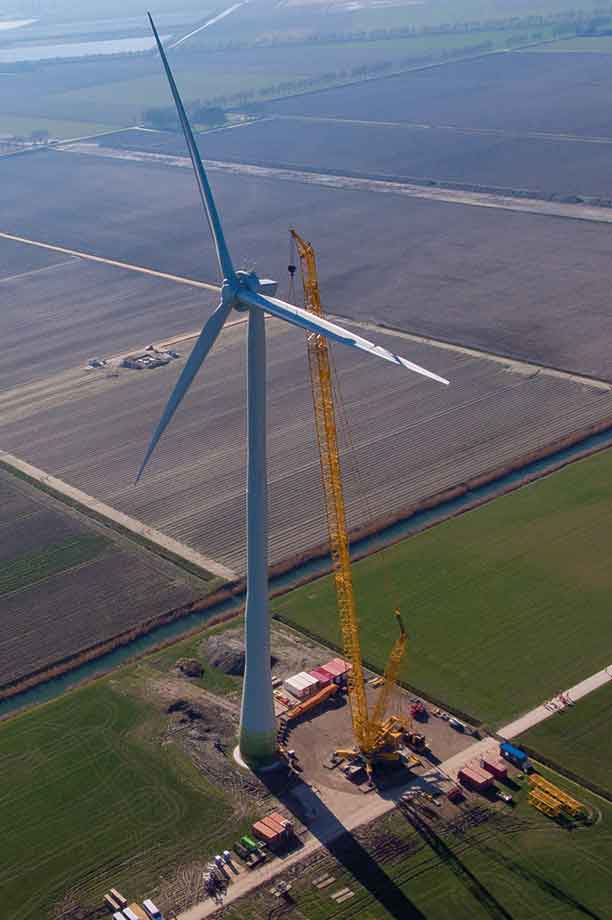 The next planned EP3 platform addition is the E-138 E2 with an enhanced rating of 4.2MW, he adds. A prototype should be operating by the end of this year, with serial production starting in 2020.

"This enhanced model version focuses on specific markets like Germany, and favourable IEC IIIA stites with 6.5m/s mean wind speeds," says zur Mühlen. "Under these conditions it offers up to 10% higher yield levels than the 3.5MW E-138. Our engineers have also developed a faster optimised single-blade installation method for E2 models, and site-specific hub heights of up to 149 metres."

The E-115 EP3, aimed at IEC IA+ sites, completes the new platform range and will be available in 3MW "silent mode", 3.5MW and 4.0MW ratings. The IEC IA+ class means certification to withstand wind speeds above normal IEC I reqirements, essential for typhoon-prone markets such as Japan. A prototoype is planned for the third quarter of 2019.

This is a crucial year in many respects for Enercon, now undergoing its second major technology transition since the firm was established in 1984.

In 1992, founder Aloys Wobben introduced the groundbreaking 500kW E-40, which brought a full switch from high-speed geared to direct-drive technology. The second technology transition started three years ago with the development of the compact, lightweight EP3 platform, followed by the acquisition of Lagerwey in late 2017.

The Enercon EP3 and Lagerwey LP4 platforms show a remarkable resemblance in drive and structural technology choices, apart from the generators. Both compact direct-drive designs feature an inner-rotor generator at the 690V level and incorporate a main bearing unit with a hollow shaft and two pre-stressed taper-roller bearings. Each concept allows easy service access to the rotor hub.

While functionally similar, the Lagerwey PMG has a diameter of "only" 5.5 metres and is mainly passive air-cooled. The main bearing solution has, by comparison, a longer hollow shaft, much smaller bearing interspacing, and uses oil lubrication. Enercon’s EP3 uses a conventional externally excited generator, smaller-size bearing spaced further apart, and grease lubrication.

Prior to the takeover, Lagerwey had installed two 4.5MW L136 prototypes for IEC IIA conditions. A senior spokesperson said the full L136 structural design had been calculated for a future rotor of 158 metres for IEC IIIA sites, but that it would not appear before 2019. In 2017 Enercon had planned a low- and medium-wind addition to its EP4 range, and a wider focus on expanding its turbine portfolio for the increasingly important IEC IIIA segment, where it was not well represented. 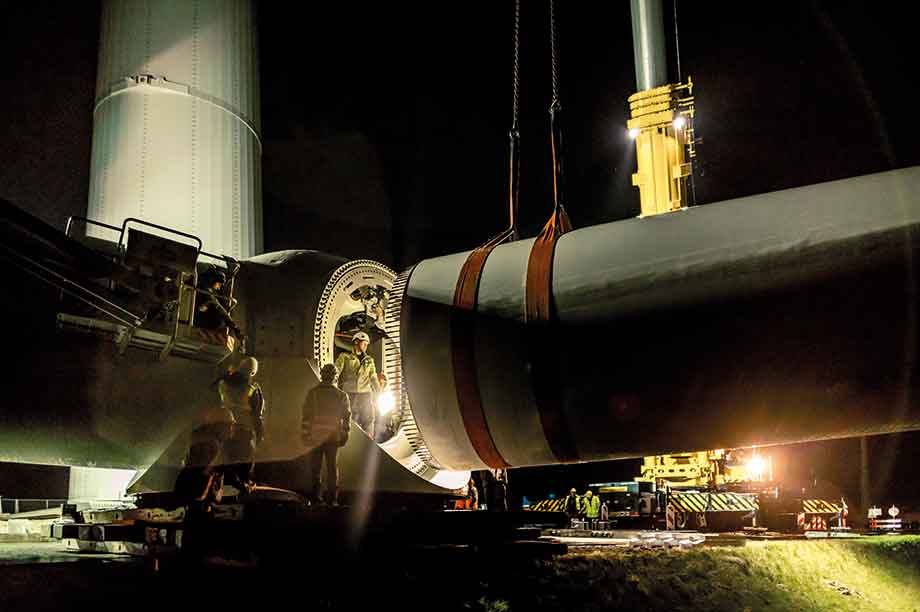 Lagerwey had installed two 4.5MW L136 prototypes before it was bought by Enercon

The Enercon-Lagerwey product-market strategy has a big emphasis on the highly competitive 4-5MW-plus class. Enercon’s "classic" EP4 platform is no longer an active part of the company’s portfolio, so the company’s drive in this segment is now spearheaded by the new 4.3MW Lagerwey L147 LP4 with a 147-metre rotor for IEC IIA, and the L160 for IEC IIIA with "at least 4MW". The initial 4.5MW L136 is upgraded to IEC IA.

With 4-5MW-plus onshore developments evolving at a breathtaking pace — now with up to 5.6MW ratings and 162-metre rotors — a valid question is whether Enercon should react to this trend for upscaling power ratings.

In other words, would it be it beneficial to increase current ratings by several hundred kilowatts for the L136 and L147, and perhaps an even bigger jump for the L160 flagship model? Considering the latest product portfolios from competitors, and Enercon’s own long-term scaling and optimising strategy, it seems justified to assume that some significant rating-upgrade announcements can be expected, sooner rather than later.