The Cimarron Bend onshore wind project in Kansas is not the largest wind farm in the US, let alone the world.

But with an operating capacity of 400MW, distributed over 243km2 of land, it still ranks among the top 25 of super-sized wind-energy developments installed in the past ten years (see table), according to Windower Intelligence (WPI), the data and research division of Windpower Monthly.

Fully commissioned in 2017, Cimarron Bend conforms to most of the current trends in very large-scale onshore wind construction and operation.

Start with the geography: it is located in the Great Plains of the American mid-west, where land is plentiful and the wind resources are good.

More than a third of the 70 300MW-plus wind farms installed worlwide since the start of 2009 are sited in the US, and nearly all of those are within these region.

Wind projects on a power-station scale are not for the faint-hearted or the shallow-pocketed. The companies behind Cimarron Bend have substantial track records in renewable energy development.

It is owned by Enel Green Power North America, a division of the Italy-based Enel Group, which boasts a global portfolio of 7.4GW of wind capacity among 38.4GW of renewables assets.

On-site work was contracted to TradeWind Energy, one of the largest independent wind, solar and storage developers in the US, responsible for 1,274MW of the 7,017MW commissioned in the country during 2017, according to the American Wind Energy Association.

And the financial backers for this $610 million project include household names — Bank of America Merrill Lynch, JP Morgan, and the MetLife insurance corporation.

The hardware employed at Cimarron Bend is of the tried-and-tested rather than cutting-edge sort. Power is generated by 200 Vestas V110-2.0MW turbines, a recently developed variant of a platform launched nearly 20 years ago — and the single most installed model in the US in the past two years.

This is one of the industry’s most successful designs, a machine that is well known to engineers and technicians, with more than 20,000 units in operation worldwide, and an established supply chain in parts for repair and replacement.

The logistical demands in transport and installation of the turbine are well understood, together with its operating track record.

It’s the low-risk, low capital-cost option, ticking all the right boxes for deployment on a large scale. 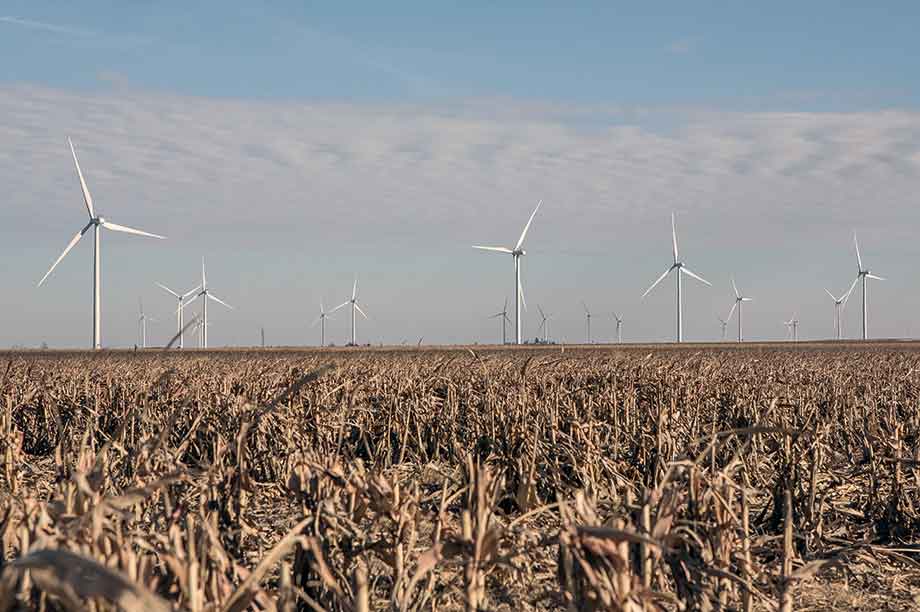 Crucially too, Cimarron Bend has solid customers for its output.

The electricity it generates is sold to Google and the Kansas City Board of Public Utilities under two 200MW long-term bundled power purchase agreements.

The project was expected to be interconnected to Clean Line’s Grain Belt Express transmission line, intended to transmit Kansas wind power to the east, but Clean Line’s recent demise has cast doubt on when and whether that might happen.

The $610 million investment to build Cimarron Wind works out at $1,525/kW, just below the average capital costs for 200MW-plus projects in the US in 2017, according to the Lawrence Berkeley National Laboratory’s Wind Technologies Market Report, as the chart and table below illustrate.

The Berkeley Labs report highlights the dramatic fall in capital costs with the size of wind developments, dropping from an average of $3,220/kW for projects up to 5MW, to $1,549/kW for wind farms of 200MW or more.

The biggest savings for wind asset owners are to be found in the turbines, which account for roughly 60% of project capital costs, depending on location and specification.

But further costs reductions can be found in the interest rates charged by investors, which tend to be lower for large blue-chip projects, and in the planning process and balance-of-plant costs.

Electrical substation costs, in terms of money per megawatt, are also likely to be relatively cheaper for big wind farms.

WPI data point towards steady growth both in the number of large-scale wind projects installed annually, and in their average capacity.

In the five years following that, this rose to 42.

The average capacity of the ten biggest wind projects installed in 2009 was 279MW, climbing to 338MW in 2018, with a peak of 412MW in 2012, driven by two huge developments — the 845MW Shepherds Flat project in Oregon, US, and the Fântânele-Cogealac wind farm in Romania, still Europe’s largest.

Predictably, China and the US are the clear leaders in very large-scale projects, between them accounting for 61 of the 70 300MW-plus wind farms installed over the past decade.

China has the lion’s share with 37, mostly located in Inner Mongolia and Gansu province, while the US is home to 24 projects of this size.

There is only one in Canada — EDF EN’s 300MW Blackspring Ridge 1 wind farm in Alberta, commissioned in 2014.

Africa has three 300MW-plus wind farms, one apiece in Egypt, Morocco and Kenya.

The 545MW Zafarana project in Egypt is the largest, and probably the most complicated to operate, being equipped with no fewer than 700 sub-1MW turbines from three different manufacturers (Siemens Gamesa, Vestas and Nordex).

Australia and India are seen as likely candidates for large-scale wind developments in the near future, but each currently has only one operating wind farm exceeding the 300MW mark.

The biggest onshore wind farm built in Germany, the continent’s largest market, in the past ten years is the 163MW Havelland project in Brandenburg.

Roan-Fosen is 64% of the capacity of Cimarron Bend, but has only 35% of the number of turbines through its use of 3.6MW Vestas machines.