Developers of onshore wind farms could miss out on the opportunity to use larger turbines and improved technology capable of reducing projects’ levelised cost of energy (LCOE), consultancy Cornwall Insight suggested.

While the LCOE of both onshore and offshore wind are expected to fall, the latter is expected to become cheaper at a faster rate, due to developers being able to leverage technological improvements.

Cornwall Insight forecasts the cost of offshore wind to fall below that of onshore wind in 2028 (see below). 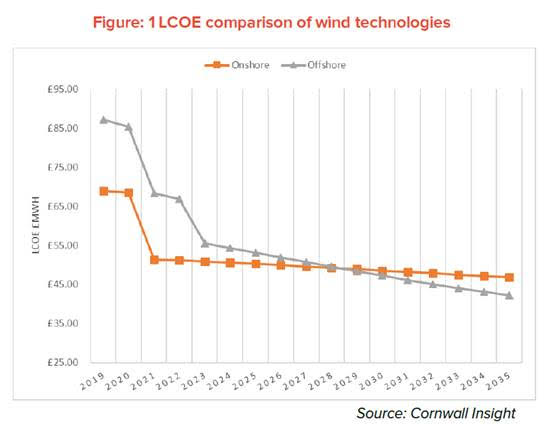 As technology improves and economies of scale increase become larger, it is "inevitable that costs will fall", Tom Edwards, a senior modeller at Cornwall Insight said.

"While restrictions on onshore wind turbine height are maintained, projects will be unable to take advantage of these improvements to reduce costs.

"For onshore wind to keep pace with its offshore counterpart, planning decisions will need to be relaxed.

"This will not only to benefit consumers with cheaper cleaner energy but help the government towards its decarbonisation targets, not only in terms of facilitating the best conditions for new build onshore wind but also allowing existing sites to be repowered optimally," he added.

The consultancy’s onshore wind cost reduction taskforce found that LCOE savings of between £4/MWh (€4.62/MWh) and £7/MWh (€8.09/MWh) are possible for onshore wind with optimised tip heights and rotor diameters.

Latest turbine specifications claim to improve load factors by up to 26% helping to reduce LCOE.

But with an unofficial glass ceiling on turbine tip heights, cost reductions for onshore wind in the UK could proceed at a slower pace, Cornwall Insight argued.

While there is no legal limit on tip heights, it has proven difficult to obtain planning approval for turbines taller than 125 metres, he said.

This is because planning committees often considered projects featuring taller turbines had a detrimental effect on the landscape.

Parker added that Innogy did not face such issues in other European markets, such as Germany and the Netherlands.

"Each site will obviously be different, but once you start getting to 150-metre-plus (tip heights), you are getting to use big rotors" that are able to operate in a merchant market, Parker said.

He added that Innogy was currently awaiting approval to use taller turbines at its Alwen Forest site, which is currently under development in north Wales.

If approved, using larger, more powerful turbines could enable the project to be Innogy's first subsidy-free site in the UK, Parker said.