Business is brisk again in India’s wind sector, following a difficult transition period in 2017 from a feed-in tariff to today’s competitive auction system with huge downward pressures on Capex and the levelised cost of energy. The volumes are back in the country, according to Kymal, but margins are still small.

"A major challenge is how to continue to make renewables more cost-effective," he says.

"The pressure is on, because India has committed itself to 40% non-fossil based energy by 2030, and soon there will be a carbon tax as well.

"The country’s onshore wind-power potential is about 300GW at 100-metre hub height, of which only 35GW has been tapped, and with ample land available to build new wind farms."

The volume may be there, but recent auction prices have dropped to such a low level that only wind projects in Gujarat and Tamil Nadu are feasible due to the two states’ good wind resources and load factors.

However, following a few years of rapid development, these states increasingly struggle with a lack of grid connection points. Land allocation is also becoming an issue for developers in Gujarat.

Wind speeds in most other parts of India are generally low, typically in the lower-range IEC III and ultra-low IEC IV class. But fitting larger rotors can combat unfavourable wind speeds.

The prevalence of low auction prices, which look like they are here to stay, gives suppliers an additional incentive to accelerate the development of specific low-wind turbine configurations for the Indian market.

"In the past, we would introduce a new turbine model every three to four years, but rapid changes in market conditions have cut this to around once every two years," says Kymal.

"Another trend is that the Indian market is switching to higher, 3MW-plus ratings. SGRE is working on such a next–generation turbine, but it is too early to share specific details."

For transporting tubular steel towers by road, the country allows a maximum outer diameter of around five metres, compared with the 4.2-4.5 metres typical in Europe.

This larger tower base enables manufacturers to build cheaper towers in tubular steel with hub heights of more than 135 meters, or a hybrid tower with a tubular steel upper section and a lattice-steel bottom part.

The 2.1MW SG 2.1-114 (196 W/m2) is SGRE’s current workhorse model for India, with nacelles assembled in Chennai and blade manufacture across two production lines at the Nellore plant and four in Halol.

Production of the G97-2.0MW has been discontinued.

A milestone for the Indian organisation was that the 2.1MW SG 2.1-122 is designed specifically for the country’s low-wind conditions and a prototype (180W/m2) was installed in the country in June 2018.

The nacelle dimensions and internals remained largely unchanged, except for a strengthened gearbox and other optimisations due to the increased loads.

Blade production for the SG 2.1-122 has started to ramp up at Halol for the first 400MW of projects to be operational by June 2019.

Only a small proportion of the total available area of the plot is currently built up.

The location is close to a commercial port about 45km away and accessible via a highway network, explains Ravichandran Narasimman, head of industrial operations.

"Our core activity here at the moment is blade manufacturing, but we also started assembling generators and solar inverters.

"The solar inverters are an ‘offspring’ of SGRE’s turbine converter technology, with a current annual capacity of more than 2200MW in Nellore and a huge market potential in India," he says (see Just add sunshine, below).

Generator output is now one unit per shift but can be ramped up quickly. The facility also has an advanced test stand to carry out full generator tests and serial tests.

SG 2.1-114 blades are produced at two parallel production lines inside one of the two large, climate-controlled two-storey production halls. Continuous effort is put into improving the production process in terms of output and efficiency.

"Mould-cycle time has been cut from an initial 60 hours to 32 hours and is now 28 hours," says Narasimman.

"Our next goal is 24 hours, which would allow producing each new blade in a three-shift 24-hour system, with better line utilisation and extra cost savings.

"We produce 300 blades per mould annually here, and our total blade manufacturing capacity in India largely covers SGRE’s local blade demand. If needed, there is still ample room for expansion in Nellore."

A huge mould in the second blade hall had been used to make six 71-metre blades for SGRE’s latest SG 4.5-145 prototype.

Five ready blades are awaiting transportation and shipment within the next days. Three of these will go to Spain to be fitted on to the prototype turbine in March.

"Blade number six was sliced into many cross-sectional pieces to study the material and other properties of the composite along the entire blade length," Narasimman says.

"Our core team of blade specialists, together with a third party, developed a robotised system to finish the blade root, including milling, flattening, polishing, and drilling the T-bolt holes. This is only one example of several production automation measures we introduce regularly." 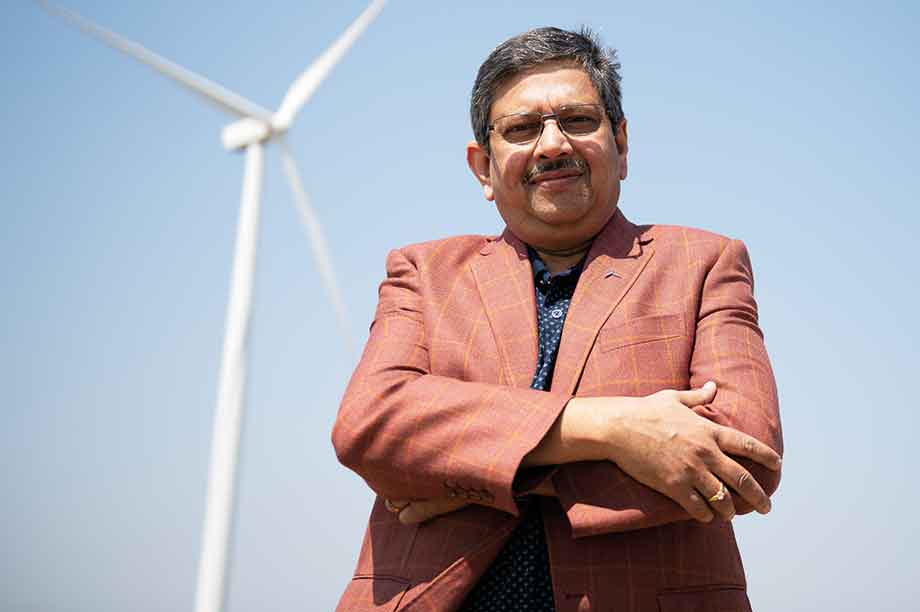 Wind-solar hybrid systems are a new key business focus for SGRE. "We were the first to commission a commercial-level hybrid project for a leading independent power producer in India," says Ramesh Kymal (above), who heads the company’s Indian onshore business.

"We’re also involved in a very large scale wind-solar hybrid research project for NTPC in the state of Karnataka, and plan to build more projects in the years to come."

Hybrid projects are a growing segment in India.

A leading independent power producer in the country is planning a mega hybrid project of more than 8GW, combining wind, solar and pumped storage. The first phase of 2.75GW has been approved and is expected to be operational in the next four years.

SGRE has also developed a solar water-purification system because access to clean water is a big issue in India.

"There is a good demand for such systems in parts of rural India without access to electricity, and we are exploring options to further expand the reach of this system across the country."

Kymal calls for caution regarding the pace of offshore wind development in India. It is still three times as expensive compared with onshore wind, and the first real projects are likely four to five years away, he argues.

Much of this is down to the country’s coastline, Kymal points out: "First, there are mountain ridges along the west coasts of Kerala up to Gujarat state bordering the Arabian Sea.

"These rock formations slow down wind blowing over land from the east. And the water is deep, requiring cost-effective next-generation floating turbines.

"However, this technology is not available yet. Along the south-eastern coastline, wind speeds are much better, but it is a cyclone-prone operating environment requiring special turbine adaptation."

In the short to medium term, Kymal sees the best good prospects for a narrow sea-lane between Tamil Nadu and Sri Lanka, but with a total potential of only 5-8GW.