The jet stream – the west-to-east winds that determine the continent’s weather – had been unusually far north in the summer, allowing high pressure to build up in western Europe. Analysts at Vaisala have suggested this may have negatively impacted the performance of wind farms across Europe. 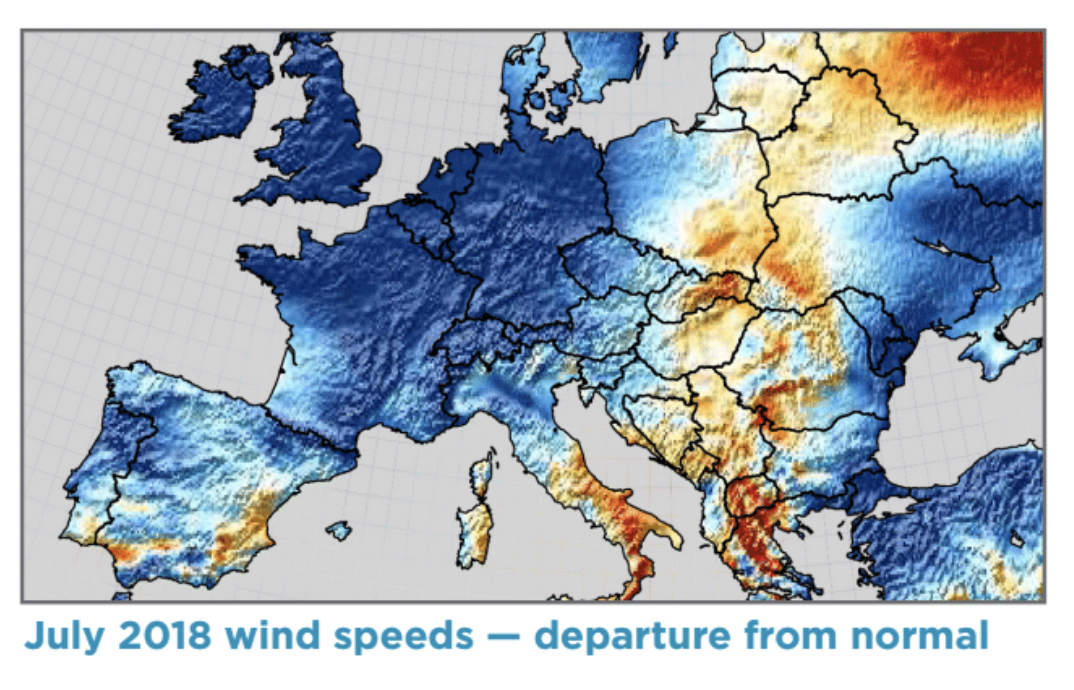 In some markets, available wind resources in July dropped by as much as 20% below long-term averages. Meanwhile, solar irradiance in many of the same areas was up to 20% above these averages, Vaisala’s wind and solar performance maps show.

Following publication of a batch of third-quarter financial reports, it is possible to explore which of Europe's wind developers were most affected by the summer weathers.

The results are mixed. Some developers have claimed lower wind resources cut performance of their assets in Q3, hitting their revenues as a result.

Others, however, have played down the effect of the wind drought. While noting lower wind speeds, they claimed this was not exceptionally abnormal, and that the wind drought had only a minimal impact on their projects and their balance sheets.

Low offshore wind and hydropower yields reduced EnBW’s earnings from renewables in the first nine months of the year, the utility-developer stated.

Though the company did not provide production figures for either its wind or hydropower assets, it cited lower yields as a driving factor behind a 4.1% year-on-year drop in earnings.

Boralex’s net losses widened in the first nine months of the year, primarily due to lower production at existing facilities, it stated. The developer also cited amortisation expenses, acquisition costs and financing costs.

Its production inched up from 2,258GWh to 2,350GWh in the first nine months of 2018, despite a 9.4% year-on-year fall in the third quarter to 548GWh. The company noted "less favourable" conditions for its wind farms in France as well as for its hydroelectric projects in the US and Canada.

Innogy too blamed "particularly low" wind levels in the UK and Germany as its nine-month renewables earnings fell year on year.

Production from its renewable assets actually inched up from 6.2TWh to 6.3TWh in this period, mirroring an increase in total capacity. However, it claimed poor winds restricted output in the second and third quarters of the year, leading to the "reduced utilisation of existing plants".

Vaisala suggested the drop in output experienced by some developers illustrates the need for a diversified, ‘climate-resilient’ portfolio of both wind and solar projects

Low water levels – also caused by the northerly jet stream – affected companies on the supply side too, delaying construction of foundations for wind farms.

Sif Group made an operating loss in the third quarter due to a delayed start to the production of foundations for Borssele III and IV, as well as a "relatively high absence rate due to illness".

It cited "delays in the supply of steel" and "the extremely low water levels in various rivers" in the third quarter as production levels fell to 19,000 tonnes, down 67.7% year on year and 63.4% quarter on quarter

The foundation specialist added that it would "seek compensation for the financial consequences of factors beyond its control".

Ørsted, however, told Windpower Monthly that while it noted low wind speeds in speeds over summer, these were "within the normal fluctuations in a 20-year view". Further, a spokesperson described wind fluctuation as a "normal operating risk".

In a conference call following the developer’s third-quarter results, CEO Henrik Poulsen told journalists and investors that the company recorded average wind speeds at its projects of 7.7m/s – down from 7.9m/s one year earlier.

In response to a question during the call, Poulsen described fluctuating wind speeds throughout the year: The first quarter was marked by "higher than normal" speeds, followed by a "relatively poor" second quarter, and then a similarly low third quarter – though wind speeds picked up again in September, he noted.

"There is a small net negative effect," he said.

Poulsen added that there were upsides to reduced wind resources: "We tend to progress our constructive portfolio faster when we have low wind speeds, which has a slight offsetting positive effect."

He concluded: "Altogether it is a relatively minor impact on our result year to date."

Vattenfall too downplayed the effect of the wind drought, and in a statement plotted the same pattern of wind speeds shifting throughout the year that Ørsted’s Poulsen did.

The Swedish developer added: "With wind, solar, battery technology all part of Vattenfall’s low carbon energy project portfolio in the UK, the fluctuations we’ve seen are expected and planned for as we develop the future energy mix needed for a climate smarter future."

Clearly, not all industry players felt the heat this summer, especially tthose with large offshore portfolios. But wind farm operators and power purchasers alike should be mindful of weather risk, according to underwriters and risk management companies specialising in the energy sector.

Policies typically pay out compensation for revenues under expectation when caused by a lack of wind resource, Taunton-Collins explained. If a certain output is not reached, the product will pay out proportionately.

Following the summer wind drought, underwriters expect to pay more than normal this year, he said. However, although GCube received more enquiries about policies over the summer, insurance against weather-related losses is not routinely bought.

There is, he said, a paradox related to those who buy weather-related insurance policies, and those who do not. "Big players with geographically diverse portfolios and a financial team who can analyse it don’t need this kind of product.

"However, those who are not big enough to have those advantages are the people who probably need it most."

On the buyer side, too, companies are exploring potential solutions to managing weather risk.

Microsoft, which has signed more than 1.2GW of corporate power deals for renewable energy, has developed two variations of traditional power purchase agreements (PPAs) that account for wind’s "inherent intermittency" and transfers the risk of wind resources away from a buyer ill-equipped to manage it.

Prior to signing a proxy generation PPA, a wind farm operator would calculate the expected operational efficiency of a project, based on projected turbine losses, transmission losses, and anticipated downtime for scheduled maintenance. It would also take meteorological measurements taken at the site, and form a view as to the value of the power curve over the term of the transaction. Together, these data provide a predicted output for a wind farm and enable the buyer and seller to agree a fixed price for the PPA.

It also creates a threshold for the project’s owner to aim for to make the transaction economically efficient for the power purchaser.

If the wind farm outperforms this expectation it could benefit the owner, as it could sell excess power on the grid, Orrick partner Giji John suggested; if it underperforms, this would be detrimental to the owner, as it may have to compensate the buyer without offsetting revenue from power sales to the grid, he added.

"By calculating the settlement of a proxy generation PPA based on the measured input (fuel) as opposed to the measured output (energy) the buyer avoids taking on exposure to the project’s operational risk," the three companies explained in a white paper published in October 2018.

An evolution of the proxy generation PPA is the volume firming agreement (VFA), which reallocates the risk related to future weather conditions to third parties better equipped to manage it – insurers, for example – than smaller companies and retailers unable to manage wind power’s variability.

VFAs are not a replacement for traditional PPAs, but a supplementary contract that transfers risk to a third party, Microsoft advises.