The fall has been attributed to coal’s declining use in the electricity power sector, the EIA said, with lower prices for renewables and natural gas reducing its utilisation.

In the 11 years since its peak of 313GW of online capacity, 55GW has been retired, with a third of the number of generators closing. 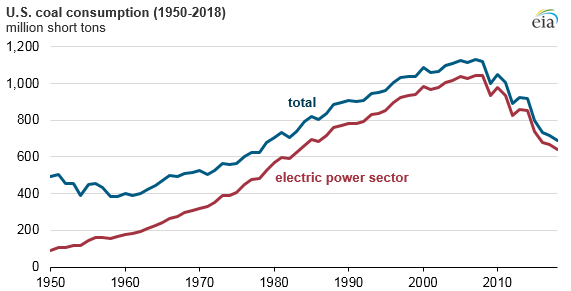 Roughly 14GW of coal-fired capacity is expected to retire in 2018 alone, which would be the second highest annual total on record, despite supportive rhetoric from the federal administration.

"[A] period of sustained, low natural gas prices has kept the cost of generating electricity with natural gas competitive with generation from coal," the EIA noted.

"Other factors such as the age of generators, changes in regional electricity demand, and increased competition from renewables have led to decreasing coal capacity," the government body added.

Meanwhile, Denmark’s annual energy statistics revealed the consumption of coal for the production of heat and electricity had fallen 25.5% in 2017, compared to 2016.

Consumption of renewable energy grew 11.4% between 2016 and 2017, the Danish energy ministry added, while CO2 emissions fell 6%.

"The numbers speak for themselves. When we succeed in replacing coal with renewable energy, we also emit less CO2. And by 2017 the numbers are so significant that there is no doubt that developments are heading in the right direction for our climate," said Danish energy minister Lars Lilleholt.