The 100MW/129MWh battery was provided by US firm Tesla in response to a series of blackouts in South Australia in 2016.

It was installed beside the 314MW Hornsdale wind complex in South Australia, developed by French company Neoen. It is the largest lithium-ion battery storage system currently operating in the world.

Since being completed in December 2017, it has been providing frequency response and ancillary services to the National Electricity Market (NEM) across southeast Australia.

A new report by consultancy firm Aurecon found HPR "delivered on the high expectations of its performance and market impact".

Among its findings, the report found HPR allowed the removal of 35MW of capacity payments from the Frequency Control Ancillary Service (FCAS).

"For system security purposes, [the Australian Energy Market Operator] has historically required the local procurement of 35MW of regulation FCAS in South Australia at times when the separation of the region at the Heywood Interconnector is a credible contingency.

"During these times, South Australian FCAS prices have been very high due to the limited number of suppliers of these services in the region.

"Aurecon estimates that the additional regulation FCAS cost due to the 35MW FCAS constraint over each of 2016 and 2017 approached A$40 million.

"HPR commenced operation towards the end of 2017 and during Q1 2018, it captured nearly 10% of the raise FCAS market in the NEM, displacing higher priced (predominantly coal) supply.

"During Q4 2017, the constraint bound for 20 hours resulting in approximately AUD 8 million of additional FCAS costs whereas during Q1 2018 it bound for 13 hours without significant cost impact due in part to HPR’s contribution to the South Australian FCAS market," the report found. 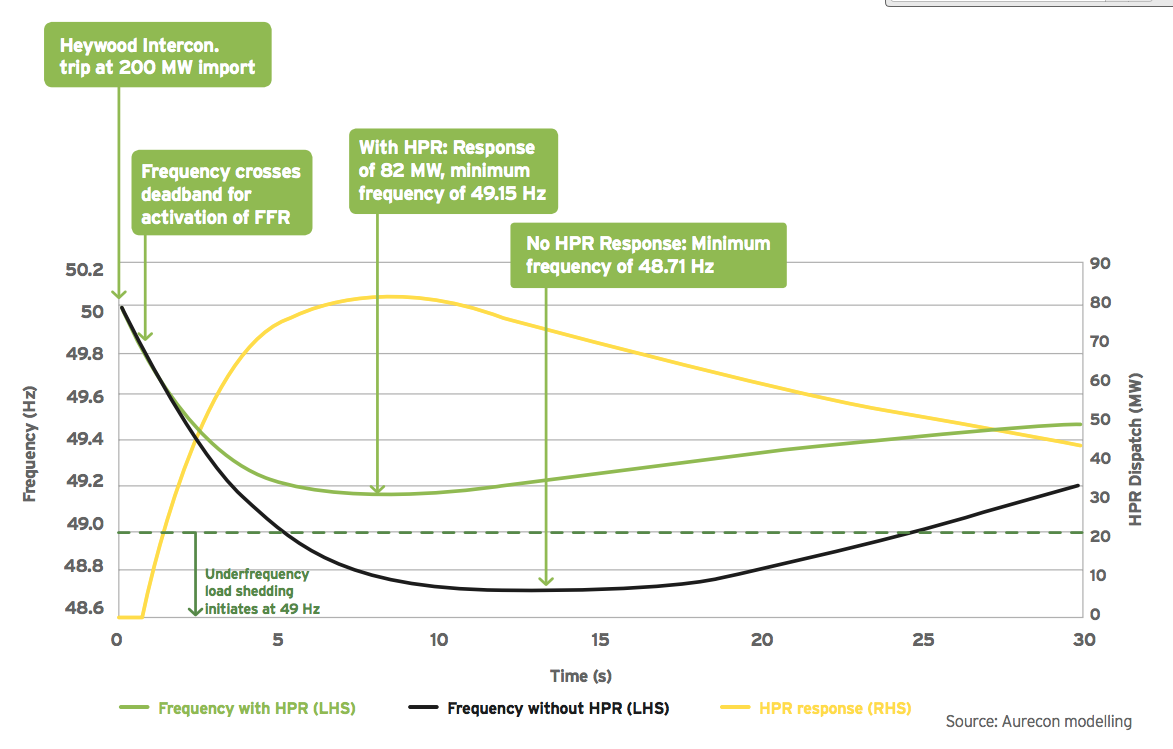 "HPR’s Fast Frequency Response provides a premium Contingency FCAS service on the NEM with the speed and accuracy of its response.

"Modelling demonstrates its potential to provide significant support to arrest falling frequency due to contingency events which, in some cases will avoid or reduce the activation of load shedding," the report added.

HPR also helps to protect the Heywood Interconnector between South Australia and Victoria. It means South Australia is not left isolated as often as previously in terms of grid operation.

The interconnector had been known to trip at times of low frequency, resulting in blackouts in South Australia like the one seen in September 2016, Aurecon said.

The HPR can provide 100MW of output to the grid in less than 150 milliseconds, Aurecon said, stabilising the frequency and avoiding possible load shedding.

The report added the addition of similar control services would help to further maintain the grid’s frequency within its normal operating range.

Aurecon’s energy leader, Paul Gleeson, said: "Reviewing the data from Hornsdale Power Reserve’s first year of operation has given us real insights into the capabilities of this new technology, including how these fast response systems can help improve stability, reduce the likelihood of load-shedding events, and contribute to the reduction in wholesale prices.

"The data is telling us that these fast response systems can help us optimise the way Australian’s energy system works".

"It enables their deployment to support the ongoing energy transition and will continue to prove the value of similar investments.

"Hornsdale Power Reserve is an example of the projects that will underpin a modern energy system in Australia."

Neoen has also announced the start of construction of a 6MW/6MWh storage project in France to provide frequency response services.

It is due to be connected to the French network in February 2019.